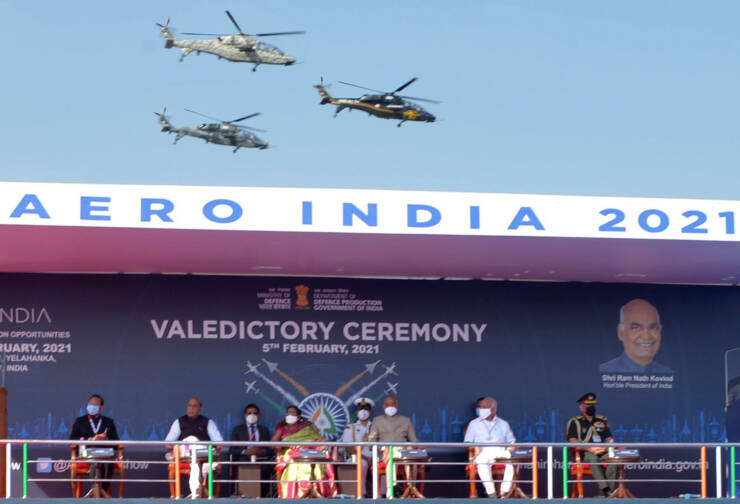 Bengaluru. Curtains came down on the mega three-day international event Aero India 2021 on February 5 in Bengaluru where 201 Memoranda of Understanding, product launches and technology transfers were concluded to provide further impetus to the aerospace and defence industry of the country. The valedictory function was graced by President Ram Nath Kovind and First Lady Savita Kovind.

Over 600 exhibitors attended physically and another 108 in virtual mode. Around 3,000 Business-2-Business meetings were conducted during the event and representatives from 63 foreign countries were in attendance. The 13th edition of Aero India in its 25th year was organised amidst COVID-19 challenges as the world’s first ever hybrid defence and aerospace exhibition with no public days and a concurrent virtual exhibition.

In his address President Ram Nath Kovind said, India is not just a market, but a land of immense opportunities for the whole world, including in the defence sector. He added that the government has taken a number of policy initiatives aimed at placing India among the top nations in the defence sector with twin objectives of self-reliance and export promotion.

The President said that the government is focused on promoting the ‘Ease of Doing Business’ to encourage manufacturers to set up units in India. He that the reforms initiated in India in the last six years offer unprecedented opportunities to investors and private companies in the defence and aerospace sectors.

The President said that Aero India 2021 is a living proof of India’s ever-growing strength in the defence and aerospace sectors at the global level. The event has exhibited that the global confidence in India’s capabilities is growing steadily.

Referring to the Conclave of Defence Ministers of Indian Ocean Region (IOR), on the theme of ‘Enhanced Peace, Security, and Co-operation in the Indian Ocean’, which was organised on the margins of Aero India 2021, the President said that India has always been an ardent advocate of universal peace and development. It is important that IOR nations focus on fostering political, economic, cultural and defence co-operation, he added. 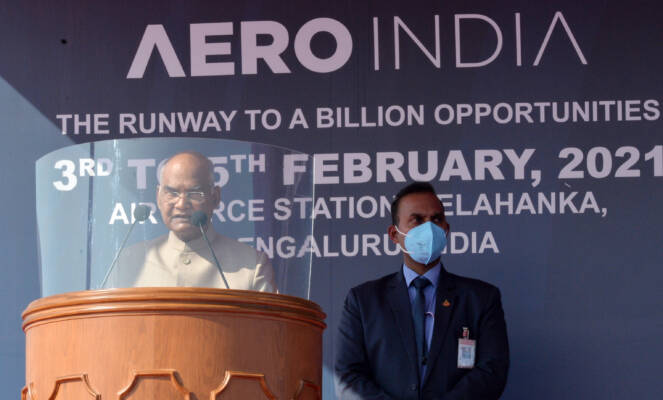 He said the large number of MoUs concluded during the event and orders of over Rs 203 crores bagged by MSMEs were an indication of the exhibition’s success. He emphasised that it also carries positive implications for safety and security, not just of India, but the entire region.

The Defence Minister informed that the first ever IOR Defence Ministers’ Conclave was attended by ministers and delegates from 26 countries. He said that discussions focused on synergising efforts of IOR countries in the Indian ocean and expressed belief that there would be a higher level of cooperation among IOR countries on peace and security in the future. A conclave of Chiefs of Air Staff was also organised to pursue the objectives of collaborative security for the region and beyond.

He also referred to the iDEX ‘Start-up Manthan,’ the sixth India-Russia Military Industrial Conference and said various seminars held on wide ranging themes would help in achieving twin objectives of Atmanirbharta and Defence exports. Rajnath Singh reiterated that Aero India 2021 would help in achieving the target of a turnover of Rs 1,75,000 crore, including exports of Rs 35,000 crore in aerospace and defence goods & services by the year 2024. In the last few years the Armed Forces had given significant support to the mission of ‘Atmanirbhar Bharat’ and played an important role in promoting domestic industry.

The Defence Minister reiterated that ‘self-reliance’ does not mean isolation from the world or act as a closed economy but promotes globalisation by making India a more competitive player on the global stage and inviting the global companies. He said that India will invest around US$130 billion towards enhancing security by military modernisation in the next seven-eight years.

Singh concluded his address by thanking officials of the Ministry of Defence, the state administration led by Chief Minister BS Yediyurappa who was present in the function, Hindustan Aeronautics Limited and other officials who worked in organising the event.

The gathering at the valedictory were treated to a spectacular flying display by the amazing pilots of the Indian Air Force.