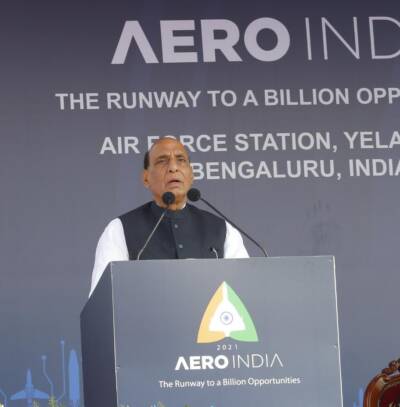 Bengaluru. Defence Minister Rajnath Singh said that with focused attention being laid on promotion of exports of Indian defence products, India is steadily marching from ‘Make in India’ to ‘Make for the World.’

The Defence Minister was speaking at his inaugural address of Aero India 2021 at Yelahanka Air Force Station in Bengaluru on February 3.

He said a high level committee has been constituted, which would authorise exports of major indigenous platforms to various countries leading to faster approvals for their exports.

India has the potential to become a reliable supplier of defence equipment to many of its friendly foreign nations. “We have a strong and diversified Micro, Small, Medium Enterprises (MSMEs) with more than 5,000 active units in this sector,” he observed.

“Our vision is to make India one of the biggest countries of the world in Defence sector from design to production with active participation of public and private sector.

“To achieve the twin goals of self-reliance and exports, we have set a target to achieve a turnover of Rs 1,75,000 crore including export of Rs 35,000 crore in Aerospace and Defence goods and services by the year 2024,” the Defence Minister said.

Earlier welcoming the dignitaries he said: “A hearty welcome to you all to Aero India 2021. I am delighted to see the Defence Ministers, senior defence officials and business leaders from around the world in this 13th edition of Aero India, the largest Aero show of Asia.”

He noted that in the universe of aviation this show is one of the brightest galaxies that is accompanied by a wide variety of options, solutions, partnerships and most importantly opportunities.

The year 2020 has been a challenging year for the entire world, and has adversely impacted the lives, livelihood, industrial growth, and economy of many countries.

India has endeavoured to bring out not one but two indigenous vaccines and started the largest vaccine drive to inoculate 270 million people. “Our concern extends to people across boundaries, under which India offers more than 20 million doses to friendly countries,” Singh said.

“Despite the constraints caused by the global pandemic, I am pleased to see such a large number of participants in this year’s event. It is coming from the world’s leading nations in the field of military and aviation.”

The Aero India 21 will display the vast potential and the multifarious opportunities that India offers in the field of defence and aerospace sector. It also promises to be the World’s First Ever Hybrid Aero & Defence exhibition.

In order to maximise the reach and participation, the event is being conducted in a hybrid format with a concurrent Virtual Exhibition which will integrate the Seminars, B2B interactions etc. It will not be incorrect to say that Aero India 21 has truly gone digital and global.

He informed that 540 exhibitors including 80 foreign companies, Defence Ministers, Delegates, Service chiefs and officials from more than 55 nations are participating in the event which reflects the growing optimism of the global community.

“I am personally grateful to you all. I express my deep sense of gratitude to the Defence Ministers from Maldives, Ukraine, Equatorial Guinea, Iran, Comoros and Madagascar, who have joined this show in person, and many others who are joining virtually,” the Defence Minister said.

“We have taken many steps to strengthen our security apparatus recently. Domestic manufacturing of bigger and complex defence platforms has now become the focus of our policy under the ‘Atmanirbhar Bharat Abhiyan.’ We plan to spend US$130 billion on military modernisation.

“The sector has been further opened for foreign sector participation and we are encouraging foreign OEMs to set up wholly owned subsidiaries or enter into strategic partnerships with the Indian companies,” the Defence Minister noted.

Newly introduced (Buy Global – Manufacture in India) category of capital procurement in Defence Acquisition Procedure (DAP) 2020 allows outright purchase of equipment from foreign vendors followed by indigenous manufacture through its subsidiary in India or through a Joint Venture or through an Indian Agency.

Over the years, the Government of India has facilitated establishment of wide-ranging production facilities of various defence equipment through Defence Public Sector Undertakings (DPSUs) and Ordnance Factories (OFs).

“I am happy to inform that the reforms aimed at bringing ease of doing business (EODB) have shown good results. India has recorded a jump of 14 positions against its rank of 77 in 2019 to be placed now at 63rd rank among 190 countries assessed by the World Bank,” Singh added.

Commenting on growth of civil aviation sector, he said India is one of the fastest growing civil aviation markets in the world. With rising passenger and cargo traffic, demand for aircraft and the related supply chains is increasing. India therefore holds a huge potential for investments in the aerospace sector particularly in manufacturing of aero engines and sub-assemblies as well as in Maintenance Repair & Overhaul of aircraft.

“I invite the business leaders from across the globe in this field to take advantage of the various initiatives of the Government of India and set-up manufacturing units in our country,”

Speaking on HAL receiving order from Indian Air Force of manufacturing Tejas recently, the Defence Minister said: “I am very happy that HAL has got the orders for development of 83 new indigenous Light Combat Aircraft (LCA) – Tejas Mark-1A from Indian Air Force valued at more than Rs 48,000 crore, it is probably the biggest ‘Make in India’ Defence contract till date.”

He opined that Aero India 2021 will boost investment, expand manufacturing ecosystem, support enterprises, appreciate and enhance the technology levels and propel the economic growth for the country.

“India has a vast coastline, but our interests also lie beyond our shores. It includes our people who reside and work across continents, especially in Indian Ocean Region. It is our bounden duty to remain capable and willing to assist them in times of natural calamities and security challenges,” Singh added.

“I am happy to see that this edition of Aero India has laid the strong foundation, of this great vision with Indian Ocean Region Defence Minister’s Conclave. It is themed on ‘Enhanced peace, Security and cooperation in the Indian Ocean Region.”

India also faces threats and challenges emanating from multiple fronts. India is a victim of state sponsored and state inflicted terrorism, which is now a global threat. “We have long witnessed unfortunate attempts to employ force to change status quo along our unresolved borders. India is vigilant and prepared to counter and defeat any misadventure to defend our people and the territorial integrity at all costs,” the Defence Minister emphasised.

“Our resolve towards this end is shown by our growing defence capabilities. The Aero India 21 will showcase this commitment. The Seminars section in Aero India is also powering the dream of ‘Atmanirbhar Bharat.”

“I am confident that these three days will prove to be productive and fulfilling. I am also sure that our shared vision and values will forge new relations and carry forth the existing relationships and associations to the next level,” he said.

Later, the Defence Minister thrown open Aero India 2021 to the business delegates, foreign delegates, academia, media and all other stakeholders, who have been allowed to visit the Asia’s largest airshow under the strict Covid-compliant scenario. “Now, I declare Aero India-2021 open, and wish for its mega success,” he concluded.