Pakistan has arrived. It is neither a rogue state or a failed state alone. It is also a state full of all viruses. It alone classifies to be the living black hole on Earth.

The articles are from Pakistani sources and views are Pakistani

I have plagiarised them

Whatever is in italics is my originality

That is why these are insider views! 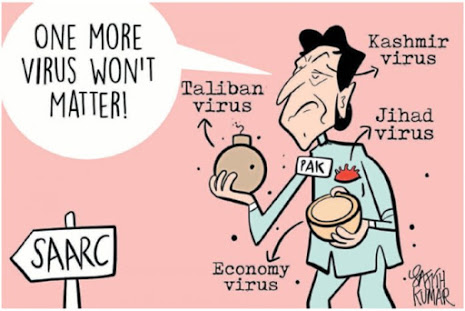 The article is supposed to be about US China strategic competition. However it degenerates into Indo US cooperation and implications for Pakistan. The author is very worried that while India has been mentioned 31 times, Pakistan gets only a passing reference in a US document. Interesting read for all military professionals. In January this year, the Centre for a New American Security produced a report Rising to the China Challenge on the request of the US Congress, laying out the exact strategy and ideological basis for this containment…..

The report notes that the US has an advantage in the number of regional allies and partners it has, such as Australia, Japan, South Korea and Thailand, and notably mentions India a total of 31 times. By contrast, the only mention of Pakistan is a hyphenated one, occurring in the context of the Indo-Pakistan border……

As for us, we know that while India may acquire capabilities against China, those capabilities will be first used against us. Will we be forced into a camp or can deft diplomacy reap us some benefits? Either way, things are about to get interesting, once again.

Gwadar is being ring fenced and Makran is being termed South Baluchistan. This is new and interesting. Connect it with the new CPEC authority under the Army. Link it with the loans taken from China. Is this area being handed over to the Chinks? Interesting to watch how things go. All things apart, Pakistan will soon be the largest open jail in the world. 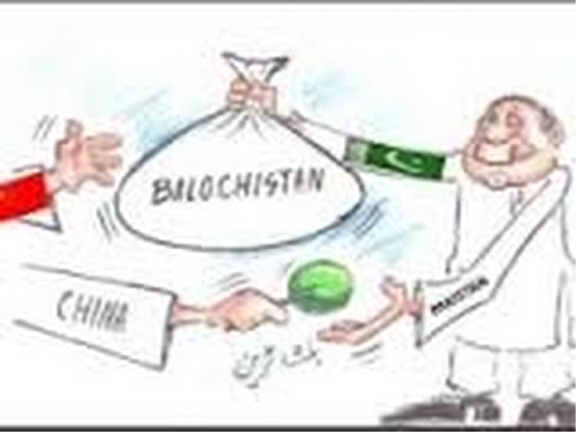 IF fenced as planned, Gwadar will become the first ‘sealed’ city in Pakistan on the premise of security. Apart from the pros and cons of the plan, as well as the public’s reaction and the opposition’s criticism, it reflects on the state’s approach to responding to security challenges…

…At the same time, the new term ‘south Balochistan’ to describe the region historically known as Makran is making locals suspicious; they believe it could be an attempt to separate the region administratively from the rest of the province….

…. According to the new city plan, two entry and exit points will be established, which would provide a sense of safety to the Chinese workforce and non-Baloch residents in the city…

…It was India that first fenced its border with Pakistan. After the completion of fencing its borders with Afghanistan and Iran, Pakistan will become a fully fenced country….

…Perhaps Pakistan needs a comprehensive review of its national security priorities and practices. The process of camouflaging ourselves in barbed wire, which started from the Afghanistan border and resulted in the fencing of our border with Iran, has now transformed into fencing our cities.

The author is the British High Commissioner to Pakistan. Typically  British. Typically hypocritic. He talks of climate change, outlines its dangers to Pakistan. He then praises Imran Khan for taking the bold step of announcing a moratorium on new coal power plants. I am sure he knows that the moratorium is post CPEC. By then Pakistan will be one of the most polluted countries in the world. Wonder about the Britishers. They created this polluted nuclear beggarised failing frontline state and seem to be proud of it. Much like the father who will never believe that his son was a murderer of his mother. 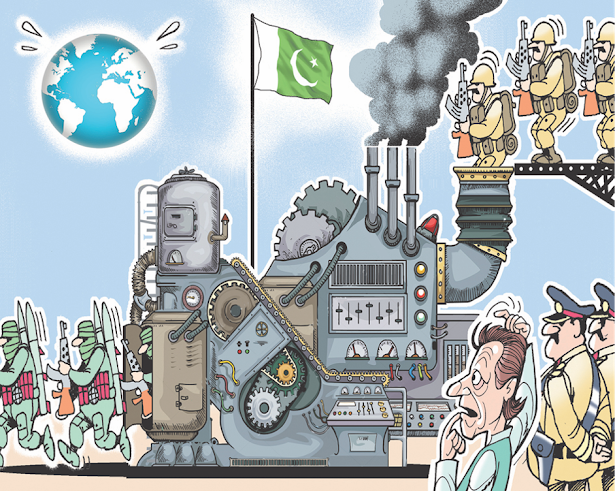 Temperatures are rising, floodwaters are spreading and crops are failing. Pakistan remains the fifth most vulnerable country in the world to climate change despite only contributing one per cent of global emissions. For Pakistan, climate change could be catastrophic. It will mean glaciers melting…

The summer monsoon flooding which hit Karachi and parts of Sindh was a stark reminder of the tragic consequences of climate change. Temperatures rising as a result of climate change are having an impact on rainfall patterns, making some areas drier and some wetter. All this in a country which is reliant on the Indus River Basin for more than 65pc of its irrigation. It will ultimately mean more pressure for water on the very poorest in society…

Prime Minister Imran Khan spoke to those leaders to set out Pakistan’s commitment and leadership on nature-based solutions. But then he went further and took the bold step of announcing a moratorium on new coal power plants. This ground-breaking commitment from Pakistan was a powerful message to other countries. It shows the world there does not need to be a choice between economic growth and protecting the environment for future generations…

Ah ! Chickens come home to roost or the pigs burning the sty down? The good and bad taliban seem to have joined hands. At least 25 people are reported to have been injured on Sunday in a blast near Rawalpindi’s Ganj Mandi Police Station. According to rescue 1122 officials, 22 people were taken to the District Headquarters Hospital, whereas three were treated on the spot. Their condition was stated to be critical. Out of $2 billion, Pakistan is now set to return the $1 billion on coming Monday, said the sources in the finance ministry and the State Bank of Pakistan (SBP). The remaining $1 billion is due in January.

We all know Pakistan is going through an economic downwards spiral since a long time. The author has described three spirals here. There are many more spirals including water shortage, foreign reserves and so on. The rate at which new spirals are coming out of Pakistan; very soon naya pakistan will resemble a broken spring cot! 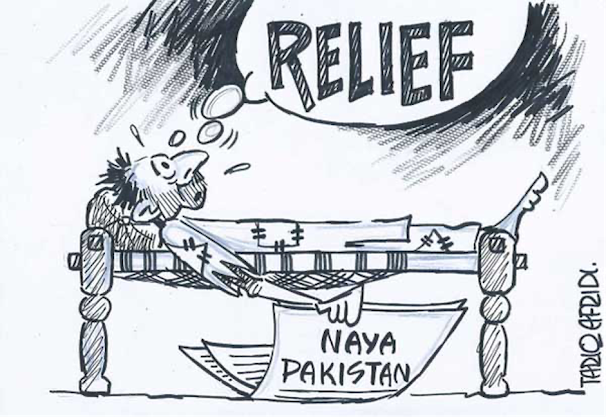 IT has been said before, in the recent past, in this space and it bears repeating today. This never ends. This lurching from one crisis to the next is, and will remain, a constant feature in our lives because the central problem will remain in place. That problem is simple. Nobody is in charge here. Everybody has their specific agendas that they are busy securing and there is nothing that ties it together at the top.

This winter the government gave us the third such spiral, each more fierce than the one that came before, and in each the central causes were the same: poor administration and control.

No sooner than the food price spiral began to fade from the headlines than we had news of a colossal blunder in the import of LNG. For some inexplicable reason they did not order any LNG for the winter as is standard practice back in the summer (usually by August) when it can be booked in advance for winter delivery at rates cheaper than what are available closer to the delivery date. 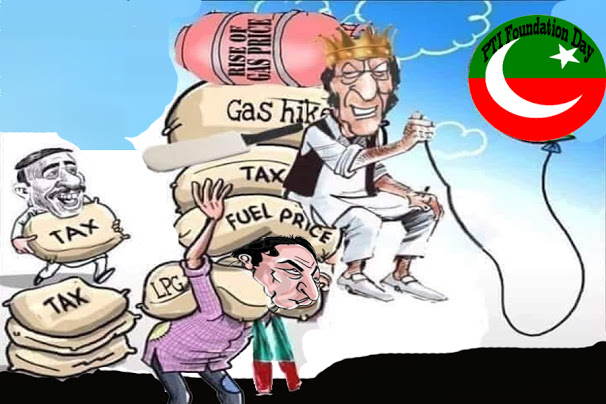 After LNG there is the power sector and mounting circular debt that is refusing to subside and no discernible action plan is on the horizon for how to tackle this problem.

Failure to manage the food supply chain, particularly procurement, gave us a food price spiral, controlling which is taking large government expenditures and foreign exchange. Failure to manage the LNG supply chain will give us expensive gas, which will either be passed on to consumers or heavily subsidised, which means it will be passed on to taxpayers instead (adding up to much the same thing). Failure to manage the power sector will give us a circular debt, which will result in higher power tariffs since the IMF will not allow using government resources to continue underwriting power-sector mismanagement.

Pakistan is running around like a spooked hare expecting another surgical strike. The reality is that it will never happen the way they expect it. When it happens Pakistan will feel the pain. On a different note. Every court needs a jester. This foreign minister of Pakistan is the prefect one. With his head in the sand of course. 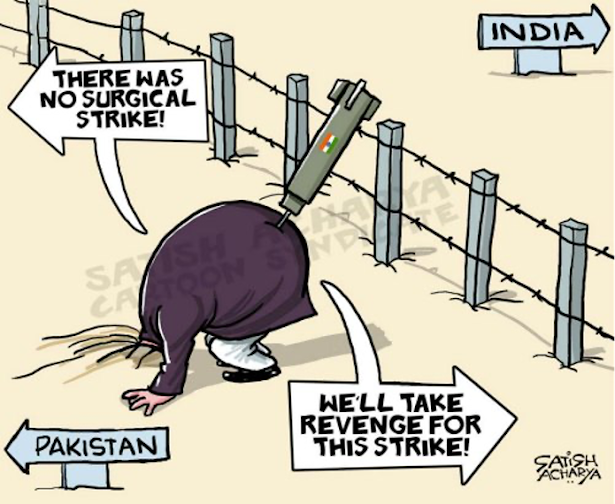 Informed sources told Dawn earlier this month that the Pakistan Army had been put on high alert amidst a possible threat of another attempt by India to conduct a surgical strike inside Pakistani territory.

The author is a former ambassador of Pakistan to the USA, India and China. Important man. Towards the evening of his life he has realised the reality of the country he represented. Better late than never. Obviously no one is bothered about him anymore. However after representing many falsehoods for years he has finally spoken the truth. All the best to him and his people. he is part of the problem and not apart from it.

FEW people in the world have been so consistently betrayed by their leaders, governments, political parties and security institutions as the people of Pakistan. They have been lied to; denied basic human rights, dignity and entitlements; robbed of essential human development resources to finance elite priorities and lifestyles; induced to look to the hereafter for justice, etc. Within this anti-democratic and anti-people system, minimal alleviating initiatives are touted as the fulfilment of promised reforms.

Today, ‘hybrid war’ is being waged against the people. A shadow democracy fronts for undemocratic rule. Those who have constitutional legitimacy have no power largely because they have no competence; and those who have power have no need for competence and absolutely no constitutional legitimacy. The people who are driven towards life below the poverty line are too distracted by the need to survive, while those precariously or safely above this line are either too insecure to do much or too secure to want to do much. Elite constituencies play games with each other and, win or lose, the people forever lose.