THE CHINESE CAMEL IN THE QUADRATIC TENT 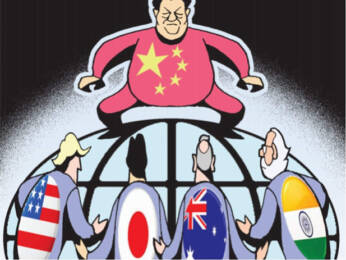 There are a lot of issues with an USA led world order. It is not perfect by any stretch of imagination. However, a Chinese led world would be even worse. To predict that, one does not need even imagination. All one has to do is to look around with open eyes – coercive diplomacy, wolf warriorism, breaking international rules-based order, debt traps and more. Lack of trust in China is palpable. China does what is good for itself resulting in debilitating other nations and its people. It can continue to ‘rejuvenate’ and have its ‘dreams’, but it must be contained for the common good. China is too big for any one nation to contain. It is also beyond regional nations to control it. That is the sense I got after participating in two webinars recently. One organized by the Indo Japanese Chamber of Commerce and Industry. The other by CASA. The participants were international, and the views were wide-ranging. The insights indicated that there is no alternative to the QUAD 3.0.

This is reinforced by sharp increases projected in the forthcoming Chinese defence budgets. For a country like ours, it is foolish to get into the trap of competitive increases of defence expenditure with China with a ‘go it alone’ approach. In a larger sense QUAD 3.0 is not only an international necessity but a national imperative. It enables us to have an affordable security on a collective basis. However, QUAD 3.0 is still an idea without a form. More importantly as much as the QUAD nations bring value to the table, they place huge differences on it too. If QUAD 3.0 is to evolve further, it is these differences which have to be tackled. They need to be either resolved, skirted around or left out of the ambit for a later date. The QUAD 3.0 platform will only be as strong as the way the differences are treated. Thankfully, China is driving the QUAD3.0 to set aside its incongruencies. The more predatory the Chinese behavior, the greater will be the coalescence. Newtons third law is at work. Before looking at other issues let us reiterate the potential. The QUAD 3.0 is ideally positioned to lead the post pandemic world economically, diplomatically and militarily. After all it is a combination of a superpower and three middle level powers which are vibrant democracies representing three civilizations – Western, Japanese, and Indian. They represent four of the top twenty global economies with a healthy mixture of raw material, manufacturing, and consumer power as also a tremendous innovation capability. The QUAD nations also have experienced armed forces irrespective of their size or national orientation. They also have strong internal bilateral and trilateral ties. From any point of view, they have the potential to outmatch China in any dimension. However the real challenge before them is to convert the bilateral and trilaterals into a strong quadrilateral frame work which can carry along regional players like ASEAN, QUAD plus nations and EU.

The QUAD 3.0 is an idea which will take time to form into anything potent. That statement is both right and wrong. Let us understand the wrong part. If signals coming out of China are an indicator, they are worried about the QUAD. In my surmise, China fears it. The QUAD is amorphous and ambiguous. China will desire that it remains so. It will do its utmost to sow differences and enhance the ambiguity. The more it does so the more it will drive the QUAD to assume a definite form. China has this habit of spurring people into action. So whichever way one looks at it – Chinese behaviour to pole vault to the top predatorily or its attempt to sow dissent will lead to the inevitability of the QUAD 3.0 assuming shape. Turning to ambiguity, this carries a threat of its own. It will be unclear as to how the form will emerge and where it will hit China. Hence they have to guess and prepare for a wide range of undefined options; which will auto-correct the situation. In this entire range of possibilities, one issue which is not ambiguous is the military capability of QUAD and the level of existing cooperation.

The value of the QUAD truly lies in its potential to present an alternative economic model to the Chinese one to the world. However the dependence and intertwining of the QUAD nations with the Chinese economy is also a reality. Also the QUAD nations have different economic outlooks and interests. These divergent issues will take time to resolve since there are huge ‘peoples issues’ involved. Many of them are intangible and vexatious. They need time to evolve. On the other hand, the military value of QUAD is relatively lesser but easier to realise. There is already some level of understanding achieved. Also there is no necessity for a deep level of interoperability or interdependence to pose a credible military threat to China in any domain. If one has learnt anything in the past year it is that China should permanently be posed with a two front situation.

If QUAD 3.0 is to evolve further, it is these differences which have to be tackled. They need to be either resolved, skirted around or left out of the ambit for a later date. The QUAD 3.0 platform will only be as strong as the way the differences are treated

The two front situation of facing India in Eastern Ladakh and USA in the South and East China Seas, contained China fully. China backed off from any cross straits action against Taiwan in this period, despite the fact that it had recovered from the pandemic, US forces were debilitated by the pandemic, Taiwan was vulnerable and there was a nationalistic hype to do so. Creating such situations does not need interoperability. It needs political will. Further defence cooperation and arrangements generate economic linkages and generate trust at people level. Hence the large idea is use the militaries to form the QUAD 3.0 and then transit to the economic agendas. Militaries by nature, are petty cut and dry in getting the job done. With a troublesome adversary like China, all militaries will like to get the job done faster! The militaries will be accompanied by diplomatic and political moves which will generate the desired synergy.

There is also a need to understand that the QUAD nations have an ‘odd one out’ phenomenon. Economically, Japan, USA and Australia are rich nations and India is a poor nation on a per capita basis. Constitutionally, USA, India and Australia have no military restrictions, but Japan can take up arms only for self-defence. USA, India and Japan have military disputes with China, whereas the Australian dispute is more economic. USA, Australia and Japan are more Pacific Ocean focused whereas India is more Indian Ocean focused and is the only country to have a large land border with China. USA is an extra-regional player whereas the others are not. In any sphere of activity, one country is different from the other three. This ‘odd one out’ phenomenon will keep putting some difference or the other on the table. The need to understand the constraints and conditionalities of this ‘odd one out’ construct and behave accordingly is very important. Contentious issues need to be skirted around. Otherwise QUAD will play as per the Chinese game plan. To some extent that has already happened with Japan and Australia joining RCEP. QUAD3.0 has to give serious thought to take matters further.

One of the ways to do that is to look at what can be done and build on that rather than what is difficult to achieve. The do-ables are clearly military and diplomatic in nature. Hence after the QUAD foreign ministers meet , it is time to have a QUAD defence ministers meet or a QUAD 2+2 dialogue. Further some military to military programs and exercises should commence. The Malabar series is a good platform to build upon. The Armies and Air Forces should have similar exchanges in the QUAD forum. Very clearly military issues which can be progressed on common structures are intelligence sharing, logistics basing, perception management, and common communication protocols. Enhanced training and periodic military conferences are part of this. In addition there is significant room for defence industrial cooperation. Defence Industrial cooperation can be extended into economic cooperation. If China expects an Asian NATO why not give it what it expects – ambiguously or otherwise? Use the perception value of this expectation.

The Indo Pacific concept has its roots in the 2004 Tsunami. Very importantly, the region is also disaster prone – major earth quakes, floods, typhoons/storms. Hence HADR is a good place to start from. Invariably, the resources required for HADR operations are specialist and similar to those required for military purposes. There is also a requirement for the QUAD to seriously look at combating climate change. Overall HADR and Climate change have the potential and ability to boost economies. I will put the common fight against the pandemic in this bracket. It needs serious focus.

A major contentious issue is to have a QUAD economic agenda. The contentiousness stems from the fact that we are looking at old aspects of deep rooted economic structures. The QUAD needs to jettison the brick and mortar economy and chart a path in the new economy where common interests can be put on the QUAD platform without major issues. The subjects which form part of this new economy are over the horizon and digital in nature – AI, Cyber, Space, Energy and more. In these evolving disruptive technologies there is significant scope to cooperate on a win-win basis for all QUAD nations.

The more it does so the more it will drive the QUAD to assume a definite form. China has this habit of spurring people into action. So whichever way one looks at it – Chinese behaviour to pole vault to the top predatorily or its attempt to sow dissent will lead to the inevitability of the QUAD 3.0 assuming shape.

Last but not the least, QUAD needs to provide leadership to the new global order. Gone are the days when one country could lead the way. A multipolar world needs a multipolar leadership based on the QUAD. For all this to happen, QUAD needs some kind of a formal structure. Unless a structure comes in place a road map and action plan will not evolve. The day a road map is put out, red lights will flash all round China. The question is will that happen? I am very hopeful of that since there is intent. All one has to do is look at all the press releases of QUAD nations from the beginning. As days have gone by, the tone and tenor of the press releases indicate a faster convergence of ideas and emergence of an outline plan. Let us hope for the best.