In an article on 5G I outlined how China is waging Multi Domain Warfare (MDW) with Huawei as one of its Trojan Horses. It evoked great response. It also evoked great concerns from some right-thinking people like: –

I agree with the threat posed and China’s game. My apprehensions….it will be BACK TO BUSINESS AS USUAL once the situation normalizes. In the ICT sector nothing gets done which is not made in China or has Chinese parts. Who will fight the L1?

While the PLA has a finger in everything, we do not even have control over the DRDO, HAL, Ordnance Factories or even the MES or the Cantonment Boards.

5G allows China to hide in plain sight. The borders are moving to our homes and Smartphones. 5G and IOT allow Chinese to trigger cyber-attacks from millions of vulnerabilities.

I share their concerns. My worry is also ‘BACK TO BUSINESS AS USUAL’. At the first whiff of normalcy, the bureaucracy will start the familiar game of snakes and ladders. One step forward and many backwards. The Chinese believe in two steps forward and one step back. Some contrasting similarity! Even our PM is said to have remarked that he will not allow our bureaucrats to waste his second term. Telling thoughts.

However. The Virus and Galwan have changed the ‘USUAL’. Everyone understands the Virus. It threatens our lives and lifestyle. So change is forced to a new normal. However the Chinese threat has seeped under the carpet. Galwan has exposed the poison underneath. What is happening in Ladakh is only a trailer. There is a sinisterly dark multidimensional war being waged against India. This will not abate. After the USA, India threatens Chinese superpower dreams. That is why China is in military conflict with one and heading into war with another. China will initiate conflict and war despite sleeping in our bed to make trade and commercial profit. Curtailing India will be one of its key national objectives. It will be aggressive and assertive. Whether the assertiveness stems from opportunism, imperiousness, reactivity or insecurity is immaterial. Hence understanding the MDW concept and its Chinese manifestation is important to move to the new ‘UNSUAL’.

The Concept. The Chinese practice the concept of ‘Unrestricted Warfare’. This led the US Army to adopt the Multi Domain Operations (MDO) approach. However MDO is operational and too narrow when applied at a national/international level. A wider understandable concept like MDW is needed to encapsulate the dark approaches of China in conducting war. Clausewitz’s dictum that “war is politics by other means” and conversely “politics is war by other means” encapsulates the MDW spectrum. It can be defined as conventional and/or non-conventional war carried out by state, non-state or state sponsored actors using hard and soft power during war, conflict or peace situations by day or night for specified national outcomes in various interacting and overlapping domains. These multiple domains are represented in the graphic. 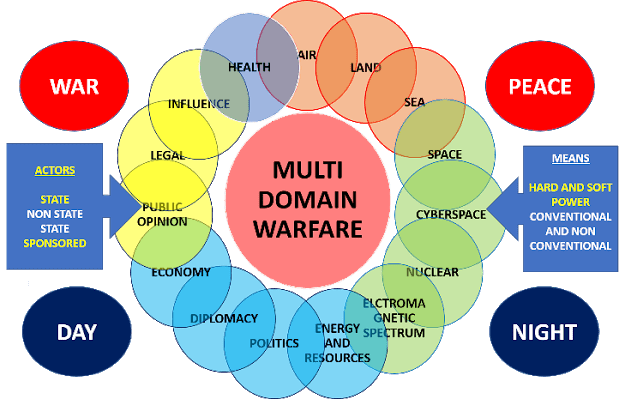 Military Civil Fusion. A leading tool for execution of MDW is “Military-Civil Fusion,” (MCF) . The colonial system gave birth to MCF. It was refined by USA. However China has taken it to a sinister level. The CCP is at the apex of MCF. The troika underneath – Government, PLA and Civilian firms are meshed seamlessly. They front each other interchangeably assisting the CCP in retention or capture of power. Barriers between China’s civilian industry and military – in research, development and trade have been eliminated. Firms like Huawei, ZTE and Bytedance are Trojan Horses of CCP. Their State-Owned Enterprises and Financial system are the main actors. MCF focuses on dual use technologies like quantum computing, big data, semiconductors, 5G, advanced nuclear technology, aerospace technology, and AI. The technologies are developed/acquired legally or illegally. Chinese methods include investment in private industries, talent recruitment programs, academic and research collaboration, forced technology transfer, intelligence gathering, and outright theft. State financing and subsidies are heavy. The core dual use areas are Artificial Intelligence to give them an asymmetrical advantage in warfare, New Materials for high-value industries like aerospace, Energy Storage which is an essential ingredient of battlefield stamina. (China controls the global Li Ion battery chain), Communication which is the lifeblood of societies and militaries and Nuclear Power to control the future nuclear export markets. MCF vastly expands the Chinese economic basket, converts PLA into a technologically advanced military and enables China to conduct a ceaseless MDW. Let us now see as to how China is waging a dark all pervasive Multi Domain Warfare against India.

Premeditated expansionist aggression through conventional Air, Land and Sea domains is manifest in Ladakh and South China Sea. This will continue. India must be prepared for direct Chinese aggression in future also. Simultaneously India needs to prepare for indirect and insidious moves through Pakistan, Nepal, Bhutan, Myanmar, and Bangladesh. Pakistan and Nepal will remain willing catspaws of China. Sri Lanka (Hambantota), Pakistan (Gwadar) and Myanmar (Kyaukpyu) are the seaborne manifestations in waiting.

The disruptive technology domains are now coming to fore. Military strategists and Government ‘Pundits’ need to understand it better to develop counter strategies.

Space. Space technology is an investment. A lot of space exploration is the search for liquid hydrogen to power fuel cells and attain energy dominance. The quest for new materials must be seen in this context. The ability to have a vibrant military and civilian aerospace ecology is an enterprise activity. China’s MCF plays a huge part in this enterprise. The spinoffs are dual use Satellite and Anti-Satellite technologies. In Ladakh, space technology supported their influence ops to beam a Chinese map on Pangong Tso into our bedrooms. Dicey.

Cyberspace and Electromagnetic Spectrum. Chinese exploitation of these interactive and interdependent domains is well established. It has carried out numerous cyber-attacks against India, USA and Australia. Its quest for AI, Communication and ICT technologies through MCF has multiple contexts. Unbridled Profits. Control over governments through communication and social media surveillance. Intelligence collection. Military prowess. These two key domains underpin Chinese domination in other domains.

Nuclear Domain. The nuclear domain is not confined to nuclear war. It extends to proliferation for geopolitical control through Pakistan, N Korea and now probably Iran. A dangerous nuclear grouping. It is also about use and denial of nuclear energy. Chinese efforts to block India from Nuclear Suppliers Group is essentially denial of nuclear raw material. It delays India’s efforts at achieving critical mass in the Thorium cycle, which is our path to strategic independence.

Chinese ‘Three war’ strategies of Public Opinion, Legal and Influence ops are dark power domains. They exploit the power of information and data in a continuum. The CCP conveys political intent through these domains and prepares ground for other domains to succeed.

Public Opinion. China weaponizes public opinion by manipulation, misinformation, sowing dissent, and discord in democratic societies. It shapes domestic and international public opinion blatantly through media, military experts, and political parties. A halo is built to make the Chinese look ‘Ten Feet Tall’ and invincible.
Legal Status. China always portraying itself as a victim while blatantly violating the international rules-based order. Legal justification, through mythical history, is standard. Others are accused of breaking rules. Most importantly, the legal loopholes of democracies are exploited. Target countries are left with no choice with but to accept the Chinese fait accompli.

Influence Operations. Chinese narratives are being built through pliant politicians, media, and officials. Think tanks, academic institutions, workers unions, industry, and even government is penetrated to influence thought and decision. It will continuously exploit Indian plurality and fissures in the political and bureaucratic firmaments. China will ensure that either a wrong decision or one that favors it is taken.

Economy, Diplomacy and Politics/ Geopolitics are traditional domains. Energy and resource exploitation are historical endeavors by expansionist nations. As China heads into isolation we need to remember – an isolated and poor China was always troublesome and expansionist. A rich and ambitious China will be even more so.

Political. China is a political bully eternally threatening and coercing everyone. This will continue. PLA’s intrusion when Xi Jinping was visiting India was a premeditated hostile political move. The current military aggression in Ladakh is also a well-planned political move. A nation which can declare Dalai Lama as a terrorist and support Masood Azhar displays political perversion. Expect a politically hostile China which will interfere in our internal affairs at every turn. The Pakistani threat is peanuts in comparison.

Economy. China makes countries economically intertwined and dependent upon it. Thereafter it coerces and threatens them to defer to its political requirement. Many countries are subject to such threats including the USA. China undermines the International financial system to debt trap weaker nations. India’s commercial dependency on China can be weaponized any day now. That will definitely force India into the next ‘UNUSUAL’ .

Diplomacy. The Chinese ‘Wolf Warrior’ diplomacy has been loutish to say the least. It seeks to undermine the target country’s sovereignty unambiguously. It happened in Australia recently and we could expect it to happen anytime.

Energy and Resource Exploitation. A rising China is thirsty for resources and energy. It is sucking out mineral and oil resources from Africa through the BRI and debt traps. India must expect trouble. We have spurned all their schemes.

China has weaponized health through the Wuhan Virus. It let the Virus out deliberately. Mask Diplomacy was used to threaten countries which did not toe its line. The recently launched Health Silk Road as an alternative to the BRI is a new front.

China is waging a 360-degree MDW systematically against India. This will continue whether China becomes a superpower or not. China’s comprehensive national power outweighs India’s. We therefore have two choices. We partner with China or not. Partnering China means that we will become Pakistan Mark 2 eventually. That is not acceptable to any self-respecting Indian. Hence, we must contest China comprehensively. Resultantly India must build its strength across all domains. Business as usual is no more an option. INDIA MUST MOVE TO BUSINESS AS UNUSUAL.

India can thwart China presently. However it cannot contain China on its own. As per our national policy we cannot be part of an alliance. Hence, we must BE PART OF A STRATEGIC PARTNERSHIP. It could be the QUAD or QUAD plus or any other with a focused geopolitical, military, and economic agenda. Partners need not even come to each other’s direct aid except in dire emergency. A differentiated but synergistic approach based on common intelligence, capacities, and purpose is good enough.

An economic revival necessitates grasping opportunities. We are strong in ICT and auto sectors. We can attract relocation in these sectors and build around them. If tech companies are quitting Hong Kong, they should be attracted here. Similarly in other sectors. Reforms are needed for attracting relocation and for Atma Nirbharta to take off. China respects strength. Hence the need to strengthen our Armed Forces in certain core areas is paramount. We need to start our own version of MCF. Communication, AI, Cyberspace, aerospace, space, and energy are starters. All in all BUSINESS AS UNUSUAL must be the order of the day. If Government functionaries dither and prevaricate, then India lies exposed. Simple as that.

Lastly, the Chinese Communist Party is an ideology. It cannot be defeated by kinetic means. It must be defeated by counter ideas and ideology – Religion, democracy, or ethnicity. Mythologically, Ravan’s empire started collapsing after Hanuman carried the battle across to Lanka and set it afire. China has four Lankas – Tibet, Xinjiang, Taiwan, and Hong Kong. Time to set some or all of them on fire.