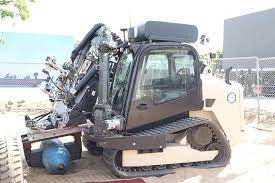 New Delhi: A state-of-the-art Unexploded Ordnance Handling Robot (UXOR) that can handle and defuse unexploded ordnance (UXOs) — bombs, motors and missiles — up to 1,000 kg remotely from one km Line Of Sight (LOS) is ready for technology transfer to private firms.

“Both the Indian Army and the Air Force are interested in the project. We have issued an expression of interest (EoI) already,” said DRDO Chairman Dr G Sateesh Reddy.

According to DRDO, the UXOR is based on an IC (internal combustion) engine and has a tracked Skid Steer Loader platform (like JCBs), good cross country mobility with six hours of endurance.

“It can defuse UXO with low order detonation. The Robot is equipped with an abrasive water jet cutting machine for case entry/through cut of UXOs. It is equipped with two manipulator arms, one for handling heavy bombs up to 1,000 kg and the other with the cutting nozzle,” DRDO said.

The agency added that the seven axis manipulator holds the nozzle through which the abrasive compound is used to cut through steel (up to 25mm thick) and render the UXO safe by removal of fuse for smaller ordnance or case cutting for large bombs.

The EoI has been issued by the Research & Development Establishment (Engineers), a premier lab under DRDO. “The EoI is expected from original manufacturers having sufficient experience, expertise and willingness to undertake production work. The firm should be technologically sound to manufacture and supply the system with requisite quality standards,” as per the DRDO.

One scientist explained that the problems with UXOs — explosive ordnance launched, placed, fired or released in such a way that it fails to explode as intended — is that over time, the detonator and main charge deteriorate, making them more sensitive to disturbance, and, thus, more dangerous to handle.

The DRDO added that the UXOR has multiple Degrees of Freedom (DOF) manipulator arm with a cutting mechanism to defuse the unexploded ordnance.