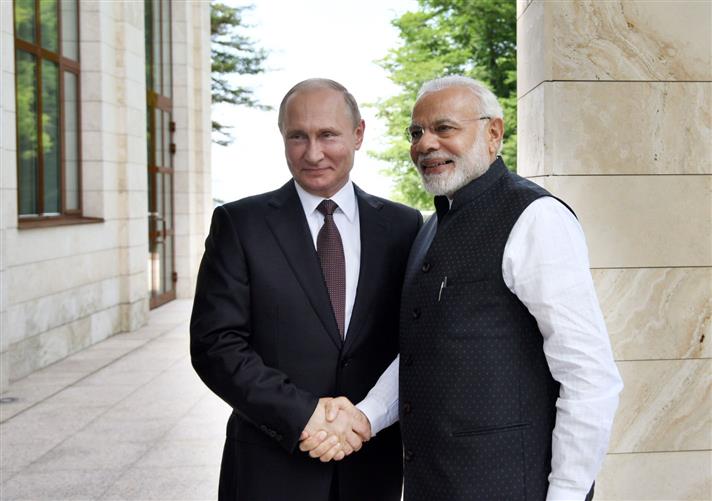 Sochi, Russia. The US “Countering America’s Adversaries Through Sanctions Act” (CAATSA) signed into law by President Donald Trump in August 2017 to punish the Kremlin was probably the main issue at the first ever informal summit between Prime Minister Narendra Modi and President Vladimir Putin in the Russian Black Sea Resort of Sochi May 21.

Though it was said to be an “agenda-less” summit allowing the two principals to discuss a whole range of crucial international and regional issues like Afghanistan, Syria and fresh US sanctions against Iran after trashing the nuclear deal with Tehran as the two leaders went into one-to-one talks, the Kremlin spokesman Dmitry Peskov confirmed that bilateral defence cooperation is to be discussed.

However, later briefing the Russian media Foreign Minister Sergei Lavrov, who cancelled his Cuba and Argentina visits to attend Sochi summit, said that the two leaders extensively discussed bilateral economic cooperation and disclosed that talks on free trade agreement (FTA) between India and Moscow-led Eurasian Economic Community (EURASEC) comprising of Russia, Armenia, Belarus, Kazakhstan and Kyrgyzstan are to commence in October, about the time Putin visits India for the annual summit.

It was not immediately clear what transpired at the summit on issue on countering CAATSA, which has not only jeopardised the USD 4.5 billion S-400 Triumf air defence system but also other major defence acquisitions from Moscow including four Talwar class stealth frigates, lease of second Akula class nuclear attack submarine, Kamov Ka-226 multirole choppers for the armed forces.

At the start of the talks assisted by their close aides including NSA Ajit Doval, Foreign Secretary Vijay Gokhale, Ambassador to Russia Pankaj Saran on the Indian side and Foreign Minister Sergei Lavrov on the Russian side, the two leaders limited themselves to a brief media interaction. Incidentally, Lavrov cancelled his Cuba and Argentina visit to be present at the Modi-Putin summit.

In his opening remarks, Prime Minister Modi said India and Russia have been friends for a long time and thanked President Putin for inviting him for the first-ever informal meeting at Sochi.

Narendra Modi recalled his first visit to Russia with then Prime Minister Atal Bihari Vajpayee in 2001 and said Putin was the first world leader whom he met after becoming the chief minister of Gujarat.

The Prime Minister also said Russia played a major role in helping India get a permanent membership in SCO. He added that India and Russia are working together on International North-South Transport Corridor (INSTC) passing through Iran.

President Putin, who was highly impressed by PM Modi’s digitalisation plans at their previous summit has also just now created a new ministry to look after the digitalisation in Russia.