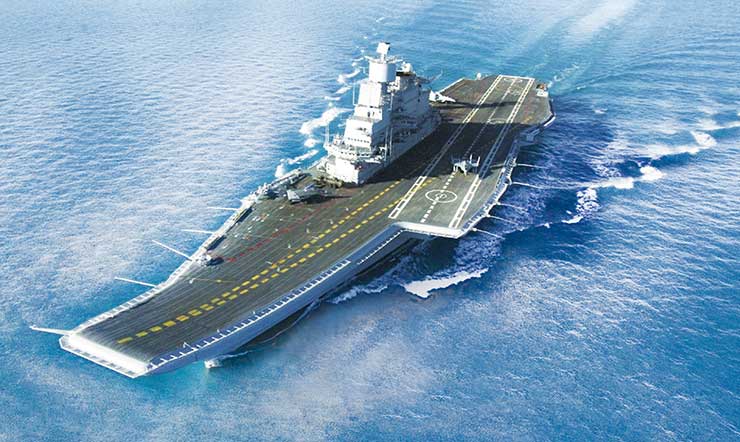 China’s Carrier Programme: China has been devoting considerable resources and attention to building up the strength of the PLA Navy (PLAN); with the aim of making it one of the most powerful maritime forces in the world. The PLAN is, very soon, likely to overtake the US Navy in numbers, and would lag only in some areas of capability.

In the steadfast pursuit of its overall aim of attaining maritime dominance, China has decided to create a force of three aircraft-carriers – one for each of its fleets. Like India, China first acquired an old Soviet-era aircraft-carrier but (unlike us), refurbished it at home and commissioned it as the ski-jump equipped Liaoning in 2012.

The Liaoning has been, quickly, followed by a bigger, indigenously designed and built ship, designated ‘Type 001A’. The new ship, launched in April 2017, is also fitted with a ski-jump and is likely to be commissioned in 2020.

A follow-on ship designated ‘Type 002’ is stated to be much bigger in size and will dispense with the ski-jump; using, instead the US Navy-style catapults. The switch to catapult mode will not only improve the sortie-rate and payload of aircraft but also permit heavier Airborne Early Warning aircraft to operate from the ship. In order to maintain three operational carriers, the PLAN will need to build at least 5-6 such ships; and it is possible that some of them may be nuclear-powered.

While the Chinese economy may well have the strength to fund such an ambitious programme, we need to take note of two other aspects of this Chinese strategy.

First, for years, China was doctrinally opposed to the aircraft-carrier concept; deriding these ships as ‘sitting ducks’ for its missiles and submarines, and evolving the special ‘anti-access, area denial’ (or A2/AD) doctrine to keep the US Navy carriers at bay. The very fact that the Chinese have reconciled their strong belief in A2/AD with a hugely expensive carrier-building programme signifies that an extensive doctrinal debate must have taken place within the Party and Central Military Commission before a pro-carrier consensus could evolve.

It is obvious that six years’ experience of operating the Liaoning has convinced Beijing that the availability of carrier-borne air power will free the PLAN from dependence on shore-based air-support and endow it with vital capabilities, including; fleet air-defence, anti-submarine warfare, anti-shipping, shore-strike and maritime domain awareness, in distant oceanic areas during war. In peacetime, PLAN carriers will not only serve to dissuade threats to China’s seaborne trade and world-wide diaspora, but also help guard sea-lanes associated with the ambitious Belt & Road Initiative, while offering huge capacities for humanitarian tasks. 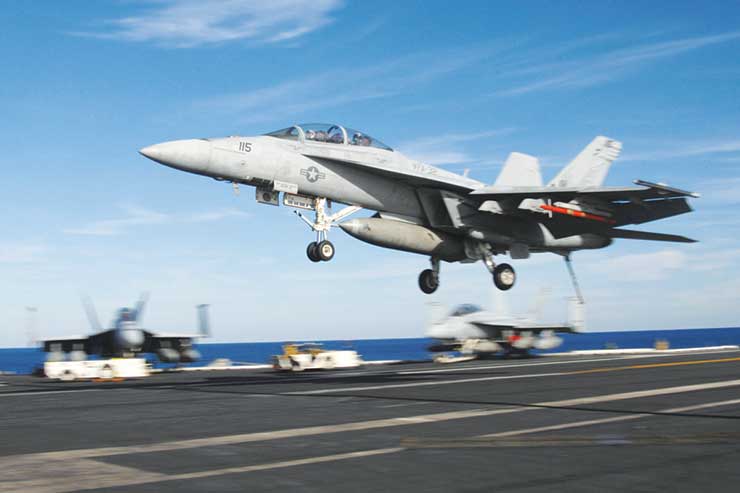 The second important point to note is that the Chinese felt compelled to equip their carriers with a home-grown fighter and devoted considerable resources and effort to develop one from scratch. China acquired a prototype Russian Sukhoi-33, in 2000, and reverse-engineered it to produce the Shenyang J-15 (Flying Shark), carrier-borne fighter. Introduced in 2013, the J-15 is reported to be a perfect copy of the Su-33, and has evoked sharp protests from Russia over violation of intellectual property rights.

One of the few key areas where China’s R&D has, so far, not succeeded, is development of an indigenous turbo-jet engine. As and when China succeeds in this endeavour, the J-15 will become a showpiece of its military-industrial complex.

Against the above background I will, now, move on to our own LCA-Navy programme. It is not widely known that the Indian Navy (IN) has not only remained a steadfast supporter of the LCA, but has also been the only agency, apart from DRDO, to make a financial commitment to the project. In the early 1990s, as the LCA programme was languishing, NHQ made enquiries about the possibility of a ship-borne version of the aircraft. On receiving a positive response, a naval version of the LCA was mooted and the LCA-Navy project, thus, came into being with a sum of Rs 4 crores being sanctioned by NHQ for a feasibility study.

This project was seen by the IN as a pioneering initiative, whose success would place India in a select list of just three countries which could produce carrier-borne aircraft. The Navy’s vision of LCA encompassed not only an acknowledgment of the talent and ingenuity of our aircraft designers and engineers, but was also meant to provide a badly-needed boost to our defence-technology base.

Here it must be pointed out that, cognizant of the possibility that this project may; (a) either not succeed or (b) fail to meet the timelines required for India’s first Indigenous Aircraft Carrier (IAC-1), NHQ recorded a conscious decision that in parallel with the LCA, it would identify an alternative aircraft for its new carriers. (As the LCA Navy programme kept slipping, this alternative turned out to be the MiG-29K; which was purchased along with Vikramaditya, but will also equip the IAC-1). 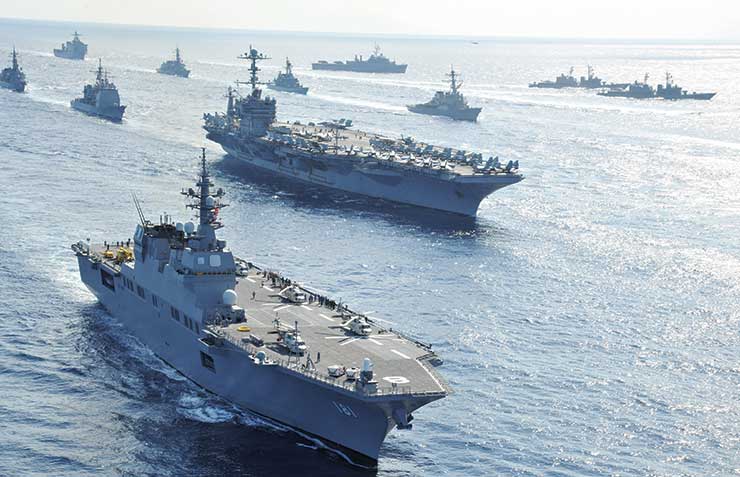 Going back to the 1990s, a closer examination of the LCA proposal revealed some major challenges, in converting a shore-based aircraft to fly from a ship. These included lack of engine thrust, a weak undercarriage, requirement of an arrester hook, and need for fuselage re-design, before the LCA could attempt carrier operations. Undaunted, the NHQ re-affirmed its faith in the programme by writing out QRs and initiating a Navy-DRDO funded engineering development programme in 2003 with the IN contributing over Rs 400 crores (as well as engineers and test pilots) to the project. In order to facilitate testing of the LCA Navy during ski-jump launches and ‘arrested’ landings, a ‘shore-based test facility’ (SBTF) has been created in Goa, which is just one of two such worldwide.

The prototype of LCA-Navy was rolled out in July 2010, and its first flight took place in April 2012. This was followed by simulated carrier launches from the Goa SBTF; by day, in December 2014 and by night in May 2016. However, the prototype has yet to carry out trials of the arrestor hook at the Goa facility. 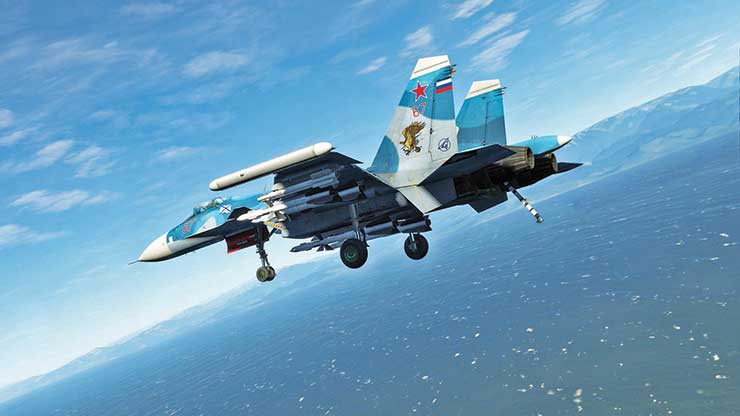 With the IAF having accepted the LCA into squadron service, and placing an order for 123 aircraft, the short-term future of the LCA appeared to be secure, regardless of which other machines the IAF acquires from other sources.

The LCA-Navy, on the other hand, appeared to have received a setback when, in December 2016, the IN “rejected” this aircraft for its current carriers; with the CNS reportedly saying, “We will continue to support DRDO, HAL and ADA, but the naval LCA in its present form unfortunately does not meet our qualitative requirements for carrier capability.” 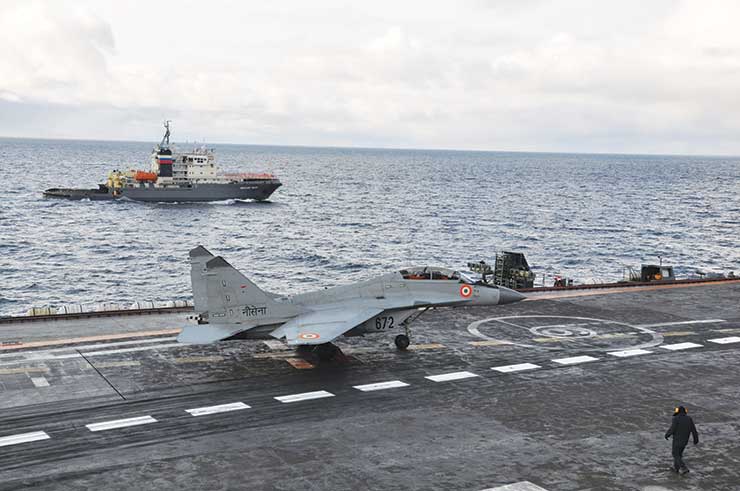 This peremptory rejection of the LCA-Navy by NHQ appears to have come as an unpleasant surprise to the agencies mentioned by the CNS. Their disappointment was compounded by the simultaneous issuance of a global RFI for procurement of 57 multirole fighters for its aircraft-carriers, by the navy. However, one can conjecture two valid and undeniable reasons for this, seeming ‘volte face’ by a Service, which has been a steadfast supporter of indigenization and the DRDO.

Firstly; by exercising a foreclosure option, the IN was, possibly, administering a rebuke to the DRDO for; (a) tardy progress in the LCA-Navy project (b) projecting unrealistic targets and timelines which they knew could not be met and (c) not seeking external help when they ran out of ideas. The second, and more compelling, reason could have arisen from the navy’s urgent need to formulate specifications of its second indigenous aircraft-carrier (IAC-2): given that the configuration, size and propulsion of a carrier has a direct linkage with the type of aircraft that will operate from it.

At this juncture, a brief digression is necessary, to dwell on the closely related issue of the navy’s aircraft-carrier programme(s).

If India decides to build the IAC-2, this ship will enter service at a juncture where a balance-of-power struggle is likely to be under way in the Indo-Pacific; with China and India as major players. PLAN ships and submarines are being seen, with increasing frequency, in the Indian Ocean, and it is only a matter of time before PLAN carrier task-forces, led by the Liaoning (and her successors) make an appearance to establish China’s maritime dominance in our waters. Since the Indian response to any attempted intimidation will need to be equally robust, the decisions relating to the design and capabilities of IAC-2 assume strategic dimensions. Essentially, there are three options for selection of an aircraft for the IAC-2.

Once the IN has selected an aircraft, the ship’s configuration (i.e. whether it will carry a ski-jump or catapult) and its operating and maintenance facilities can be designed around it; avoiding some of the pitfalls encountered on IAC-1. 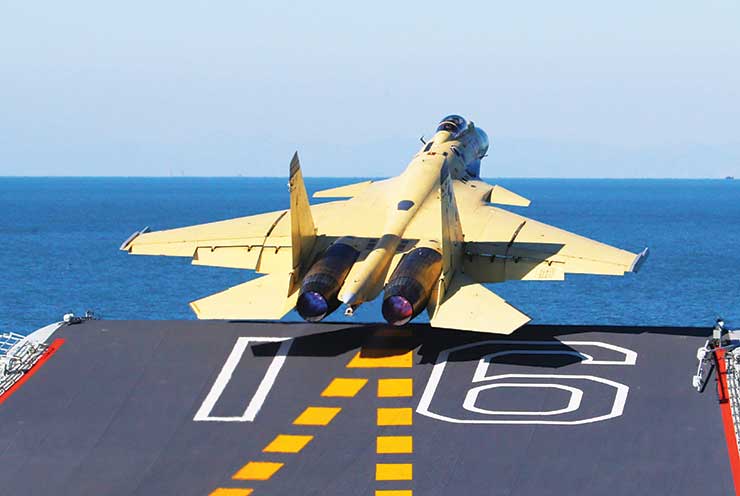 While some of the criticism levelled at the time and cost-overruns in the LCA programme and the tardy or flawed decision-making of our scientists, may be justified, we must acknowledge the huge technological achievement that this aircraft signifies for a country like India.

The sophisticated software for flight controls of this ‘unstable aircraft’, the weapon-aiming and air-data computers carried by it, and the carbon-fibre composite technology for its light-weight fuselage are the pride and joy of our scientists. Apart from this, the electro-hydraulic actuators for the controls, the pumps, motors, instruments and many of the major systems have all been developed by scientists working in dozens of DRDO laboratories and universities, and produced by MSMEs units across the country.

The beneficial fallout from the learning-process involved in evolution of the LCA and LCA-Navy has built up a strong aeronautical design, engineering, production and flight-testing capability in the country.

All this is equally true of India’s languishing Kaveri turbo-jet engine programme too which forms a vital component of India’s aeronautical aspirations. These two projects are the seeds of a promising aerospace industry, and have to be carefully nurtured by ensuring a long production-run for the LCA and its ‘evolved’ successors. The bottom-line is that if the LCA and the Kaveri engine projects do not succeed, India’s aeronautical industry faces a bleak future.

Returning to the LCA-Navy programme; reports indicate that consequent to the navy’s ‘rejection’ of this aircraft (for IAC-2), ADA and HAL have placed the project on the backburner, and further flight-testing has been stopped.

Such an approach seems to be very short-sighted because, currently, only 4 countries worldwide (USA, Russia, China & France), have the ability to design & build a carrier-borne aircraft. While the progress of the LCA-Navy, so far, constitutes a significant achievement for Indian designers, engineers and test-pilots, the programme must be taken to its logical conclusion to exploit the data and experience gained, and to justify the expense incurred.

This would require that the test programme should proceed to undertake trial landings on the Goa SBTF, to prove the hook and arrester wires, followed by actual ‘arrested landings’ on INS Vikramaditya. Once shipborne trials are completed successfully, the aircraft can be given a clearance for operations from Vikramaditya as well as IAC-1 alongside the MiG-29K.

Having abandoned the HF-24 Marut project prematurely, we must remember that technology does not remain static and no one can forecast the kind of developments that will take place in the next decade or two. Therefore, having come so far down the developmental path, the LCA project must not stop at 123 or even 250 aircraft, but, along with the enhanced Kaveri engine should form the core of all future fighter evolution in India.

Against this backdrop, the following suggestions need consideration during the time-frame, 2019-2030.

–The author is a retired Navy Chief

One thought on “Some Thoughts About India’s LCA Programme”