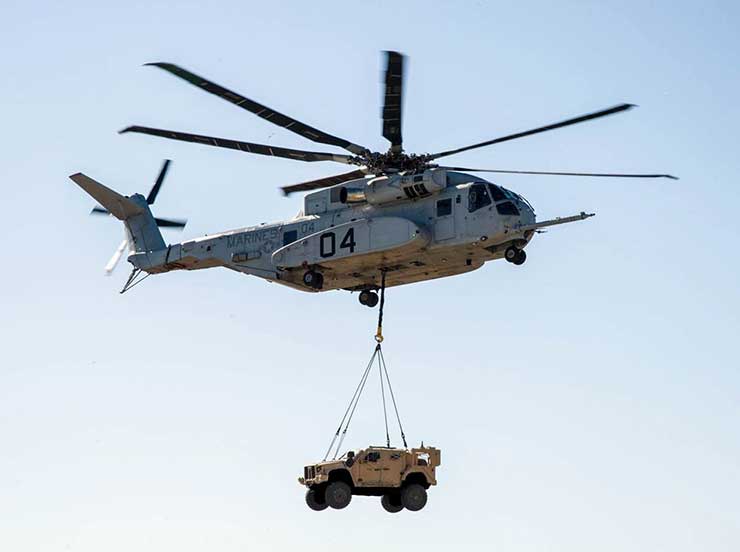 STRATFORD, Connecticut. Sikorsky, a Lockheed Martin company will build 12 production CH-53K King Stallion helicopters under a new $1.13 billion contract from the US Navy. These advanced helicopters are part of the 200 program of record aircraft for the US Marine Corps.

Under the terms of the contract, known as Low Rate Initial Production (LRIP) Lot 2 and 3, Sikorsky will begin deliveries of 12 CH-53K helicopters in 2022, and also provide spares and logistical support. Sikorsky remains committed to continuing to reduce costs over the life of the program. Read the Navy’s announcement.

The CH-53K is the only sea-based, long range, heavy-lift helicopter in production and will immediately provide three times the lift capability of its predecessor. The CH-53K will conduct expeditionary heavy-lift transport of armored vehicles, equipment, and personnel to support distributed operations deep inland from a sea-based center of operations. The new CH-53K will have heavy-lift capabilities that exceed all other DoD rotary wing-platforms and it is the only heavy lifter that will remain in production through 2032 and beyond. 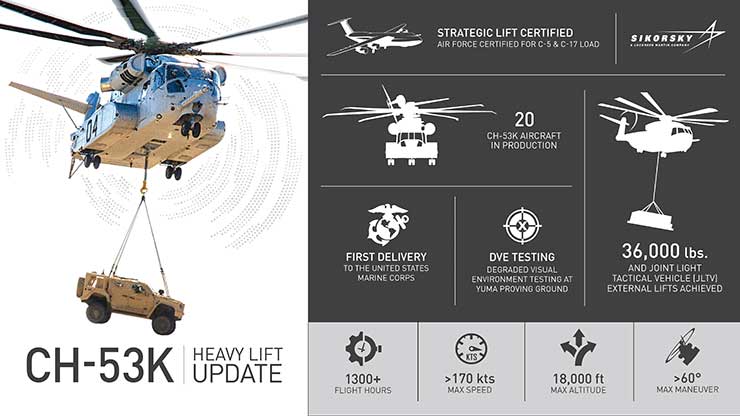 “Sikorsky employees and our nationwide supply chain are ready to ramp up CH-53K production to support deployment of this modern, safe and reliable aircraft in 2023-2024,” said Sikorsky Programme Director Bill Falk. “This contract demonstrates the US Marine Corps’ confidence in Sikorsky to expand production of this technologically advanced heavy lift helicopter.”

Lockheed Martin, Sikorsky, and its suppliers have made significant investments in facilities, machinery, tooling, and workforce training to ramp-up production required for the CH-53K programme. For example, we have installed more than eight new titanium machining centers, designed and implemented a new final assembly test facility with multi-floor ergonomic work platforms, installed 10-ton cranes, and now have 3D work instructions on the factory floor.

“We have transformed our factory for the future and implemented a model for all future helicopter programs,” Falk said. “Additionally, our engineers have implemented the latest technologies such as manufacturing simulation and 3D laser inspection technology. These investments in systems, personnel, and our facilities have elevated Sikorsky’s manufacturing technology and capabilities to meet production requirements of the CH-53K for domestic and international customers.” 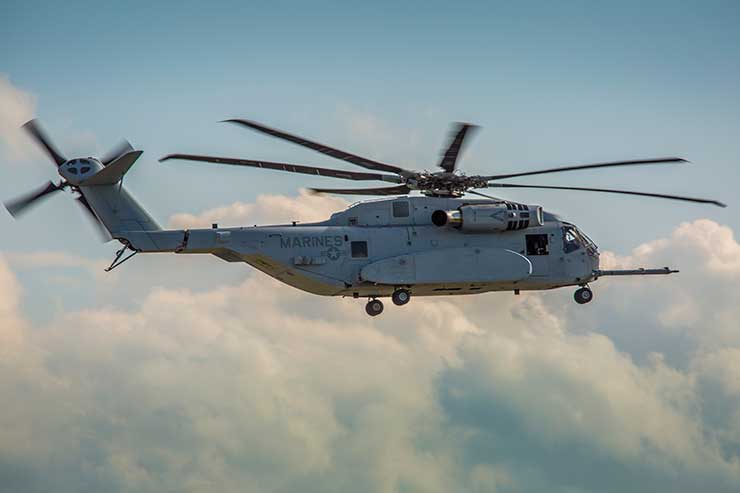 The all-new CH-53K, designed to be intelligent, reliable, low maintenance and survivable in the most difficult conditions, has flown more than 1,400 test hours and has met all the outer reaches of the test envelope. The King Stallion is in the midst of a rigorous test program to ensure militaries can safely move troops and equipment at higher altitudes, quicker and more effectively than ever.

The CH-53K, which has proven it can lift more than 36,000 pounds, is the most powerful heavy lift helicopter ever built in the United States. The King Stallion’s technologically advanced design will meet the future warfighting requirements for decades to come, enabling missions like humanitarian aid, troop and equipment transport, casualty evacuation (CASEVAC), support of special operations forces, and combat search and rescue (CSAR).