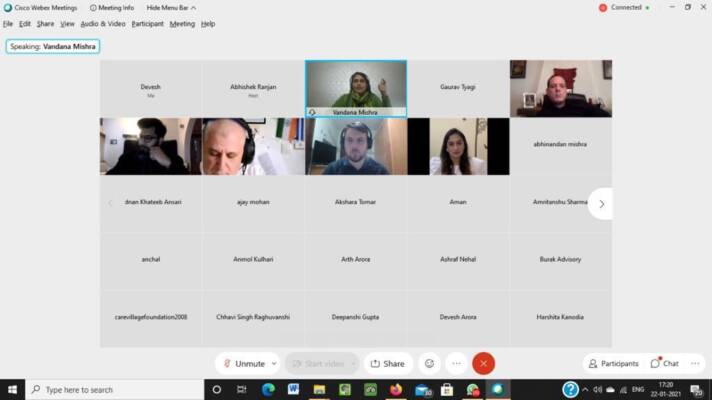 Athens. The recent report of Pakistan transferring nuclear missile technology to Turkey sent shockwaves around the globe. Concurrently, it exposed the nexus between Ankara and Islamabad, which in turn has far-reaching ramifications for regional stability and security. The growing threat of terrorism as a result of this nexus is of serious concern to India and Greece. As a result of this, both nations have been looking towards deepening their strategic partnership as a way to counter Turkey and Pakistan’s sinister designs in the region.

The Founder of Red Lantern Analytica, Abhishek Ranjan, opened the webinar by introducing the topic and the moderator of the webinar Dr Tyagi. Dr Tyagi opened the discussion by stressing the need to discuss the issue at hand, given its propensity to harm regional security.

First speaker of the discussion Mr Mountzouroulias while making his opening remarks called for an Indo-Greek alliance in the wake of Pakistan supplying nuclear missile technology to Turkey. He argued that to counter this alliance, India and Greece should consider joint production of weapons.

While pointing out the dynamics of this nexus, Mr Mountzouroulias highlighted Ankara’s support for Pakistani terrorism in Jammu and Kashmir; Turkey’s interference in Greece; and Turkey’s actions to lure Indian students into terrorism via scholarships and NGOs. In conclusion of his remarks he urged India and Greece to formulate a new dogma of cooperation that could counter the Turkish President’s Caliphate dreams, which pose a threat to the entire world.

Dr Mishra referred to the recent beheading of a teacher in Paris as the watershed moment that expanded the divide between Turkey and France. By mentioning this incident, she highlighted the Turkey-Pakistan-China nexus that has led to Ankara going against European Union and the United States.

Dr Mishra pointed out that despite both Turkey and Pakistan being Islamic nations, neither of them have stood up to China for their ethnic cleansing of Uyghurs. She went on to underline the room available for an Indo-Greek alliance based on cultural exchanges of varied kinds and stated that such an alliance can become the foundation for a deeper strategic partnership because it is “a partnership of principles.”

Emmanouil Fragkos started by underscoring the religious intolerance against minorities at the behest of Turkey and Pakistan. By referring to various such incidents of religion-based violence, Mr Fragkos accentuated Turkey’s disputes with countries like Greece, Cyprus, Armenia, and Syria. Calling Turkey and Pakistan fanatic regimes, he argued that such countries should not possess nuclear weapons as they pose a threat to world peace. In this regard, Mr Fragkos highlighted his own efforts to create a lobby against Turkey’s nuclear ambitions.

He stated that Erdogan’s Caliphate Dreams won’t materialise because of three reasons- Turkey having reached its maximum; loss of allies in the Arab world; and the possibility of Kurds being in majority by 2050. Turkey is investing in the radicalisation of Indian Muslims for the benefit of Pakistan, which should ring alarm bells, he observed.

Professor John Nomikos in his remarks underpinned that the Turkey-Pakistan nexus is an immediate terrorist threat to both India and Greece. He stated that Turkish, Pakistani, and Chinese intelligence are working together to destabilise Jammu and Kashmir as well as Greece.

As the Biden administration takes over, Professor Nomikos called for an enhanced role for the European community and the United States to stop Turkey’s nuclear dreams. While highlighting various platforms of bilateral cooperation between India and Greece, he asserted that “India must be there in the Mediterranean” to counter this nexus.

Sonam Mahajan opined that while she’s not surprised by the growing Turkey-Pakistan nexus, the leaders of both nations are possessed with a diseased idea of expansionism. With Turkey undertaking drilling and hydrocarbon projects in the Mediterranean, India and Greece should take on a more enhanced approach along with the European Union, she said.

Dr Mahajan argued that both Turkey and Pakistan are using religion as a means to fuel terrorism in India and that it offers India an opportunity to ally with Turkey’s foes. She closed her remarks by stating that she’s hopeful of the Indian government’s actions to tame Turkey and Pakistan through deeper cooperation with regional partners.

The remarks were followed by Dr Tyagi undertaking a Q&A Session, in which questions on various dimensions of the topic were posed by the audience to the panelists. The questions included, but were not limited to, sources of financing for Turkey and Pakistan; China’s role in the Turkey-Pakistan nexus; the role of forums like QUAD, FATF, etc. in countering the nexus; the role of Indian diaspora in Greece and the United States to create stronger bilateral ties; and possible alliances for both India and Greece.

The webinar closed with a vote of thanks delivered by Paul Antonopoulos (Bureau Chief, Greek City Times). While thanking all the panelists for their thought-provoking remarks, Mr Antonopoulos reiterated 2300 years long Indo-Greek legacy which has stood the test of time, and this webinar is a testament of the same.

He suggested that deeper relations in the fields of education, technology, and most importantly security is the need of the hour in wake of Erdogan’s Ottoman Dreams. Declaring the recent agreement of Turkey, Pakistan and Azerbaijan as a collective threat, Mr Antonopoulos propounded the inclusion of Cypriots and Armenians in organiser’s future discussions to strengthen regional security architecture.