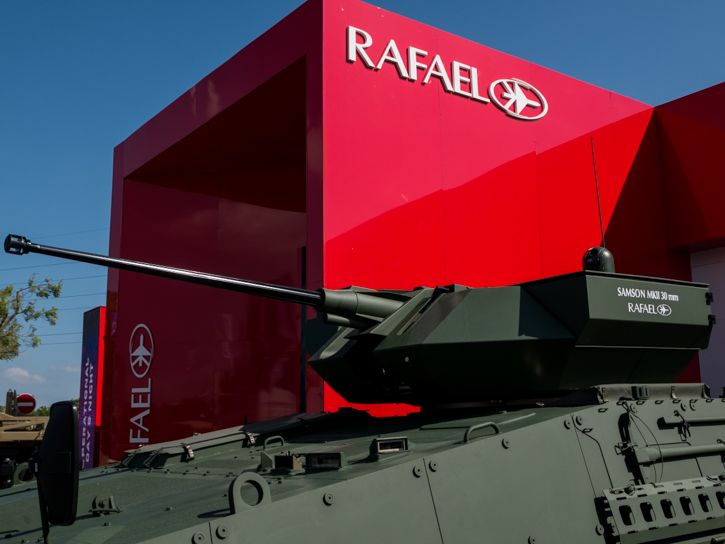 At EUROSATORY 2018, Rafael will be unveiling a number of NEW systems and capabilities in the areas of ground precision attack, land operations fire management, electro-optical loitering munition for light, tactical dismounted forces and active protection for 8*8 vehicles:

FIRE WEAVER – A Revolutionary Networked Attack System for Digitization of Land-Based Operations, enabling simultaneous, precision strikes on
multiple targets within seconds. Fire Weaver is designed to serve as a distributive tactical system that connects all the sensors and shooters in the battlefield on a single network, and to manage the attack process, including targeting and fire selection.

TROPHY APS for 8*8 vehicles – the world’s only combat-proven active protection system for armored vehicles, Rafael’s TROPHY for 8*8 vehicles is the only mature, available APS that has undergone successful operational integration on combat vehicles such as the LAVIII IFV and has been tested on the Stryker APC. This TROPHY variant can also be integrated with Rafael’s SAMSON Mk II Remote Weapon Station.

FIREFLY –a new variant of the SPIKE missile family, FIREFLY is a miniature electro-optical loitering munition for light, tactical dismounted forces such as Infantry, Marines or Special Forces. FIREFLY was designed for urban arena warfare, where situational awareness is limited, the enemy is behind cover, and precision is critical. The impact of FIREFLY on the Infantry is revolutionary, fundamentally changing small Infantry tactics.

In addition, Rafael will exhibit the following systems:

Drone Detection and Neutralization System:
DRONE DOME – The Drone Dome System is an innovative end-to-end system designed to provide effective airspace defense against hostile drones. Drone Dome has 360° circular coverage and is designed to detect, track, and neutralize drones either by jamming their communication or destroying them using a laser beam.