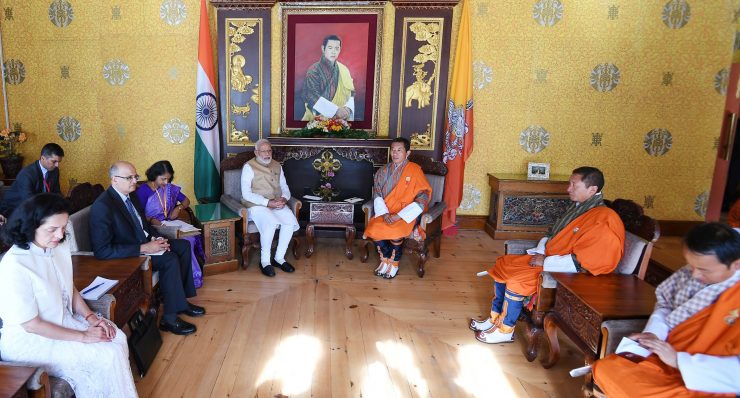 Prime Minister Narendra Modi’s two-day visit to the Kingdom of Bhutan from August 17-18 has diversified the India-Bhutan relationship. Both nations agreed in principle to cooperate in the field of space, education, health and most importantly in the sector of hydel power. PM Modi inaugurated the 720 megawatts (MW) Mangdechhu hydropower project under “neighborhood first” policy.

By choosing Bhutan as one of the first foreign destinations, PM Modi placed a significant importance to regional co-operation before global cooperation. Bhutan’s strategic location is the primary reason behind PM Modi’s visit to the Himalayan Kingdom. On the other hand, China’s growing interest in establishing an embassy in Bhutan shows China seeking more effectively to harness its capabilities in the region. However, it goes to the credit of Modi government that India strengthens the strong diplomatic ties with Bhutan.

India-Bhutan diplomatic relations were first established in 1968 with the establishment of a special office of India in Thimpu and 2018 marked 50 years of diplomatic relationship and friendship between both the nations. The ties between the two countries had become warmer, even before this, when Bhutan firstly recognised India’s Independence in 1947. The bilateral relations between the two states were the result of the ‘Treaty of Friendship and Cooperation’ which was signed in 1949. ‘Article 2’ was the most important provision of the Treaty of 1949 which declared that Bhutan’s foreign relations will be performed under the influence of India and the internal affairs will be processed without any interference of India. ‘Article 2’ of the 1949 Treaty was revised in 2007 which forever changed the terms of erstwhile India-Bhutan relations by renegotiating the Treaty to give greater autonomy for foreign policy and military purchase to Bhutan. India and Bhutan celebrated the Golden Jubilee of the establishment of formal diplomatic relations in 2018. Bhutan opened a Consulate in India’s north-eastern city of Guwahati marking the completion of India-Bhutan 50-year relationship. Following the path of regional cooperation, Prime Minister Modi’s first foreign visit to Bhutan, soon after the taking over the reign for the second time, was to strengthen the strategic and political relationship while joining hands to further new hydropower projects. 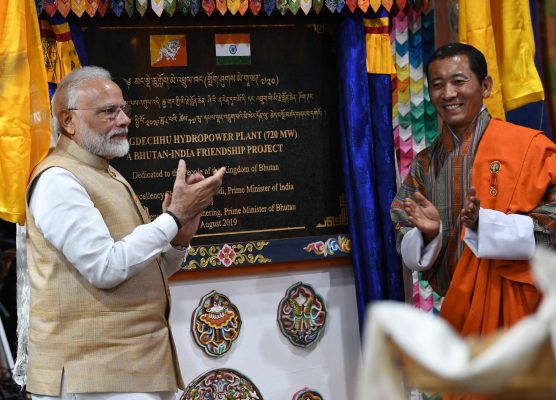 India and Bhutan’s relationship on economic terms have always been wide. India is the single largest trading partner of Bhutan. In 2016 a new trade agreement between the two nations was signed. This agreement aimed to reduce bureaucratic documentation to ease the trade and commerce of both the countries. Many hydropower projects in Bhutan have been assisted by India and India imports 1540 MW of hydropower from Bhutan. Regarding the hydro-electric cooperation, it is known that the major rivers in Bhutan have an estimated potential of 30,000 MW of hydropower which provides the scope for enhancing the relationship between the two nations on a broader scale. Knowing this potential, India pledged to assist Bhutan in developing at least 10,000 MW of hydropower under the protocol of 2006 agreement and surplus electricity will be imported to India by 2020 working on the same agreement. India and Bhutan mutually decided to sign a ‘new’ bilateral agreement on Trade, Commerce and Transit with effect from July 29, 2017.

The 64th Republic Day in 2013 was celebrated in the presence of Bhutanese king Jigme Khesar Namgyel Wangchuck as the Chief Guest of the function. Her Majesty the Queen Jetsun Pema also paid an official visit to India from January 6-10, 2014. And in the same year, Prime Minister Narendra Modi also paid a visit to Bhutan from June 15-16, and subsequently the then President Pranab Mukherjee also paid a state visit to Bhutan from November 7-8, the same year. In 2017, the King of Bhutan accompanied by Bhutanese queen and the Royal Prince Jigme Namgyel visited India and held a discussion on issues of bilateral interest. Bhutan was the first overseas trip for newly appointed External Affairs Minister S Jaishankar in June 2019. PM Modi made a State visit to the Kingdom of Bhutan from August 17-18. The continuous progression of the high-level visits between the two nations clearly indicates the type of relationship shared by the two regional neighbours. These continuous progressions make space for a broader and deeper relationship between the two nations. 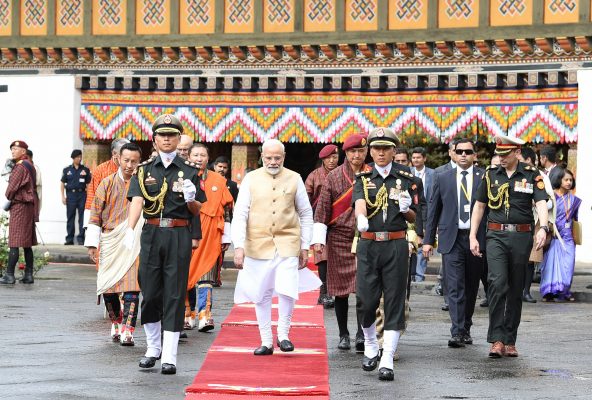 One of the key agenda of PM Modi’s visit to Bhutan is inaugurating the 720 MW Mangdechu hydel power project. Prime Minister Narendra Modi is continuing his focus on the “Neighborhood First” Policy. His main agenda is to diversify India’s partnership with Bhutan from hydropower sector to enhanced trade and linkages in space and education. India provided approx Rs 5,000 crore for Bhutan’s 12th five-year plan that began in 2018. PM Modi and PM Tshering jointly inaugurated the Ground Earth Station and SATCOM network. The two leaders also unveiled an e-plaque on the interconnection between India’s National Knowledge Network and Bhutan’s Druk Research and Education Network. PM Narendra Modi clearly understands the need of regional cooperation between the two nations because of the China factor. Hence in 2014, the Prime Minister chose Bhutan as his first foreign destination placing regional co-operation before global co-operation and again in 2019 he has given it utmost importance. As a result, the two countries signed 10 MoUs in the fields of space research, aviation, IT, power and education. An additional $100 million will be made available to Bhutan under a standby swap arrangement to meet the foreign exchange requirement.

India looks for a closer political and strategic relationship with Bhutan because of the growing Chinese influence in the region. The PM’s visits assume further significance in the backdrop of efforts by Beijing to woo Thimpu. Doklam valley is the tri-junction between Bhutan, India, and China. The troops from India and China were locked in a 73-day-long standoff in Doklam on June 16, 2017 and the face-off ended on August 28 the same year. Bhutan and China have a dispute over Doklam and India has been helping Bhutan against China. A joint statement issued from India and Bhutan after the return of PM Modi from the Himalayan Kingdom says that “both the sides reaffirmed their shared security interests and maintain close co-ordination on matters each other’s security and national interests.”

Bhutan is also part of two important regional and sub-regional cooperations like Bay of Bengal Initiative for Multi-Sectoral Technical and Economic Cooperation (BIMSTEC) and Bangladesh-Bhutan-India-Nepal (BBIN) in which Modi government can play important strategic encirclement against China’s growing geo-economic and geo-political interventions in India’s neighborhood. The importance of the South Asian Association for Regional Cooperation (SAARC) is defunct due to ‘Pakistan problem’. Therefore, BIMSTEC and BBIN can help secure India’s strategic space in the South Asian region. Bhutan and China do not have formal diplomatic relations and China willing to open its embassy in Bhutan. Almost two dozen talks have been held since 1984 between China and Bhutan to solve the border dispute. However, no border negotiation between China and Bhutan can create a problem for India’s security interests. India and Bhutan were the only two nations which opted out of China’s One Belt and One Road (OBOR) plan and both nations skipped the 2017 and 2019 Belt and Road Initiative (BRI) Forum at Beijing.

India needs to expand the basket of engagement with Bhutan. India is reaching out to the parliamentarians & students of Bhutan & encouraging them for strong ties. India helping the Himalayan kingdom in various sectors likes broadcasting, telemedicine, disasters. India also set up institutions as well as collaboration with the premier institute of India, IIT, IIM and increasing people to people interaction.

PM Modi’s second time visit to Bhutan shows that India’s relations with the Himalayan kingdom will continue to receive the highest level of strategic attention of the Indian government. Modi’s plan to visit Bhutan provides a glimpse of New Delhi’s reorientation of “neighborhood first” policy and match to China’s One Belt and One Road (OBOR) policy which is set to change strategic equations across the Asian continent. PM Modi’s visit is the inclusive gestures from New Delhi key to keeping Himalayan kingdom away from Chinese embrace.