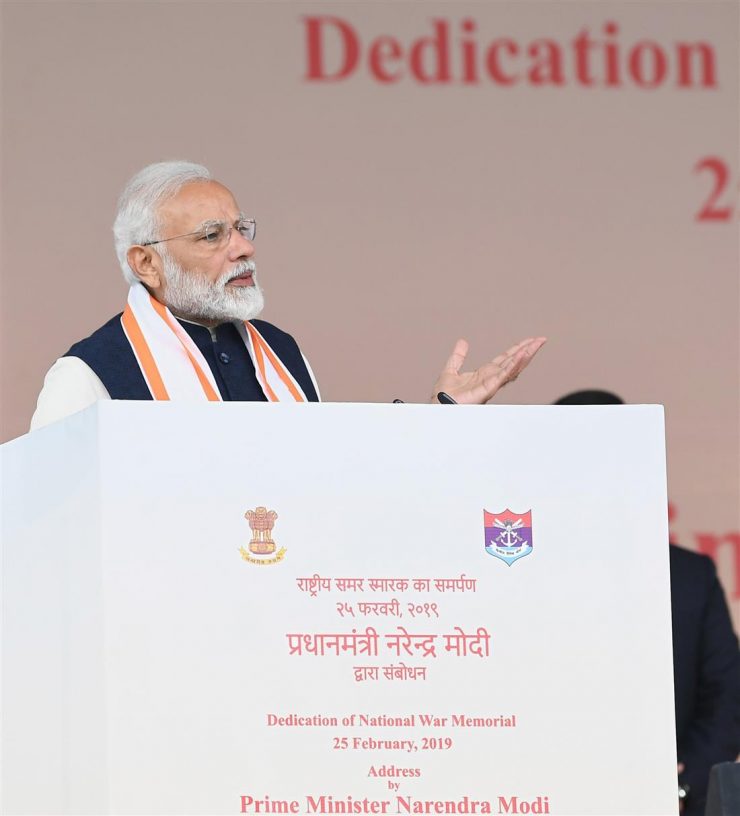 NEW DELHI. Prime Minister Narendra Modi on February 25 lit the eternal flame to mark the dedication of the National War Memorial in New Delhi to the nation.

He visited the various sections of the Memorial.

Earlier, addressing a large rally of Ex-Servicemen, the Prime Minister said that it is the result of the valour and dedication of lakhs of soldiers that the Indian Army is today considered among the strongest in the world.

The Prime Minister said that the soldiers have been the first line of defence, both against enemies, and against natural disasters.

The Prime Minister recalled the CRPF jawans who sacrificed their lives in the recent terror attack in Pulwama, and paid homage to all the martyrs who made the supreme sacrifice, defending India.

He said that today New India is growing in stature globally, and this is due in large measure to its Armed Forces. He expressed happiness that the National War Memorial, or Rashtriya Samar Smaarak, is being dedicated on February 25.

Prime Minister Modi recalled that the Union Government had also fulfilled its pledge of providing One Rank, One Pension to the soldiers and ex-servicemen. He said OROP has resulted in an increase in pension of upto 40 per cent, and an increase in salaries of soldiers of upto 55 per cent, compared to 2014.

Giving some more illustrations of the Government’s approach towards the Armed Forces, PM Modi mentioned the encouragement being given to innovations by soldiers during Army Day, Navy Day and Air Force Day events. He also mentioned the Gallantry Awards Portal launched on 15 August, 2017.

The PM said women have now got the opportunity to become fighter pilots. He said that women officers in short service commission are being given opportunities for permanent commission at par with their male counterparts. 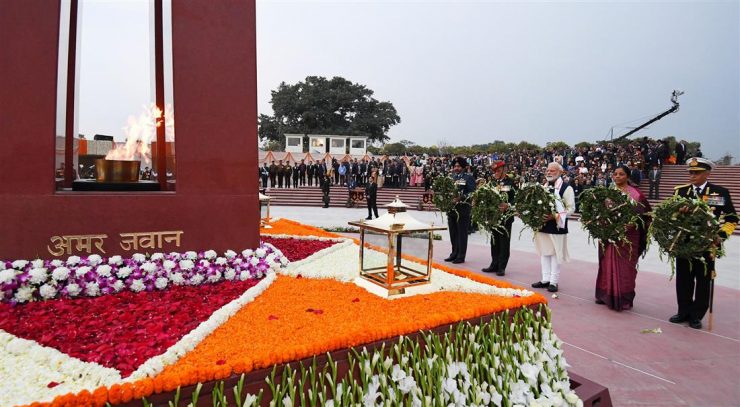 The Prime Minister said that change has been initiated in the entire ecosystem of defence procurement. He said transparency and level playing field are the hallmarks of the Government’s approach. He stressed on the encouragement being given to “Make in India.”

The Prime Minister said that the Indian Army has participated in about 50 out of 70 major UN peacekeeping missions, and about 2 lakh soldiers have been a part of these operations.

He said the navies of 50 countries were part of the International Fleet Review organized by the Indian Navy in 2016. He also said that our Armed Forces conduct an average of ten big joint exercises with Armed Forces of friendly countries, every year.

He said that the huge reduction in piracy in the Indian Ocean, is due, to a large extent, to the military might of India, and our international partnerships. The Prime Minister referred to the long-pending demand from the Indian Army for 1.86 lakh bullet-proof jackets, and said the Union Government has procured over 2.30 lakh bullet-proof jackets over the last four and a half years.

He said the Union Government is equipping the Indian Army with modern aircraft, helicopters, submarines, ships and weaponry. He said decisions pending for a long time, are being taken in national interest.

The Prime Minister said that besides the National War Memorial, the National Police Memorial has also been established. The Union Government has recognised great national leaders including Sardar Patel, Babasahed Ambedkar, and Netaji Subhas Chandra Bose, he added.