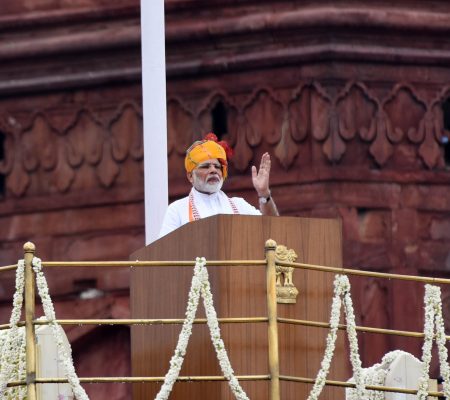 New Delhi: In a strong signal to neighbours and a move towards strengthening the defence forces, Prime Minister Narendra Modi in his Independence Day address to the nation announced that India will soon have a Chief of Defence Staff (CDS) as head of the Tri-services.

Speaking from the ramparts of the historic Red Fort on the 73rd Independence Day, he said the CDS will ensure synergy among the three services and provide effective leadership to them.

“Our government has decided to have a Chief of Defence Staff- CDS,” Modi said.

The creation of a CDS post had been a major recommendation of the Kargil Review Committee — of integration of the three services — Army, Navy and Air Force, but it had remained only on paper with no concrete action.

The government appointed Lt Gen DB Shekatkar (Retd) as head of an 11-member committee to recommend measures to enhance the combat capability of the armed forces and re-balance defence expenditure.

The Committee of Experts (CoE) had made 99 recommendations to enhance combat capability and rebalance defence expenditure of the armed forces including the appointment of a Chief of Defence Staff and submitted its report in December 2016.

The need for a CDS was a long felt one since it was considered as a key to higher defence reform by Defence experts and the idea was originally aimed at providing a single point of reference for the government on all matters of national security. The CDS was to be a five star rank general – a rank above the chiefs of the army, navy and air force.

Meanwhile, there is speculation is that the current army chief General Bipin Rawat, could be named to the post.

Modi said the armed forces were the pride of every Indian. To keep up with the changing times and emerging security threats, however, there was a need for the forces to ensure better coordination among the three wings of the armed forces, he said.

“Reform is also necessary. Defence reform has been in the works for a long time now and reports have been tabled several times. The rules of war are changing and India can’t think in a bubble. Our forces need to move together and can’t be falling behind. Coordination should be in tandem with the other. I have decided that Chief of Defence Staff will be created. And all three forces will have one chief and this will help unite the forces,” Modi said.

That the Modi-led National Democratic Alliance government was moving in the direction of creating the post of CDS was clear when the prime minister himself referred to the need for better synergy and cooperation among the three armed forces on July 26 at an event to mark 20 years of the Kargil war with Pakistan in 1999. More recently, defence minister Rajnath Singh, too, had spoken of this.

The proposal to set up the office of chief of defence staff was first made several decades ago. When a high-level committee set up to examine the gaps in the country’s security system in the wake of the Kargil War in 1999 submitted its report, this was one of the many recommendations it had made. A group of ministers analysing required reforms in the national security system some time later had also favoured appointing a chief of defence staff. But a decision on the matter was left pending in the wake of opposition from within the three services.

In 2012, a task force headed by former cabinet secretary Naresh Chandra had recommended creating the post of a permanent chairman of the Chiefs of Staff Committee. This was envisaged as a post of a four star general – a position equivalent to the three service chiefs. It was seen as a compromise given the resistance to the creation of the post of CDS. At present however, there is no permanent CoSC — the senior-most chief amongst the three services dons the mantle of chairman of the Chiefs of Staff Committee and it is post held in rotation by the three chiefs.