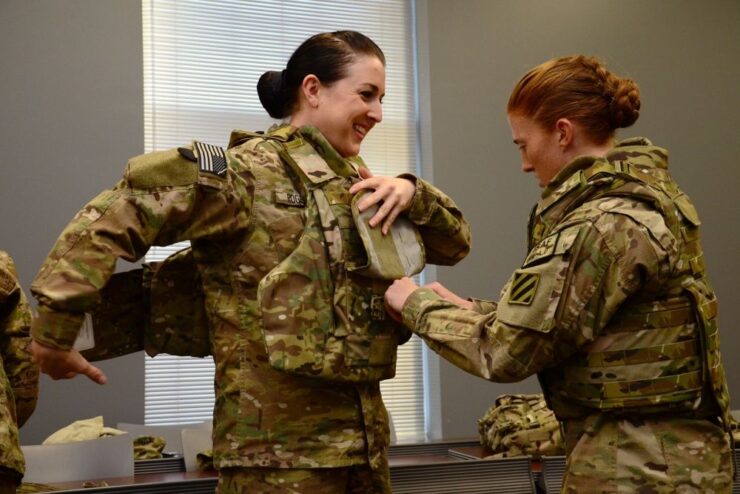 Washington: The US Army is fielding a new body armor system, including the Modular Scalable Vest (MSV) and other items in the system which have purpose-built design features for female body types.

When Maj. Melissa Elledge was a brand-new soldier ploughing through basic training, she had to find gear shortcuts simply to accomplish basic tasks, such as firing her weapon.

“I spent the whole 10 weeks of basic training with a bruise in my bicep because that’s where I put the butt stock,” Elledge said. “I either had to pull away the body armor to fix my weapon, or what was easier, use my bicep.”

That was back in 2007, when she joined the Army at 5 feet 3 inches tall and weighing less than 120 pounds. But little changed for her and many either female or smaller stature male soldiers until now. A limited number of sizes for body armor and other gear meant soldiers that didn’t fit those standard models were basically out of luck when it came to finding a good fit.

“You just drove on, this is what they gave you, you wore that and you figured out how to make it work for you so you could shoot, perform and meet your mission,” Elledge said. After a four-year stint as an Army congressional liaison, Elledge now serves as the assistant program manager for body armor for soldier protective equipment at Program Executive Office-Soldier.

The Army’s Modular Scalable Vest, the replacement for the current Improved Outer Tactical Vest, has already been issued to all but one of the Army’s six Security Force Assistance Brigades and some select deploying units, Lt. Col. Stephen Miller, product manager for Soldier Protective Equipment said.

Later this summer, the MSV and its accompanying parts, such as the Female Ballistic Combat Shirt and Blast Pelvic Protector, are headed to close combat soldiers within the 82nd Airborne Division. Those paratroopers are being prioritized due to their Global Response Force mission.

Some of the female features include better side chest protection in the FBCS for female soldiers with a larger bust size. Other features include a notch cut in the collar to accommodate longer hair, which is often tied in a bun.

The larger complement of gear, part of the Soldier Protective System, also includes a female-specific designed ballistic combat shirt. That shirt has a flare cut at the bottom to accommodate the different shape of the female hip. The design helps prevent it from riding up and exposing vulnerable areas of the torso.

The shirt replaces the Army Combat Shirt and offers protection for the upper arms and shoulders. It comes in five sizes: extra small, small, medium, large and extra-large.

Miller points out that some of the additional sizes in both the vest and shirt help soldiers of either gender mix and match their gear.