Admiral Karambir Singh is the Chief of Naval Staff (CNS). Commissioned into Executive Branch of the Indian Navy on July 1, 1980, he has served in a variety of Command, Staff and Instructional appointments. Prior to taking over as CNS, he was Deputy Chief of Naval Staff (DCNS) and Vice Chief of the Naval Staff (VCNS). Admiral Karambir Singh is a graduate of the Defence Services Staff College (DSSC), Wellington, and is a recipient of President’s awards of Param Vishisht Seva Medal (PVSM) and Ati Vishisht Seva Medal (AVSM).

RA: In recent times, role of Indian Navy has expanded and it has leveraged the strategic positioning of India as an emerging global power. As a blue-water Navy, what future capabilities (collective military competency and combat potential) are required and how has been the progress so far in this context?

CNS: Indian Navy (IN) is being modernised to create capabilities for accomplishing a range of missions across the entire spectrum of future threats and challenges. Towards this, present force levels are being augmented/ modernised according to a laid down plan and being undertaken in an incremental manner.

Modernisation of the Navy is being driven by undiluted focus on Combat Readiness, with ‘Ordnance on Target’ as an important measure of combat effectiveness; and acquisition of mission-capable platforms that are fully combat capable.

Modernisation plans include induction of aircraft carriers, ships, nuclear-powered submarines, conventional submarines, and induction of certain state-of-the-art weapons, sensors and equipment. Further, development of technical and support infrastructure for maintenance of these new inductions is also being progressed.

The maritime domain of the Indian Ocean Region (IOR) necessitates a strong and robust Indian Navy as a regional maritime power to meet future challenges. The role and responsibility of the Indian Navy is increasing rapidly, to protect our maritime interests along with the requirement to safeguard our expanding economic interests, as also the responsibilities associated with being a mature and responsible regional maritime power

Presently 43 ships and submarines are under construction, out of which 41 are being built in Indian shipyards. The first indigenous aircraft carrier is under construction at M/s CSL, Kochi, with likely delivery in second half of 2021. Four destroyers of Project 15B are being constructed at M/s MDL and delivery is likely to commence from 2021. Seven frigates of Project 17A Class are under construction at MDL and GRSE and their delivery will commence from 2022 onwards. Further, contracts for two Diving Support Vessels, four Survey Vessels (Large) and four Project 1135.6 Follow on ships have been concluded in 2018. Contract for 16 ASW Shallow Water Craft has been concluded in 2019.

Similarly, IN is focusing on induction of long range sensors and weapons with precision strike capability for its platforms. Our preferred mode of induction is through the indigenous route, as far as feasible.

Going forward, the Indian Navy is seeking to harness niche technologies towards effective use of resources. Networking, unmanned solutions, autonomous vehicles and new age weapons and sensors would be part of our capability in the near future. We have also embarked on a focused drive to integrate Artificial Intelligence and Big Data Analytics into our scheme of things. Integration of these systems from different Original Equipment Manufacturer (OEM), with the shipboard equipment would be challenging and, therefore, capability to integrate varied technologies and systems is also being paid undivided attention. 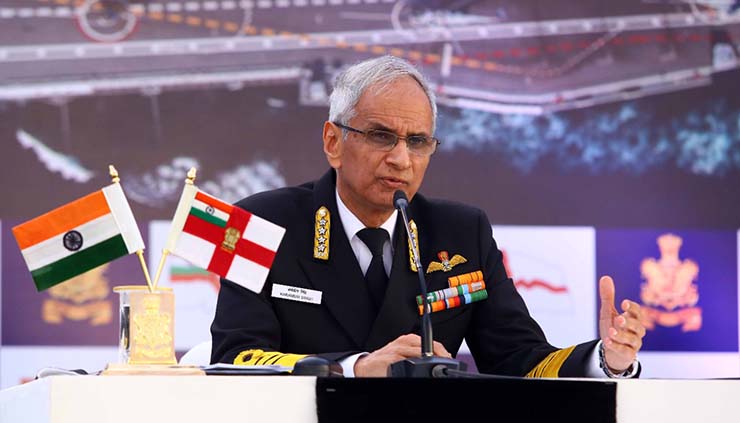 CNS: The maritime domain of the Indian Ocean Region (IOR) necessitates a strong and robust Indian Navy as a regional maritime power to meet future challenges. The role and responsibility of the Indian Navy is increasing rapidly, to protect our maritime interests along with the requirement to safeguard our expanding economic interests, as also the responsibilities associated with being a mature and responsible regional maritime power. Concurrent availability of two CBGs is one of the prime requirements to fulfill that role and, therefore, IN would need a force level of three Aircraft Carriers. IN’s Long Term Capability Plan also envisages induction of three Aircraft Carriers, so that two CBGs are available for dispersed deployments in the IOR at all times.

The third aircraft carrier of the IN, to be built indigenously, has been conceptualised and broad parameters/ characteristics of the ship (IAC 2) have been drawn up. The ship is envisaged to be more capable than the existing aircraft carriers in the IN. The case for the third Aircraft Carrier is being progressed at multiple levels/ stages, and IN will approach the requisite authorities for Acceptance of Necessity for the same in the near future.

RFI for propulsion design and design feasibility was issued on August 31, 2020 and response has been received from nine firms.

RA: Navy probably has the largest number of weapons platform made indigenously and the government’s move to boost indigenous manufacturing through the Strategic Partnership (SP) Model started with NUH. Do you think SP Model will be a game changer in achieving self-reliance goal?

CNS: The Strategic Partnership Model was conceptualised as a partnership with the Private Industry to provide capacity over and above that of the DPSUs/ OFB. It aims at absorption of niche and critical technologies by Indian Private Firms through partnership with foreign OEMs, thereby enabling Indian Private Industry to indigenously manufacture high end defence platforms. The NUH case being progressed through the SP Model is a game changer, as it lays the foundation of achieving self-reliance through transfer of niche technologies, setting up of Maintenance, Repair and Overhaul (MRO) organisation, Manufacturing Hub in India for export, setting up alternate R&D hub for helicopter manufacturing, skill development of MSMEs and job creation. This Model has the potential to contribute immensely in achieving both Self-reliance and economic growth. 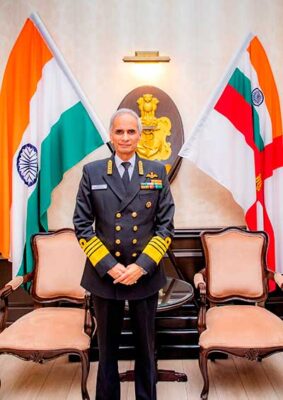 RA: The Strategic Partnership (SP) Model provides an excellent opportunity to build up/ create a second line for submarine production in the country and also achieve technological convergence. Are these going to be at the core while evaluating the Project 75I bids? Your views.

CNS: Indian Navy is an instrument, not only for power projection, but also for diplomatic outreach. Towards this, conduct of joint/ multi-lateral exercises is an important activity to bring together different Navies. While Navies may operate in different regions, there is a need to co-operate on issues of common interest, such as anti-piracy, HADR missions, maritime security etc. Navy-to-Navy interactions enhance mutual understanding, cooperation and inter-operability between maritime forces. These exercises also enable us to project our capabilities, hone operational skills and imbibe best practices and procedures. Engagement with foreign Navies allows benchmarking of our capabilities against international standards and also develops mutual friendship and respect for each other’s maritime endeavours.

Navy-to-Navy interactions enhance mutual understanding, cooperation and inter-operability between maritime forces. These exercises also enable us to project our capabilities, hone operational skills and imbibe best practices and procedures. Engagement with foreign Navies allows benchmarking of our capabilities against international standards and also develops mutual friendship and respect for each other’s maritime endeavours

Exercises are well defined and carefully coordinated during planning conferences prior conduct of exercises. Sound planning undertaken by naval staff prior to exercises also enhances interoperability in joint operations, if necessary in future.

The Indian Navy has also been effectively engaging friendly maritime forces in the Indo-Pacific Region and beyond, through port visits, bilateral interactions, training initiatives, operational exercises and technical support arrangements, in order to establish a cooperative framework that promotes mutual understanding, development of Blue economy and enhance security and stability in the region. We support a free, open and inclusive Indo-Pacific – no nation should be excluded and the concept is not directed against any country. We also conduct joint exercises and passage exercises with a large number of navies. In 2020, we have conducted joint exercises with Oman, Japan, Thailand, Indonesia, Russia, USA, France, Bangladesh, Sri Lanka and the Malabar-2020, with participation of Australia, Japan and USA. MILAN-2020, unfortunately, had to be postponed due to the COVID-19 pandemic, and will be conducted subsequently. These exercises enhance our interoperability with like-minded navies and also send out a strong message to navies which do not follow the global rules-based order. Our comprehensive engagements aim to painstakingly build trust with like-minded nations during peacetime, since ‘trust’ is an attribute that cannot be surged.