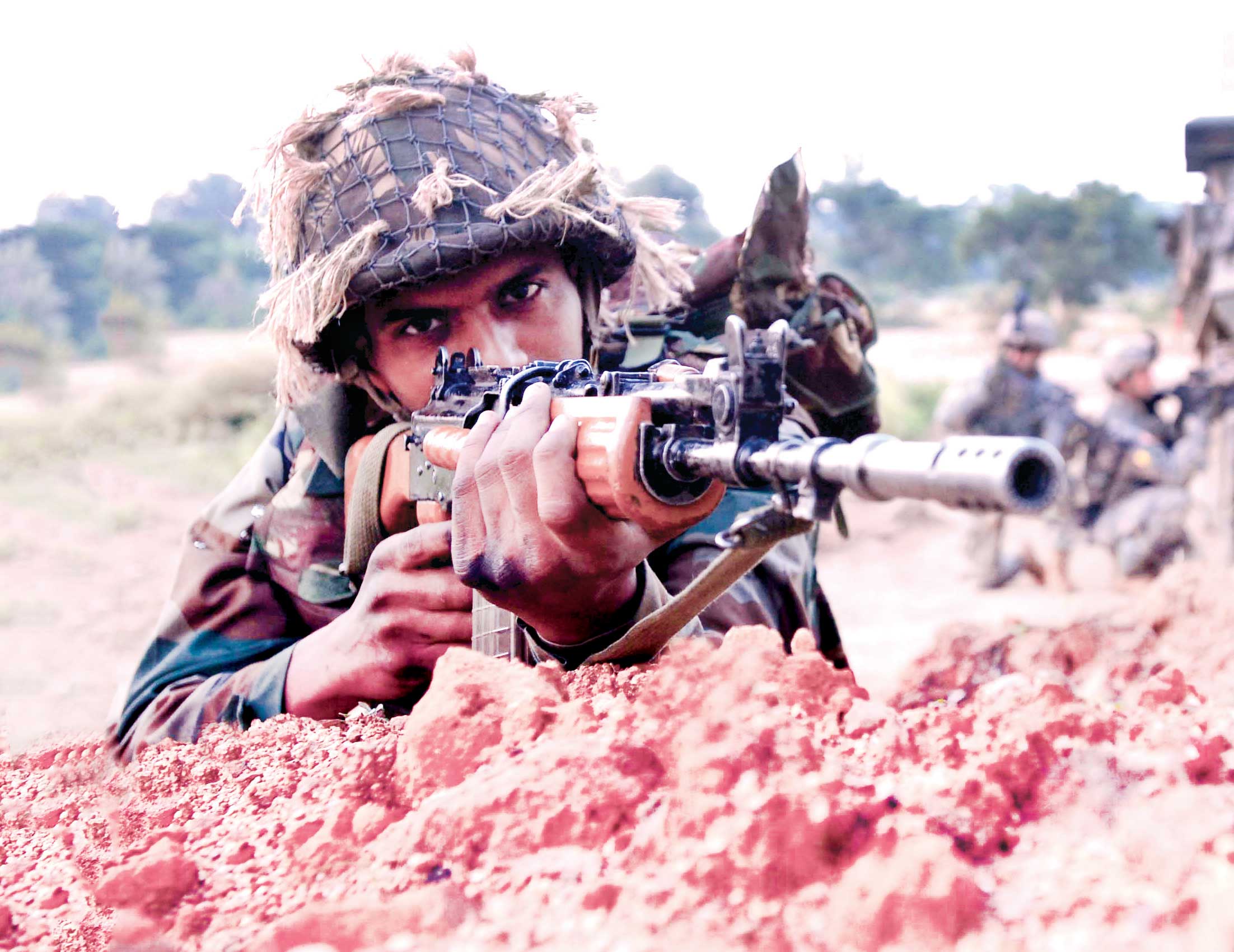 The process to replace the glitch prone INSAS began more than a decade ago but has suffered multiple misfires. The primary reason was that those in charge of procurement kept changing the requirements. Had the army kept its General Staff Qualitative Requirements (GSQRs) at a realistic level, Indian soldiers wouldn’t be saddled with a malfunctioning rifle.

Initially, the army wanted a rifle which could shoot two types of cartridges – the Kalashnikov 7.62 mm and the INSAS 5.56 mm, but it found no international arms manufacturer willing to bite the bullet. According to Lt Gen (retired) Syed Ata Hasnain, former commander of XV Corps based in Jammu & Kashmir, “The Indian Army’s dream personal weapon of twin calibre capability with changeable barrels to cater for different calibres has resulted in the acute delay in the final decision. There appears to be no takers for this variety which the General Staff had desired.”

Until the 1980s, Indian soldiers were more or less happy with the locally made 7.62 mm Self Loading Rifle. The situation worsened when the Defence Research and Development Organisation (DRDO) instead of improving a tolerably good rifle, offered to design a new one. The army’s ever changing demands combined with the DRDO’s over-reach proved fatal for the INSAS project.

Although the INSAS was more accurate than an AK-47, it flopped because of reliability issues. Indian soldiers hated it. According to Army officers, the 5.56 calibre rifle either jammed or its components would crack in the cold and icy mountains

Military historian Timothy D. Hoyt explains in ‘Military Industry and Regional Defense Policy – India, Iraq and Israel’: “In the early 1980s, DRDO made a commitment to develop a new series of 5.56 mm small arms for the Indian armed forces called the INSAS. Both Heckler & Koch of Germany and Steyr of Austria offered to provide for India’s immediate needs and transfer technology worth $4.5 million for free. These offers were declined and DRDO spent the next decade, and approximately Rs 2 billion (about $100 million in 1990), reinventing a family of small arms based heavily on Steyr and H&K technology. In the meantime, India imported AK-47 rifles from former Warsaw Pact nations to fill requirements. The INSAS finally entered service in the late 1990s.”

How not to make a rifle

Although the INSAS was more accurate than an AK-47, it flopped because of reliability issues. Indian soldiers hated it. According to Army officers, the 5.56 calibre rifle either jammed or its components would crack in the cold and icy mountains. Sometimes the gun would fire in full-auto mode when the selector switch was turned to the burst mode (three shots at a time). Incredibly, this happened despite the rifle not having a full-auto mode. The situation was so dire that it led to emergency imports of tens of thousands of Kalashnikovs. Kalashnikovs were hurriedly sent to the frontline, proving to be both “lifesavers and face-savers” at Kargil.

Why is it that India can manufacture supersonic aircraft, large surface warships, sophisticated diesel attack submarines, and spacecraft that can travel to Mars 650 million km away, but it cannot produce a simple assault rifle that works?

Incubate small arms start-ups, support them with assured orders so their production lines are kept going for years, helping them attain critical mass. This will help create a weapons ecosystem in which private players can compete with each other

The INSAS rifle is made by the Ordnance Factories Board (OFB) but the government run organisation has failed to produce a world class assault rifle despite four decades of work. Thousands of crore of rupees have gone down the drain – or more likely into the pockets of vested interests. This is because the OFB is managed not by weapons experts but IAS bureaucrats who may have never held a gun in their lives, forget having knowledge of ballistics or propulsion. Soldiers and officers with battlefield experience, especially in the area of urban warfare, are not involved in weapons design nor is their opinion sought.

The INSAS rifles designed by the OFB lack finish and look amateurish, clearly not meant for one of the largest fighting forces in the world. According to the website www.indiansforguns.com, the designers have tried to copy the AK-47 and AK-74, with parts scaled down from the larger Russian rifles. There’s plastic everywhere, including the magazine, causing it to crack or jam when used in extreme cold conditions. “The crude scratching that passed off as lettering was too shallow and the lazy (workers) at the factory simply squished some white enamel over the general areas and didn’t even bother to wipe off the excess.”

For a country like India which has spectacularly failed to manufacture something as simple as an assault rifle for four decades, the best option is to keep things simple. Here is a primer for small arms acquisitions.

1. Incubate small arms start-ups, support them with assured orders so their production lines are kpet going for years, helping them attain critical mass. This will help create a weapons ecosystem in which private players can compete with each other. Think of India’s telecom sector which was a monopoly of BSNL and MTNL for decades, with customers waiting in line for up to three years to get a phone line. Deregulation opened up the sector to private enterprise and today India has one of the most competitive telecom sectors in the world.

2. Joint venture partnership. This is already in the pipeline, with a 49.5-50.5 joint venture between Russia’s Kalashnikov and the OFB. The plant in Korwa, UP, will produce a whopping 750,000 AK-203 rifles for the Indian armed forces. The deal gives India access to Kalashnikov’s supply chain and technical expertise. In theory, India should get the complete technology of manufacturing and development which will elevate the OFB to a certain level where it will be able to acquire the knowledge and expertise of manufacturing a modern assault rifle. According to Hoyt, “Licensed production adequately responds to most military needs, provides leverage against supply blackmail by external powers, and demonstrates Indian military and industrial capabilities.” However, in practice, things may pan out differently. For instance, problems have already cropped up over pricing the AK-203, a pointer to the flip side of licensed production.

3. Limited imports. Imports should be permitted only if a rifle is not available through the Make in India route. Plus, it should be only for emergencies, as during the Kargil War, and through the government to government route to avoid kickbacks.

The OFB’s failure is not a reflection of indigenous talent. In fact, there is no lack of ingenuity in the defence forces. As the army was wading through its procurement bureaucracy, a soldier modified the INSAS rifle, reducing its overall length and weight, allowing corner shot capability. The modified weapon was reportedly more stable while firing, compact, easy to carry and has better accuracy. Prime Minister Narendra Modi was so impressed that he gave the soldier – whose identity remains secret – an “innovation certificate”. It’s sad that innovators like this soldier remain unsung and are unlikely to be absorbed into the defence industry. India must acknowledge the value of soldier technocrats.

– The writer is a globally cited defence analyst. His work has been published by leading think tanks, and quoted extensively in books on diplomacy, counter terrorism, warfare and economic development.