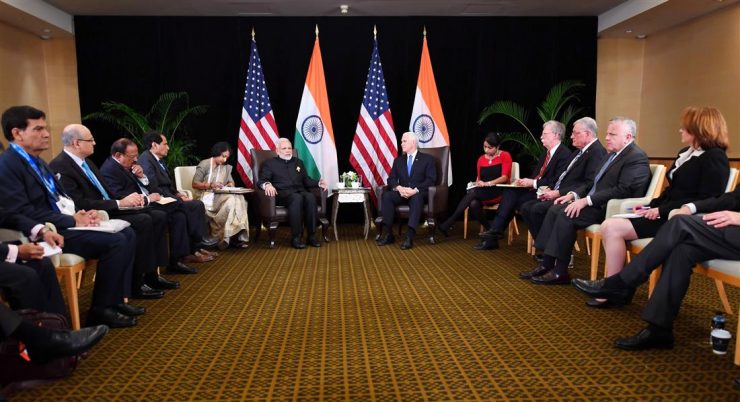 SINGAPORE. The bilateral meeting between Prime Minister Narendra Modi and United States Vice President Mike Pence on the sidelines of ASEAN-India Summit comes out to be a good and positive one, a top official from the Ministry of External Affairs (MEA) said.

“It was a very good meeting, I can tell you it was a very positive meeting. There was a great deal of positive energy in the room,” Foreign Secretary Vijay Gokhale said in a media briefing on November 14.

The Prime Minister also conveyed great appreciation that President Trump had organized a meeting in the White House on November 13 to celebrate the Indian festival of Deepawali.

Bilateral relations as well as regional and international issues of importance came up for discussion during the meeting between the two leaders. Prime Minister Modi referred to new opportunities for India-US bilateral relations under the Trump Administration since President Trump took office.

Vice President Pence specifically acknowledged that India has made substantial progress economically as well as diplomatically in regional and international affairs. He appreciated the strong leadership that Prime Minister Modi has shown.

Vice President Pence observed that India is a positive factor in regional and international relations and said that the United States looks forward greatly to working with India on various issues both on political and economic side to ensure that the two countries have a fair rules based international order. The Prime Minister reciprocated the same sentiment.

The two leaders also agreed that India and the United States should be on the basis of shared values at various international forums and should build up possible cooperation in a number of areas.

The Indo-Pacific also figured during the discussion between Prime Minister Modi and Vice President Pence. The Prime Minister referred to his speech here in Singapore in June at the Shangri-La Dialogue in which he had outlined India’s vision of the Indo-Pacific. He conveyed to Vice President Pence that this vision of Indo-Pacific was gaining acceptability and that India and US should utilize the upcoming East Asia Summit to further build up on that.

Vice President Pence also spoke of a free and open Indo-Pacific. He noted that India’s contribution in ensuring this would be important and they discussed how both sides can strengthen cooperation in this area to ensure that this is an area of growth, prosperity, development and benefit for the countries of the region in the future.

On bilateral issues, trade related matters came up for a brief discussion. “That is important for both sides and we agreed that in a new relationship that we are building with the United States where trade is expanding we need to find ways in which we can help that process to take place,” Gokhale added.

Prime Minister remarked in the last two years, i.e. the two years when President Trump assumed office American exports to India have grown by 50 per cent. It is perhaps one of the countries, perhaps the only one, of the top 10 countries with which the United States has a trade deficit where the deficit has actually reduced last year, and is on course to further reduce this year and this is important from the perspective of the United States.

There was a lot of discussion on energy, this is a new sector in the Indo-US relations. “We have begun importing oil & gas from United States. It is expected to be valued about $4 billion this year and we expressed our readiness to import more oil and more gas from the United States as a way of expanding our trade,” the Foreign Secretary said.

Both sides felt that the defence sector to be important. The two sides agreed that there had been a substantial enhancement in India-US defence relationship, in imports of equipment from the United States. The Prime Minister, however, stressed that there was a great opportunity for United States in making defence equipment and setting up defence industry in India. “Not only that India is a substantial market but because the way we are placed regionally we can become a hub for exports to the rest of the region,” Prime Minister Modi noted.

He conveyed to Vice President Pence that he hoped the Trump Administration would recognise this as a new opportunity, as a new economic opportunity as well. Both the leaders also discussed that how India and US should enhance this sort of trade. The outcomes and the follow up of the recently held 2+2 Ministerial meeting were also discussed, both on foreign policy and the defence side.

There was some discussion on the issue of terrorism and Vice President Pence referred to the coming 10th anniversary of the Mumbai Terror Attacks, which is 26/11. In this context he greatly appreciated the cooperation which has been built between the United States and India on counter-terrorism.

The Prime Minister, while thanking him for these words, also reminded him that in one way or another all the traces or all the leads in global terror attacks ultimately leads to a single source, a single place of origin and in that context he did point out that the mainstreaming of the people involved in Mumbai Terror Attacks in a political process which had taken place in a recent election in Pakistan should be a matter of serious concern not just to the two countries i.e. India and United States but to the International community.

“There was some good understanding on the area of how we move forward in building cooperation on counter-terrorism and both countries recognized that this is a challenge which we will have to fight together and to fight along with the rest of the international community,” Gokhale noted.

On this occasion, the Prime Minister appreciated President Trump’s hosting the Diwali event on the contributions that have been made by the Americans of Indian origins, the Indian-American community for the last three decades economically, culturally, in terms of integration, in terms of building or helping the building of democracy.

In this context Prime Minister Modi conveyed to the Vice President that Indians when they come to the United States not only bring their talent and capacity to innovate, capacity to excel but also they are imbued in democratic values. That is a tradition in India which they carried to the United States and therefore the value addition is in economic terms but also in building the political and social fabric of United States. Prime Minister Modi therefore expressed the hope that this would be the approach that United States might take when it looks at the whole issue of the H1B visa and this was appreciated by Vice President Pence, the Foreign Secretary said.

“There was a sense of convergence both on bilateral issues and on global issues and we look forward to taking the relationship now in the coming months and in 2019,” the Foreign Secretary added.