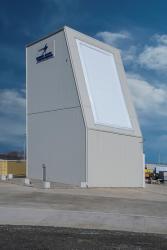 Moorestown, N.J. Lockheed Martin’s Long Range Discrimination Radar (LRDR) has completed a closed loop satellite track with tactical hardware and software marking a significant achievement as the program continues to meet its technical milestones and works towards delivery to the Missile Defense Agency (MDA) in 2020 at its Clear, Alaska, site.

In preparation for full-rate manufacturing starting in the beginning of 2019, Lockheed Martin utilized production hardware, tactical backend processing equipment along with tactical software to successfully demonstrate system performance in an operational environment. A series of tests were performed in this environment including a closed loop satellite track demonstrating significant maturity of the program.

As a risk mitigation effort in achieving delivery to MDA in 2020, Lockheed Martin invested in a Solid State Radar Integration Site (SSRIS) in Moorestown, New Jersey, which was utilized to conduct this testing. The SSRIS is a scaled version of the final LRDR radar and will continue to be utilized for Solid State Radar (SSR) development.

“I am extremely proud of what the team has accomplished since the award in 2015,” said Chandra Marshall, LRDR program director, Lockheed Martin, “We have designed and produced a scaled LRDR system that is running with the actual tactical processing equipment and tactical software successfully. Demonstrations executed to date prove that Lockheed Martin has designed a solid state radar system that is on schedule to deliver on time and is on track to achieve its mission to defend the homeland.”

LRDR completed its critical design review in 2017 and in September began construction of the radar in Alaska. “Since the contract was awarded in 2015, the LRDR team has been moving fast and keeping a steady pace achieving every milestone successfully on the path to delivery in 2020,” according to Marshall.

The radar system will serve as a critical sensor within MDA’s layered defense strategy to protect the U.S. homeland from ballistic missile attack. LRDR will provide 24/7/365 acquisition, tracking and discrimination data to enable defense systems to lock on and engage ballistic missile threats.

LRDR adds the capability of discriminating threats at extended distances using the inherent wideband capability of the hardware coupled with advanced software algorithms. LRDR combines proven SSR technologies with proven ballistic missile defense algorithms, all based upon an open architecture platform capable of meeting future growth. Lockheed Martin sees SSR as the cornerstone of its current and future radar development and is key in its development of LRDR.

The program is built upon the U.S. government’s long-term investment in S-Band radar, ground-based radar, and systems integration, as evident in such Lockheed Martin technologies as the Aegis Combat System, Space Fence and Aegis Ashore. Earlier this year, Lockheed Martin demonstrated its commitment to advancing SSR technology and addressing emerging and evolving threats by connecting key components of LRDR and its Aegis Ashore technologies, demonstrating the ability to greatly increase operational performance, efficiency and reliability of Aegis Ashore. Connecting these systems also provides the warfighter with earlier intelligence and expanded situational awareness.