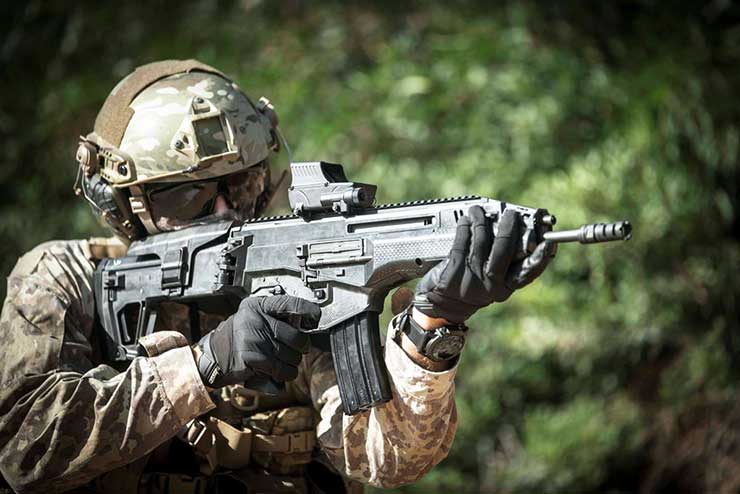 The Israeli company in recent years developed two new assault rifles – the Arad and the Carmel.

The Israeli company says that the ARAD is designed for Infantry use, special units. The rifle can be changed easily to shoot two different caliber bullets – 5.56 and 300 BLK.

IWI ARAD is equipped with a picatinny rail to enable the use of a variety of optics and other attachments. The picatinny rail is an integral part of the upper receiver of the rifle. In addition, M-LOK rails at the 3, 6 and 9 o’clock positions along the hand guard. It includes a telescopic butt stock which allows the users to adjust the length individually for their particular needs.

According to IWI, the ARAD is designed to address the needs of Special Forces as well as the various infantry forces. It includes several advanced features that enable operational flexibility. Fully ambidextrous, the rifle consists of a short-stroke gas piston with a gas regulator in two or 3 positions, which allows constant operation in all environmental conditions. A two-step enhanced trigger ensures both comfort and shooting accuracy.

The company has also developed the CARMEL ‒ a multi-purpose, modular, 5.56X45mm caliber assault rifle for modern warfare, ideal for maneuvers between different combat zones and for extended combat duration ‒ which has been supplied to many customers around the world.

The company says that the CARMEL is designed for minimum operator and armorer level maintenance. The CARMEL can be fired with folded stock. It has adjustable cheek rest.

The CARMEL is a fully ambidextrous weapon: Safety Lever, Magazine Release, Bolt Catch, non-reciprocating charging handle that can be easily changed from side to side within seconds by the user. It also has an enlarged trigger guard for easier access for glove use.

The new rifles are offered now to many armed forces and according to the Israeli company the Indian plant can manufacture both.

– The author is an Israel-based freelance writer. He has served in Israel Defense Forces.