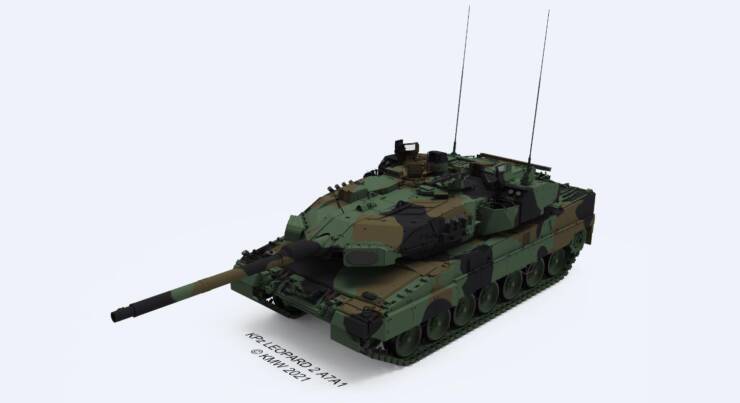 The agreement was signed by Director General of the Israel Ministry of Defense Maj. Gen. (Res.) Amir Eshel, and by an official in the German Federal Office of Bundeswehr Equipment, Information Technology and In-Service-Support. It includes the provision of systems for a company of tanks, interceptors, and spare parts as well as operational and technical training. The systems will be delivered over the next several years.

Head of the Directorate of Research and Development in the DDR&D Brig. Gen. Yaniv Rotem, speaking on the occasion, said: “This is a significant agreement, which further deepens the excellent relations between our countries. We thank the German Ministry of Defense for its expression of confidence in our defense establishment and Israel’s industries. We are confident that the system will maximize the protection and capabilities of Germany’s MBTs.”

Head of the Combat Division of the German Federal Office of Bundeswehr Equipment, Information Technology and In-Service Support, Colonel Jürgen Schmidt, said: “We are looking forward to use the very well-established Israeli TROPHY System for the protection of our Main Battle Tank (MBT) LEOPARD 2. We would like to thank the Ministry of Defense of the State of ISRAEL for its excellent cooperation with respect to advanced active protection systems for the benefit of German troops.”

In another statement, EVP and Head of Rafael’s Land and Naval Systems Division, Dr Ran Gozali: “Germany is joining a group of nations who have chosen the TROPHY APS to protect their troops and assets from the ever-increasing threat of anti-armor warfare. We are thankful to the German government for joining other user nations and for their confidence in our system and our experience, and we look forward to working with KMW.”

The Trophy developed by state-owned Rafael has been designed based on the vast experience of the Israel defence forces (IDF) in many ways that involved battles, where main battle tanks and armored personnel carriers took active part.

According to Rafael, the system is capable of neutralizing all types of threats i.e. from rocket-propelled grenades to high-explosive rounds and tandem warhead anti-tank guided missiles.

According to the company, the first combat experience of the Trophy was in March 2011 in an operation at the Gaza border, when a Trophy-equipped Mk4 destroyed an RPG-29 rocket with no damage to the protected tank or its four-man crew.

Since then the Trophy has been activated “hundreds of times” and neutralized “dozens “of threats.

The most impressive success was during the 2014 “Protective Edge” in Gaza when the Hamas fired a variety of anti-tank weapons on the Israeli Merkava 4 tanks and Namer APCs.

In at least one encounter the Trophy proved itself protecting a Merkava Mk 4 tank against a Russian made Kornet anti-tank missile from a distance of some 4 kilometers.

According to Rafael, the Trophy is also a situational awareness system that provides the tank or APC crew with real time information about a developing threat. “After the first rocket or missile is intercepted the data from the system’s sensors allows the crew to operate its weapons to suppress any more incoming threats or relay the data to other platforms carrying weapons on the ground and in the air,” a company source said.

When a threat is detected by the Trophy the hard kille is made by a projectile that is not carrying explosives. “This is a kinetic kill that certaes almost none dangers to infantry soldiers that may be in the vicinity of the attacked armored vehicle.”

This neutralization without detonation is one of the most remarkable features of the Trophy.

The projectile does not activate the warhead of the incoming weapon, rocket or missile.

The Trophy was declared operational by the IDF in August 2009, and is currently in full production. Merkava 4 tanks integrated with Trophy active protection systems are presently being deployed in combat areas along Israel’s borders.

• A 360 Degree protection while permitting sectors of the vehicle-mounted system to be rendered inactive when necessary for the protection of troops on the ground.
• A 360 Degree situational awareness by detecting all incoming threats and identifying their launch position.

• Neutralizes simultaneous threats arriving from one or more directions

• High kill probability while static or on the move

The Trophy system is adaptable to any combat platform. Once a platform is chosen, a short trade study is completed to work out any integration issues that may arise. Numerous elements are taken into consideration for each vehicle variant or type. For vehicles with relatively basic or light armor, e.g. the Stryker, the Trophy provides full protection against all types of RPG (as well as other threats) due to the fact that the Trophy destroys these types of threats without detonation.