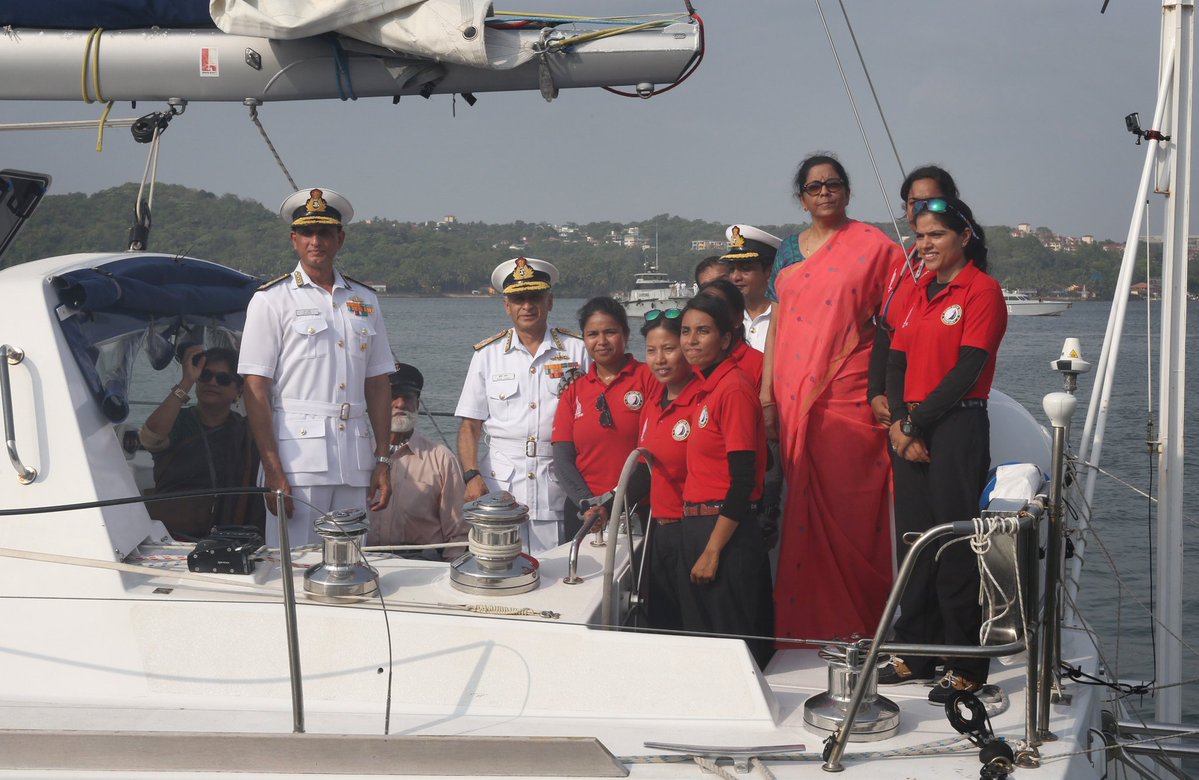 The all-women crew of Tarini was received at the jetty by Defence Minister Nirmala Sitharaman, who had also flagged them off on September 10 last year. Chief of the Naval Staff (CNS) Admiral Sunil Lanba, Vice Admiral AR Karve, Flag Officer Commanding-in-Chief, Southern Naval Command, senior officers and enthusiastic members from the naval community both serving and retired, as well as civilians were present at the Naval Boat Pool to welcome INSV Tarini.

It was a poignant moment for the “Navika Sagar Parikrama” team which included a number of naval personnel who worked behind the scenes from the time of origination of the idea of circumnavigation by an all women crew, right through the planning, implementation and training till the successful execution of the voyage. The women crew themselves were ecstatic on completion of the voyage.

Speaking at the occasion, the Skipper Lt Commander Vartika Joshi said, “We knew at the very start of this voyage that we had a daunting task ahead. However, the many challenges we encountered brought in a new found strength from within, which we ourselves never knew we were capable of. Our close bonding helped us overcome those difficult times.” It was also a time for happy reunion of the crew with their families after a period of over eight and half months.

Ms Sitharaman, on the occasion, said that she is extremely honoured and humbled before the crew of team Tarini for what they have achieved. She further added that “it’s not the girls achieving, it’s the youngsters from India achieving. The women of this country have shown that it is possible for the youngsters, if they want to do something, that they can indeed do it, by showing commitment, grit and dedication”.

In his address, the Navy Chief said, “The grit and determination displayed by these young women officers would definitely encourage future generations to take on daunting challenges and strive for success”.

During her 254 day long voyage, the vessel has covered over 22,000 Nautical miles, visiting five countries – Australia, New Zealand, Falkland Islands (UK), South Africa and Mauritius. At each of these countries the crew received a rousing welcome both from the Indian diaspora as also from the local community. During the course of her voyage, the vessel has met all criteria of circumnavigation, viz. crossing the Equator twice, crossing all Longitudes, as also the three great capes (Cape Leeuwin, Cape Horn and Cape of Good Hope). The expedition was covered in six legs, with halts at five ports: Fremantle (Australia), Lyttleton (New Zealand), Port Stanley (Falklands), Cape Town (South Africa) and Port Louis (Mauritius).

The crew and the vessel encountered rough seas on numerous occasions during the voyage. The extremely cold climate coupled with stormy weather conditions especially in the Southern Ocean made the task of circumnavigating the globe highly daunting and challenging. The vessel also witnessed winds in excess of 60 knots and waves up to seven meters high, whilst crossing the Pacific Ocean.

The indigenously-built INSV Tarini is a 56-foot sailing vessel, which was inducted in the Indian Navy in February 2017, and has showcased the ‘Make in India’ initiative on the International forum.

The expedition titled ‘Navika Sagar Parikrama’ is in consonance with the National policy to empower women to attain their full potential. It has showcased ‘Nari Shakti’ on the world platform and helped change societal attitudes and mindset towards women in India by raising visibility of their participation in challenging environs.

The crew also collated and updated meteorological, ocean and wave data on a regular basis for accurate weather forecast by India Meteorological Department (IMD), as also monitored and reported marine pollution on the high seas. They interacted extensively with the local populace, especially children, during the port halts to promote Ocean sailing and the spirit of adventure.

A senior naval officer said, “The women officers have done the country proud not only in showing the Indian Flag at distant shores but also in demonstrating the sea faring capability of Indian women.”

The women officers will be proceeding to New Delhi shortly, where they will meet the Prime Minister.