Tel Aviv. The Sa’ar 6 Class corvette, INS “Oz”, arrived in Israel yesterday; after a two-week voyage from Germany, the ship has docked in its Haifa naval base. The INS “Oz” is the second of four Sa’ar 6 corvettes to join the Israeli Navy. Its arrival is a significant milestone in strengthening the resilience and economy of the State of Israel. The Sa’ar 6 corvettes will be a key pillar in the maritime protection of both Israeli waters and energy resource systems at sea.

During the coming months, the INS “Oz” will undergo the installation process of additional combat systems (the majority of which are produced domestically in Israel). Upon completion, the INS “Oz” will enter full operational service.

The ceremony for the ship’s arrival was attended by Minister of Defense, Mr. Benny Gantz and Commanding Officer of the Israeli Navy, Vice Admiral Eli Sharvit. Participating in the ceremony was also a team of INS “Oz” sailors who returned with the ship to Israel.

Attending the ceremony, Minister of Defense, Mr. Benny Gantz in his address said, “You who are standing here, you fought in an operation combining forces with all the troops as part of the concept of multi-dimensional combat. This is just an example of the innovative and operational capabilities that the Navy is developing. An example of the power we are willing to wield on various fronts. This includes the Lebanese front, and farther away. In the face of attempts to arm our enemies we deploy systems that have improved stability in the region. The ability to develop these capabilities is derived from a long-term vision, and the ability to preserve them and gain an advantage over our enemies requires us, as a political echelon, to advance a multi-year plan that will allow certainty and development for the forces of the IDF.” 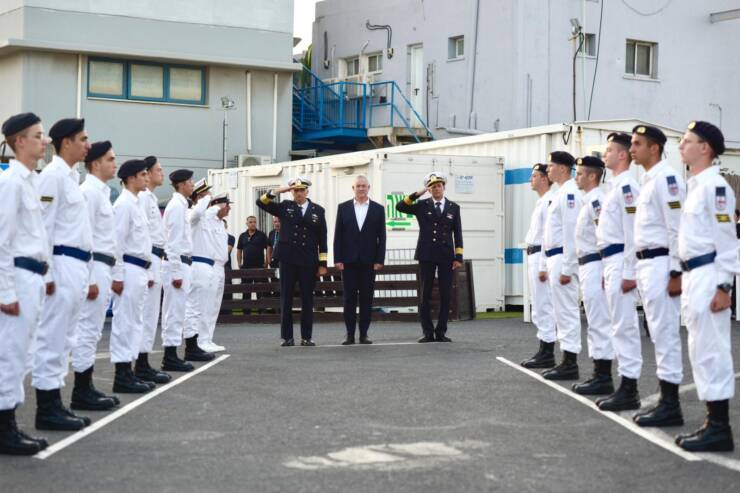 Commanding Officer of the Israeli Navy, Vice Admiral Eli Sharvit, present at the ship arrival ceremony said: “The commanders of the INS “Oz” and its on-board staff are laying another cornerstone in Israel’s naval defensive wall. The addition of the Sa’ar 6 corvettes to the Navy is as necessary as fresh air to breathe – as the security situation is constantly changing and new threats raise their heads. There is no doubt that the INS “Oz”, like the rest of the Sa’ar 6 corvette flotilla, is a technological marvel. Just as it is a symbol of progress, it is also a celebration of extensive collaboration and ground-breaking human achievement.”

One of the main missions of the SAAR 6 corvettes is to protect the Israel exclusive economic zone (EEZ). The Israeli EEZ is threatened from two sides – From Lebanon where the Hezbollah has acquired maritime systems, and from Gaza , where the Hamas is increasing its maritime capabilities. The two terror organizations in the past tried to use the sea to penetrate Israel to perform terror attack. Since Israel has discovered huge reservoirs of gas in the Mediterranean, the gas pumping rigs are a potential target for these two terror organizations.

An exclusive economic zone (EEZ) is a sea zone prescribed by the United Nations Convention on the Law of the Sea over which a state has special rights regarding the exploration and use of marine resources, including energy production from water and wind. It stretches from the baseline out to 200 nautical miles (nmi) from its coast.

-The writer is an International Roving Correspondent of the publication. Views expressed are personal and do not necessarily reflect the views of Raksha Anirveda