By Cmde Ranjit B Rai (Retd) This is the story of a path setting ship of Indian Navy and all round operational performance of the 3,000 tonne modern Leander Frigate INS Nilgiri (F33). Indian Navy selected the proven Leander design as there were 35 Leanders in service with the Royal, Australian, New Zealand and Dutch Navies. The design was licensed from Yarrow Shipyard Ltd in Scotland and Vickers Ltd to build the ship in India at Mazagon Dock Shipbuilders Ltd (MDL), Mumbai (Then Bombay) when Rear Admiral SM Nanda was its CMD.

The ambitious project was supported by Defence Secretary HC Sarin. On October 23, 1968 Prime Minister Indira Gandhi applied ‘Kum Kum’ on Nilgiri’s stern and launched the warship at MDL, and on June 3, 1972 she commissioned Nilgiri into the Indian Navy. The project was steered by the Leander Project Directorate at Naval Headquarters and its team in Yarrow Shipyard Ltd under Commodore Kapadia to work out scheduling of supplies, base depot spares and technical support, indigenisation of items like valves from Leader company in Jalandhar (Jullundur during British period), pumps from companies in Pune and hull fittings.

Nilgiri’s story is worth recalling, as it is the story of how the Indian Navy’s rank and file, shipyards and dockyards imbibed the world’s modern naval technology and best ship building practices, which has been taken to heights by today’s Navy with self reliance and a will to Make in India. Nilgiri gave confidence to the Navy for building ships in Indian PSU shipyards.

Nilgiri was manned by selected 18 officers and 240 sailors, and key officers and sailors stood by her in MDL and contributed to speedy ship building because 20 key officers and sailors had spent six months in UK for pre-commissioning training. This author spent six months with the Royal Navy (RN) and a month in Yarrow Shipyard Ltd in Glasgow and was deputed to swing Royal Malaysian Navy’s corvette, KD Rahmat’s magnetic compass and act as Navigating Officer for the three days of her final machinery trials (FMT) at sea by Yarrow, having qualified at HMS Dryad in Gosport to be the Navigating Officer and first helicopter controller of Nilgiri. Naval Headquarters re-appointed this author, a junior Lt Cdr to be the Executive Officer from Navigating Officer on return to India, and take the ship out for sea trials in 1971 when she was hurriedly being readied for the 1971 war, but war ended. This article in Navy week-2019 is a tribute to the builders, Captain and crew of that efficient ship, before it is all forgotten.

The ship was fitted with the latest Dutch radars from Signaal, later taken over by Thales of France. Nilgiri’s design was ingeniously broadened and lengthened for the Leanders with latest equipment and the same propulsion.
The Nilgiri was equipped with latest UA 8/9 Electronic Warfare (EW) receivers and jammers and the analogue cum hydraulic controlled Royal Navy 2XMk 6 Vickers 4.5 inch and two 60/40mm and two 20mm Oerlikon guns and two Seacat anti aircraft missile firing directors on the port and starboard sides. The Seacat gunnery team was sent to Devlali to train on the Army Tigercat system that gave the crew immense confidence when operating at sea.

The radars on Nilgiri included a Sierra band DA-05 surface search radar, a Lima band LW-04 long range air search radar, an Xray band Signaal Z-06 navigational radar and MRS-3 long range and MRS-8 CRBFD close range fire control system in putting the operations and sonar control room which heralded analogue computerisation into the Indian Navy for war fighting, with switchable communications consoles and the ARL plotting table. The sonars were the Graseby Type 750 for underwater submarine search and a Type 170 attack sonar and an underwater telephone to prosecute submarines with the Italian Whitehead A244S torpedoes fired from the triple ILAS 3-324 mm torpedo tubes, now being made in India by Larsen & Toubro Ltd and are exported. 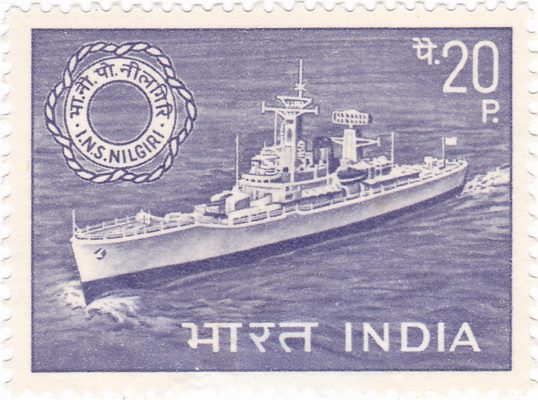 All first of class trials including full speed trials by the boiler supplied from Vickers in India and turbine propulsion supplied by BHEL and tilting trials supervised by Indian technical officers and guarantee specialists from abroad were undertaken with no hitches. It set a benchmark standard to leave no pending item in the Form D448 and clear timely bills to the builder Mazagon Dock Ltd and suppliers and credit must go to the Navy’s Warship Overseeing Team (WOT), Machinery Trials Unit (MTU) and Warship Production Superintendent (WPS).

For the commissioning ceremony in 1972, Mrs Gandhi was accompanied by VC Shukla, Minister for State for Defence Production. She was received by Admiral SM Nanda, the Chief of the Naval Staff at Bombay Naval Dockyard breakwater where she inspected the ship’s guard. Later she was introduced to the Captain DS Paintal, a professional torpedo and anti-submarine specialist trained in UK who in turn introduced the officers and heads of department of Nilgiri.
Proudly lined up in No 2s on a lovely pre-monsoon day was this writer Lt Cdr Ranjit B Rai as Executive Officer and second in command late Cdr SBN Singh, President of the Wardroom and later Vice Admiral (COM) and others. Admiral Nanda escorted Mrs Gandhi on board where VC Shukla, Rear Admiral BA Samson (CMD MDL) and MDL’s Chief Constructor trained in Canada RN Sethna and Flag Officers were seated. Captain DS Paintal read out the commissioning warrant issued by the CNS and as the guard saluted and the band played the national anthem the Nilgiri became INS Nilgiri and donned the Indian Naval Ensign at the stern, and National Flag in the bow to announce she was now part of the Western Fleet.

Nilgiri’s performance in the first one month at sea off the Indian coast with the Western Fleet and off Singapore with a first ever ASW Alouette helicopter with torpedoes and depth charges on board for trials by the Indian and Royal Navy trial team surprised the RN trial team and the guarantee specialists. Niligiri’s weapon and electronics performance was as per specifications and that confidence along with lessons of the Osa class missile boats action to sink three ships of Karachi in the December 1971 war is what fired Indian Navy’s quest to make bigger ships in India with surface and air attack missiles. India’s present strength of the three 6,000 tonne Delhi and three 4,300 tonne Shivalik class BrahMos and Barak firing platforms can trace their lineage to the Nilgiri class which was followed by 3,500 tonne Taragiri and Godavari class when Indian Navy designers extended the hulls and broadened the beam and made sure the same propulsion boiler-turbine system gave the same speed. The ships were fitted with the Agouti system to minimise propeller cavitations noise.

The First Sea Lord Admiral Sir Michael Pollock embarked INS Nilgiri at Bombay on a visit to India in 1973. He congratulated the ship and an engineer by profession Cdr Dasguptam when the speed log clocked 27.3 knots. Only two Leanders in the Royal Navy he said had clocked 28.5 knots in cooler seas. Admiral of the Fleet Earl Mountbatten of Burma who had also been First Sea Lord in 1959 congratulated the Indian Navy, that he was fond off, with a message to CNS Charles Nanda. Gen K Sundarji visited INS Niligiri in 1972 and admired the ship. Nilgiri was decommissioned in 1996, and sunk on April 24, 1997 as a target in a missile test firing.

TYPE 17A SHIVALIK AS THE REBORN NILGIRI TO JOIN IN 2022 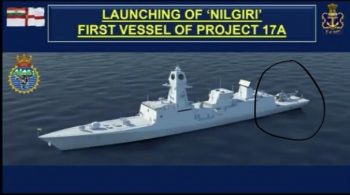 Nilgiri is the name also given to first lead ship of the Nilgiri-class stealth guided missile Shivalik Type 17A frigates being built by MDL. The keel was laid down on December 28, 2017 and it was launched on September 28, 2019. The ship is expected to be commissioned by August 2022. The 6,800 tonne ship with maximum speed of 28 knots is powered by two MAN 12V28/33D 6,000kw STC Diesels and 2 General Electric LM-2500 gas turbines supplied by Hindustan Aeronautics Ltd (HAL) with a range of 5,000 miles at 18 knots. The new Nilgiri is to be fitted with BEL HUMSA-NG bow sonar, the IAI EL/M-2248 Elta MF-STAR, S band AESA radar and a BEL Ajanta EW suite 4 Kavach chaff decoy launchers. The armament includes a BAE-5 inch 62-calibre Mk 45 naval gun and 8 VLS BrahMos supersonic and 32 Barak-8 AA missiles. The sonar suite includes the Humsa NG by BEL and the RBU-6000 ASW rocket launchers and triple torpedo tubes. Two Sikorsky 60R multi role ASW helicopters are planned to be embarked on this world class missile frigate. Shan No Varuna.