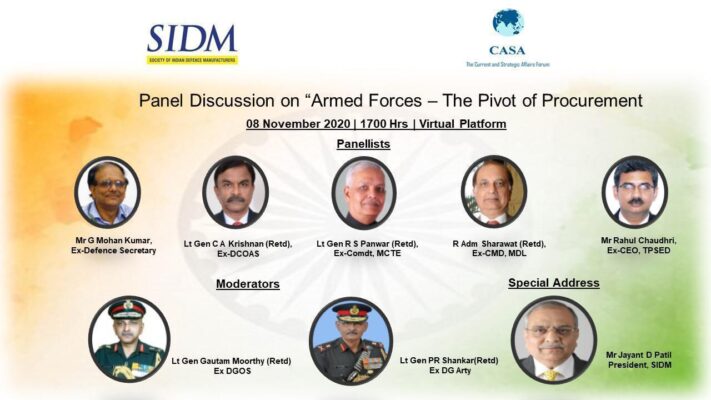 New Delhi. “The Armed Forces are the major stakeholders, and their capabilities need to be increased. Therefore, in my view Armed Forces should come forward and say what they want. They must be part of the procurement process,” said Former Defence Secretary G Mohan Kumar.

He was speaking at a webinar on ‘Armed Forces – The Pivot of Procurement’ organised by Society of Indian Defence Manufacturers (SIDM) in collaboration with The Current and Strategic Affairs Forum (CASA) on November 8. The webinar was second in the series with the theme of ‘Atmanirbharta in Defence.’

Apart from that there is a need of curtailment of delay in procurement as the timeline of delivery is important. There are several constraints which cannot be ruled out. So it is vital to have a wholeness in the system, he added.

“A proper industrial defence ecosystem in the country is required. Crux is that you cannot work in silos. There is a need to bridge the gap and it has to be driven by Armed Forces perspective,” Kumar said.

Welcoming the panelists, former Director General Ordnance Services (DGOS) Lt Gen Gautam Moorthy (Retd.) said: “We have opportunities of manufacturing along with start up as well as foreign vendors. We have Ordnance Factory Board (OFB), Defence Public Sector Undertakings (DPSUs). We have an increased Foreign Direct Investment (FDI) of 74 per cent from earlier 49 per cent. We banned 101 items from import. Despite all these we are far from self-reliance in defence.”

There is a need to fix authority, accountability and responsibility, and if all three are in place, there won’t be delay in procurement process, Lt Gen Moorthy noted.

Former Deputy Chief of Army Staff (DCOAS) Lt Gen CA Krishnan (Retd.) said, “We need to look at equipment manufacturing to delivery rather the whole procurement process besides National Security Policy. Without addressing all these procurement is far away.”

Adding to it Lt Gen Krishnan said DRDO should not be like a government office rather an R&D organisation. The persons deployed there should spend some time on the border or say in shipyards. On the same line, DPSUs need to be incorporated in the battle field to understand the Armed Forces requirements, he added.

Citing example of a few success of Dhanush, K9 Vajra, BrahMos etc – he said all these become a success because the proposals were prepared meticulously and ownership of the projects were taken by the different directorates.

“Focus should be on indigenous design then only we can talk of Atmanirbharta. We so far have failed to indigenise our R&D. There is a need of trio that is academic, industry and research organisation at one platform,” he said. As far as measures are concerned, DRDO should be put under Department of Military Affairs headed by Chief of Defence Staff (CDS), he opined.

Rear Admiral Rahul Sharawat, former CMD, Mazagon Dock Ltd began his talks saying that “there is no doubt that we have achieved a lot in Indian defence sector, but we need to achieve more. When I was in Indian Navy, and even went on to join Mazagon Dock Ltd (now Mazagon Dock Shipbuilders Limited) I was personally involved in many projects. I must say one thing over the years Indian Navy has been able to achieve a lot.”

“Indian Navy has its own Directorate of Naval Design (DND), it has acquired shipyards for its own requirement. Therefore, at the end there is a level of satisfaction that what we are getting, it is our own design and manufacturing,” the Rear Admiral said.

Navy is doing everything Indian, like it acquired MDL, GRSE, GSL, and it takes ownership of everything what it does. Indian Navy invests in shipyard, and it also spares its officers in shipyards to learn and oversee the projects in these shipyards, he said.

Rahul Chaudhri, former CEO, Tata Power SED, taking a jibe on Indian procurement process, said: “In 2006, China was number one importer of arms and India was number two. Since then a lot has been changed, and specially China changed the entire approach to remove the tag of number one arms importer. Therefore, we need to change our thinking process, and need to take tactical decision for any such implementation.”

Success is a team effort and it goes beyond silos, he noted.

Former Director General Artillery Lt Gen PR Shankar (Retd), who was one of the moderators in the panel, said that one important thing is coming out of the panel discussion and that is Armed Forces should come on board and be a part of the procurement process. “We need to be better equipped to handle complex project. There is a big ecosystem but all work in silos.”

Jayant D Patil, President, Society of Indian Defence Manufacturers (SIDM), in his special address said, “Procurement process of Indian Navy may be replicated for other Services.”

Patil, who is also Whole-time Director and Senior Executive Vice President for L&T’s Defence, said, “People who actually fight must be involved in the procurement process. There is something wrong with our process in the name of probity, which needs to be corrected.”

In the final analysis, experts were of the view that there is an earnest need of reform in the procurement process and it should be looked in a holistic manner for a speedier implementation.

One thought on “Indian Armed Forces Must be Part of Procurement Process, Say Experts”