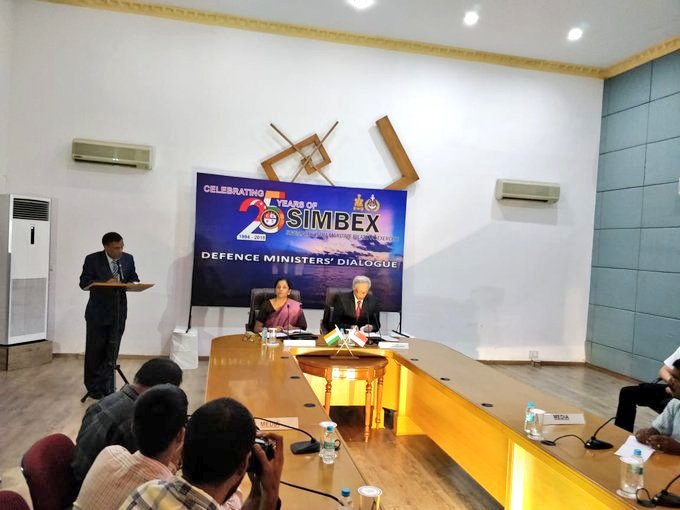 Both the countries signed the revised Defence Cooperation Agreement (DCA) in 2015 to further strengthen the long standing defence relationship between the Singapore Armed Forces (SAF) and the Indian Armed Forces.

The renewal of the Bilateral Agreement for the conduct of Joint Army Training and Exercises in India was of particular significance of the meeting concluded between the two Defence Ministers. This agreement gives out an exhaustive framework for the conduct of joint training as well as exercises for the Singapore Armed Forces in India and will further strengthen the cooperation between the two Armed Forces.

Singapore Defence Minister Dr Ng Eng Hen attended the final sea phase of the 25th edition of the Singapore-India Maritime Bilateral Exercise – SIMBEX on board INS Shakti. This multi dimensional exercise witnessed participation of ships, submarines a well as aircraft from both sides and live firings at sea. Both the Ministers complimented all personnel participating in the milestone event and for making it a success which is a testament of the long standing ties between the armed forces of the two countries.

The two leaders commended the conclusion of the Navy Implementing Arrangement Concerning Mutual Coordination, Logistics and Services Support in June 2018, which together with the Navy Bilateral Agreement concluded in November 2017, have expanded and deepened bilateral naval cooperation.

On this occasion, Dr Ng appreciated Prime Minister Narendra Modi’s Keynote Address at the 2018 Shangri-La Dialogue, wherein the Prime Minister articulated India’s vision for the Indo-Pacific region. In this regard, Singapore strongly supports India’s deep engagement with Association of South East Asian Nations (ASEAN) member states participation in patrols along the Straits of Malacca with Singapore and looks forward to a inaugural conduct of the trilateral maritime exercise with Thailand in the Andaman Sea.

Defence Minister Sitharaman affirmed India’s full support and active participation in the regional security architecture of the ASEAN Defence Ministers’ Meeting (ADMM)-Plus and its many initiatives. As an ADMM Plus member, India supports the adoption of the Guidelines for Air Military Encounters.

As littoral countries astride key Sea Lines of Communication (SLoC), the two leaders underscored the importance of maintaining freedom of navigation and overflight consistent with international law, including the United Nations Convention on the Law of the Sea.

Ms Sitharaman reaffirmed India’s belief that disputes should be resolved through peaceful means, and in accordance with the universally recognized principles of international law. Both Ministers agreed on the importance of international cooperation in tackling transnational security threats and in particular measures to collectively tackle the threat of terrorism.

The two leaders agreed to step up intelligence and information sharing, particularly in the areas of maritime security and counter terrorism and expand collaboration on submarine safety and rescue.

Dr Ng and Ms Sitharaman expressed satisfaction at the deepening defence ties between India and Singapore and reaffirmed their commitment to support further initiatives that would promote stability to the region. It was also agreed to hold the 4th DMD in Singapore next year on mutually convenient date.