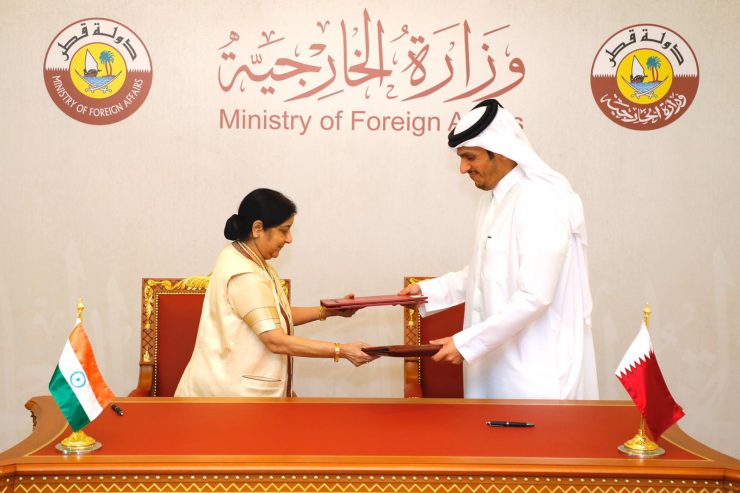 New Delhi. India and Qatar have signed a Declaration to establish Joint Commission at the level of External Affairs Minister and Foreign Minister respectively to periodically review progress in various cooperation initiatives. Both sides discussed the entire gamut of bilateral relations.

The Declaration was signed during External Affairs Minister (EAM) Sushma Swaraj’s visit to the State of Qatar from October 28 to 30. The visit was at the invitation of Deputy Prime Minister and Minister of Foreign Affairs of Qatar Sheikh Mohammed bin Abdulrahman Al Thani, who had earlier visited New Delhi in August 2017.

The EAM called on Sheikh Tamim Bin Hamad Al-Thani, Emir of the State of Qatar who fondly recalled his visit to New Delhi in March 2015 and expressed hope that bilateral relations will be further strengthened. Both sides took note of the visit of Prime Minister Narendra Modi to Doha in June 2016 and agreed to tap the immense potential that exists in bilateral trade and investment. The Emir highly appreciated the rich contribution made by the Indian community in the overall progress and development of Qatar.

During her visit to the Doha, Swaraj held delegation level talks with her counterpart Sheikh Mohammed bin Abdulrahman Al Thani. Indian side mentioned that bilateral trade between India and Qatar in 2017-18 was US$ 9.9 billion and Indian exports to Qatar during this period registered an increase of 87 per cent over the previous year. Qatari investments were invited in the areas including petrochemicals, infrastructure, agriculture and food processing. Both sides expressed satisfaction at the smooth functioning of various institutional mechanisms for strengthening of bilateral relationship.

In Doha, the EAM addressed and interacted with over 500 representatives of the Indian community. They highly appreciated the initiatives taken by the Government of India for the welfare of Indian community abroad. A booklet titled ‘Welcome to Qatar’, prepared by the Embassy for Indians coming to Qatar for employment, was released by the EAM at the event.

The visit provided an opportunity for a comprehensive review of the bilateral relations and take forward the decisions taken by the leadership of both the countries.