The Triangle of Volatility

The India-China-Pakistan strategic triangle is one of the most volatile and dangerous structure symbolised by disparate ideology yet mutually influencing relationship, deeply rooted and intertwined in historical contradictions. This triangle accounts for half the world’s population and has the discredit of largest warring militaries, disputed flashpoint borders, nuclear brinkmanship, a quest for competing strategic space and periodic confrontations creating strategic fragility.

I have simplified the strategic relationships and dynamic interplay through a triangular theory. The core triangle remains the India – China – Pakistan triangle. China as a dominant power occupies the apex of this triangle, with India and Pakistan, who occupy the opposing corners of the base. The Sino-Indian interface is competitive leading to rivalry with sparks of confrontation. The Sino-Pakistani interface is collusive with debt diplomacy making Pakistan a dependent pawn. The India-Pakistani interface is most fragile and oscillating both in war and peace.

Strategic behaviour on one leg often has an inter-relationship with the others. This volatile triangle and its geostrategic periphery also form the epicentre of global stability – instability paradox. Thus it bears the shadow of others overlapping triangles like US-India-China and China-India-Russia for the furtherance of their interests and personal agendas. Triangular conundrum among stakeholders is depicted below. All triangles have an interplay among themselves, some more pronounced and impactful, some less. 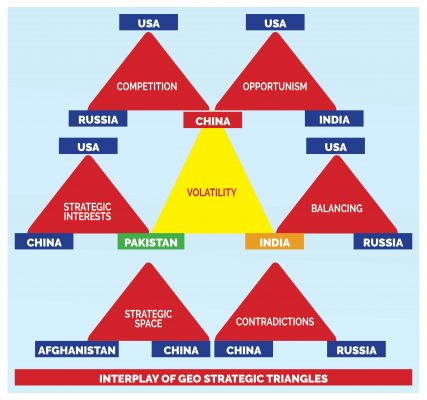 Strategic culture is an amalgam of political culture, religious ideology, deep-rooted values and beliefs, historic baggage of accumulated experiences, geography and its impact on international relations, military culture, economy and technology. However, no strategic culture is dynamic and ever-evolving and re-assessed across generations with events, compulsions and experiences.

India’s strategic culture is complex, yet composite, coherent and distinct by itself. The teachings of mythological epics like Ramayana and Mahabharata, values and education imbibed by ancient Hindu Vedic civilisations, statecraft with threads from Kautilya’s Arthashastra and braving over 200 years of repeated invasions from the time of Alexander the Great in the year 321 BC to the British, only reinforced the idea of India. The secular threads and unity of the nation stood firm and deeply engrained, never severed or completely submerged by repeated challenges to its survival.

India was indeed a strong nation, with a strong economy and a glorious culture with the power and strength of knowledge and character till corrupted and exploited by British rule. India’s strategic culture thus focuses on peace, stability and development, engrained on its secular and democratic character. Unlike China and Pakistan, India’s strategic culture does not have a bias for expansionist territorial aspirations, beyond those illegally occupied by the neighbourhood. Thus India stands distinct from the conflicting revisionist ideology and expansionist culture of its two neighbours viz Pakistan and China.

Pakistan’s strategic culture is foundational on three basic themes. One, the insecurity of being an incomplete state due to the unfair partition and inheritance. Two, perceiving India’s rise as a regional hegemon aimed to disintegrate Pakistan and undermine Islam as an ideology. Three, Afghanistan instability syndrome aided by a collusive threat by India. Thus Pakistan’s strategic culture is deeply rooted in its insecurity and revisionist ideology with the predominance of the military and mullah, as a state within a state.

Its strategic outlook is engrained through the lens of insecurity and revisionism, Kashmir obsession, Islamist political identity, nuclear brinkmanship and anti-India belligerence. It remains as the hotbed of terrorism which often boomerangs against the nation itself, making it the fifth most terrorist incident affected nation in the world as per the 2019 Global Terrorism Index. Thus, it continues as a fragile rentier economy with poor development index, due to its disruptive strategies. It plays the convenient pawn to China encouraging its risk-taking behaviour as a nation adding to regional instability.

Relations with China while being managed from competition to cooperation politically, the gap between military aggressive posturing and confrontation to a conflict will have to be plugged by astute and agile diplomacy till the desired strategic security equilibrium and symmetry is in place

Chinese strategic culture and history, on the other hand, has several distinctive characters and varied narratives. China thus perceives itself not as a nation-state but rather a “state of civilization”. As a state it reflects inward-looking cloaked defensive behaviour, externally it professes the expansionist doctrine of foreign policy, militarily it focuses on power for strategic coercion, economically it creates global dependencies and strategically it aims at regional and global dominance.

The Clash of Cultures and Security Dynamics

India’s geopolitical options and threat environment were profoundly altered by an Islamist and fragile revisionist strategic culture of Pakistan and the expansionist “salami-slicing” ideology of a hegemonic China. Their collusive behaviour adds another dimension. Ironically, all three focus their security energies on the wrong strategic front. Pakistan primary threat is internal front and Afghanistan yet it focuses on India; India primary threat is China yet it focuses on Pakistan, and China’s primary threat is the USA and the seas, yet it stirs confrontation with India on the Himalayas.

Ironically even in political behaviour, in one the military calls the shot, in the second majoritarian politics and close core group led leadership, and in the third a central communist party leadership all-powerful and all-pervasive. However, the more dangerous common threads of strategic instability woven in the past in some cases and a recent phenomenon in some are the militarisation of foreign policy and politicisation of military and diplomacy. Thus strategic volatility is inherent.

In the context of Indo-Pak clash of cultures, turbulent disputed borders and Kashmir obsession fuels its proxy war under the solace of a nuclear umbrella. Kashmir remains a central agenda to its narrative and survival of the state, mullah and military. However, the larger remains the insecurity rising from its perception of India as a Hindu hegemon against Islam. This fuels its Islamic card and stirring passion to stir terrorism.

Thus, India needs to take a cue from the Israeli strategy of “mowing the lawn”, with periodic assured kinetic retribution, as part of punitive deterrence, to ensure the cost of waging Proxy war for Pakistan is made prohibitive. The asymmetric conventional edge must continue to add teeth to the punitive deterrence.

In the Indo-China context, China presents a multifaceted primary challenge to India manifesting now. China not settling the boundary dispute with India, holding it as domicile’s sword, leaves no doubt that undercurrents of its aggressive designs remain embedded. China sees India as not only a regional competitor but a major geostrategic player in the Indo-Pacific and a global anchor meant to contain its rise. Thus, dealing with China’s coercion and expansionism has always remained one of India’s biggest foreign policy challenges, with comparative asymmetry in economic and military capabilities between the two Asian giants.

Relations with China while being managed from competition to cooperation politically, the gap between military aggressive posturing and confrontation to a conflict will have to be plugged by astute and agile diplomacy till the desired strategic security equilibrium and symmetry is in place. China’s periodic forays in peacetime by way of transgression will thus have to be denied any psychological gains with due credible military deterrence and astute political decisiveness to preserve its core national interests. This would be an important aspect of strategic messaging and desired end state in itself for India. This requires collaborative military, economic, informational, diplomatic and political levers to deter China’s revisionist culture and expansionist designs in the Himalayas.

The only stability in the triangle will be the Pakistan – China relationship. Pakistan-China bonhomie is here to stay and likely to be strengthened. The relationship is more vital for China for its strategic interests. Pakistan draws its strength from this relationship to address its vulnerabilities and economic fragility. The common agenda remains to stymie the rise of India. Thus collusive bonding will remain a dominant factor in this triangle.

India has to build up deterrence capabilities based not only comprehensive national power but comprehensive “Atmanirbhar” national capacity. Strategic autonomy must be the rightful destination.

The more dangerous Sino-Indian relationship as seen in the recent years is likely to be competitive than cooperative often giving sparks for a possible flare-up to a confrontation. The disputed border (LAC) is likely to remain volatile and unresolved. The Indo-Pakistan relationship is less dangerous yet more fragile with Pakistan’s instability, mutual distrust and revisionist culture. Thus uneasy calm with periodic retribution dynamics is likely to remain with an active LoC and changing flavours of proxy war. Limited wars single front with collusive signalling or two fronts under a nuclear umbrella remains a reality. The individual national interest agenda’s of external powers will also unfold along with the price of their opportunist placards. Instability in Afghanistan post-USA withdrawal, Iran dynamics and balancing the two strategic triangles of India-China-USA and India-China-Russia will have their own strategic dynamics and fallouts. Thus this triangle’s security, political, and economic foundations face stresses that could reshape political and economic relations globally. India has to build up deterrence capabilities based not only comprehensive national power but comprehensive “Atmanirbhar” national capacity. Strategic autonomy must be the rightful destination.

There is a need to pragmatically envision the future threats and challenges emanating from the volatility of this India-China-Pakistan strategic triangle. Volatility, uncertainty, complexity and ambiguity will define their state, with all-season China-Pak nexus inherent in it. However, contradictions, regional hegemony and potential confrontations must be solved through a formula of symbiotic realism finding space for cooperative mechanisms based on mutual trust, peace and tranquility and shared growth. This remains a challenge for the region. In the meantime, the wise must learn from history and ensure peace by addressing their vulnerabilities, capability voids and preparing for the worst. India would do well to engage with its neighbours for lasting peace yet be fully prepared for a turbulent present and an even more turbulent future. -The writer has had an illustrious career spanning nearly four decades. A distinguished Armoured Corps officer, he has served in various prestigious staff and command appointments including Commander Independent Armoured Brigade, ADG PP, GOC Armoured Division and GOC Strike 1. The officer retired as DG Mechanised Forces in December 2017 and was Consultant MoD/OFB from 2018 to 2020. The Officer is a reputed defence analyst, a motivational speaker and prolific writer on matters military, defence technology and national security. The views expressed are personal and do not necessarily reflect the views of Raksha Anirveda