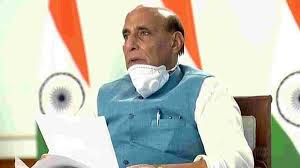 New Delhi. Defence Minister Rajnath Singh on July 10 did a comprehensive review of the situation in eastern Ladakh with top military brass in view of the withdrawal of troops from the friction points by China’s Peoples Liberation Army (PLA), government sources said.

Gen Naravane gave a detailed account of the implementation of the first phase of mutual disengagement of troops from Galwan Valley, Gogra, Hot Springs and Finger 4 areas in Pangong Tso, the sources said.

They said the Army Chief apprised Singh about combat readiness of the Indian Army in the region to deal with any eventualities and presented a detailed update of situation in all the sensitive areas along the Line of Actual Control in eastern Ladakh as well as in Arunachal Pradesh, Uttarakhand and Sikkim.

As the first phase of the disengagement is nearing completion, government sources said the two sides are set to hold a fourth round of corps commander-level dialogue by early next week to finalise modalities for de-induction of troops amassed by both sides in their rear bases along the LAC, the de-facto border between the two countries.

Both sides have completed creation of a buffer zone of three kilometres in the three friction points of Galwan Valley, Gogra and Hot Springs as part of a temporary measure, they said, adding there has been thinning out of troops from Finger 4 area in Pangong Tso as well.

The disengagement of troops from the friction points formally kicked off on July 5 following eight weeks of eyeball-to-eyeball confrontation between the two armies at multiple locations in eastern Ladakh.

The Indian and Chinese armies were locked in a bitter standoff in multiple locations in eastern Ladakh for the last eight weeks. The tension escalated manifold after a violent clash in Galwan Valley in which 20 Indian Army personnel were killed.

Both sides have held several rounds of diplomatic and military talks in the last few weeks to ease tension in the region.