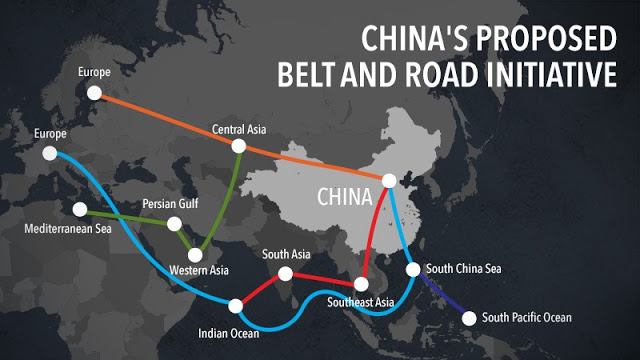 The second BRI Forum was recently held at Beijing (25-27 Apr 2019). In the first Forum, grandiose plans were announced and BRI took off like a tornado and suffered hiccups. Countries became wary of Chinese debt trap diplomacy and started reviewing their commitments with China. In the second forum, a chastened China had to reassure the participants that BRI would be more transparent and corruption free. However, it was still all about how to further Chinese economic and geopolitical dominance. India very rightly refused to participate in it since CPEC, the flagship of BRI, does not take into concern our sovereignty issues and is inimical to India’s interests.

The Chinese reaction to our non-participation was multi-faceted. In public it stated that it understood our compulsions at non participation and that instead there will be a one on one meet as a follow up on Wuhan. It sounded conciliatory. In the same breath it also stated publicly that CPEC did not violate Indian sovereignty. It also put up a map in the Forum where Arunachal Pradesh and part of J&K were shown as Chinese territory. It also showed India being part of BRI. Also, their official media commented very adversely on the Indian Navy and its capabilities after the small fire accident on INS Vikramaditya. This despite India being among, the handful of nations to send ships to participate in a Chinese Naval Parade which preceded the BRI forum. The Strategic, Diplomatic and Political signalling was very clearly that of an adversary. This attitude will be compounded by the fact that it was forced to accept the UN designation of Masood Azhar as a global terrorist. At another level, China, very ingeniously, invited our businessmen through various channels to participate in side conferences, of the BRI Forum so that they can continue to milk our markets. Businessmen being businessmen will follow the smell of money and conclude deals to import cheap and poor-quality Chinese goods. However, articles have appeared in our media which bemoan lost business opportunities due to this boycott. Some have gone on to suggest that India should join the BRI, forthwith. Some of these authors need to have their heads e xamined. A major Chinese onslaught is in the offing and we should be prepared for it.

We, as a nation should be clear. China is our adversary No1 and will be our frenemy for ever – neither friend nor enemy and vice versa. While keeping up the hostility on one level, it will entice us to open our markets further and convince us to be part of BRI. The onslaught is going to only gain further momentum during the proposed one on one summit with the new government. After that Chinese goods will further swamp our markets creating huge trade deficits and unnecessary dependencies. Then we will keep crying hoarse that trade deficit is widening with China. This issue will flare up whenever there is a crisis with China. Strategists and economists will pop and argue in our supercharged media that we need to use our huge market strategically to counter Chinese designs. The crisis will get over. Everything will be forgotten, and the economic bloodletting of India by the Chinese will continue. Forget the military and strategic aspects of this game, isn’t it time we do something concrete about the trade imbalance? So, let us see what our options are to leverage our markets by playing smart. I will concede at the outset that some of the options would sound gauche and impractical to a trained economist. But then I would like to look at these as an adjunct to military options which will then become good bargaining chips.

To correct this imbalance, the first step is to create a nationalistic awareness and outlook to rethink buying anything Chinese. A decade back a group of officers and ladies were on a holiday and shopping in Namdaemun Market in Seoul. It is Seoul’s Sarojini Market. The ladies were busy shopping for fancy items. As per Indian custom, they got down to bargaining in a small item shop. The sales girl, fed up of bargaining at one point, showed to all the ladies two identical pieces of a hair clip. One, very proudly, she said was Korean, high quality, would last for a year at least and was for two dollars. The other, with derision, was Chinese, of inferior quality, would last a month or so and for a dollar. All ladies picked up Korean stuff for the rest of the trip. It was a great lesson in nationalism by a Korean sales girl. Indian small scale and traditional industry must be revived and sustained to compete qualitatively with the Chinese onslaught. A nationalistic “Jan Jagaran” campaign highlighting fake cheapness of a Chinese item vis a vis Quality Indian product should be started and sustained. What about themes like Be Indian Buy Indian? Beyond a point Indians are not fools to buy cheap and fake Chinese stuff if there are better alternatives. The Indian nationalistic voice must be heard in Beijing not on our political platforms alone. It must be clear – Chinese goods are not welcome in India if it continues to be a frenemy. NGOs and societal organisations have a role to play in this.

Also, there are issues related to standards. It is well known that Chinese goods exported to other developed countries have much higher standards than what are dumped here. There is dire need to correct this situation.Mechanisms should be put in place to ensure that Chinese goods adhere to laid down standards before entering Indian markets.

Besides this, there must be policy initiatives to convert “Made in China” into “Made in India”. Let us take an example. Sony TVs are made in China. However, they are sold like hot cakes in India and lapped up. Why not have a policy, wherein after a time window and a cost cum number limit, Sony TVs sold in India must be Made in India or face exorbitant duties? Extend it to all FMCG items. The impact will be huge. Take up the issue with the Japanese, Koreans, Europeans and other OEMs. Not needed with Chinese. Force others to set up shop here or make it costly for them. In any case the ground is ripe for it. Already there are reports that many companies want to quit China and relocate. How about enticing those countries and companies to set up shop here? How about having country specific enclaves like the Japanese one near Alwar?

If Chinese want to sell their services or products here or want to set up shop here, we must enforce the principle of offsetting used in defense contracts. It can be widened to all other goods also. 30% offsets are the standard for all global defense contracts beyond a laid down value. In infrastructure projects it can go up to 50% easily. In addition, 80% of manpower costs should be on hiring locally. Which means that any outsider getting a contract here must plough back into the system. These simple steps will go a long way in addressing a lot of imbalances with China. Play smart. Leverage domestic consumption.

China is getting into AI and 5G technologies and other disruptive technologies in a rapid manner. Its cyber invasion is quite pervasive. A special program must commence to reverse the tide. Very importantly, manufacture of electronic hardware in India must commence at a national level. International players must be incentivised to set up shop here. This is very important where there is even an element of cyber security risk to our public networks which are blooming as never before. Digital India cannot function from a Chinese platform where our data is being siphoned off, processed and being turned against us.

There is a small but significant step which the new government can enforce. Control the import of Chinese goods from entering India though other routes and from neighboring countries. Also, devise a system to detect masking of invoices, under invoicing/ under valuation and other such practices which are quite routine in inbound traffic from China. If we are serious about it we can make a difference.

One can argue on feasibility and practicality of executing such options. Fine. Suggest some other. In this era of protectionism and isolation many more can be thought of. China should get the message that our markets will only open if there are strategic concessions. Besides, also one might argue that we will ruffle feathers. So, what if? Did the Chinese ask us for permission before peddling nuclear technology to Pakistan or declaring that CPEC will go through disputed territory? We need to do what is in our national interest. We need to be smart and we need to be firm. We need to ensure that the playground for Chinese is as level as they have made it for us. Alternately, they must allow unfettered access to Chinese markets so that a level playing field emerges. The new government must have some steel in it and show it too.

Got this interesting feed back from a knowledgeable person

Couldn’t agree more sir . The matter is extremely serious and requires urgent and strong measures . We need to take all possible steps on a war footing We should go to the extent of creating a organization in government dealing only with Chinese imports and business practice . Today almost all global brands are manufactures in China and exported to rest of the world . I ordered tennis ball cartons from a well known store in UK through e channel , the goods were shipped from Germany from a warehouse maintained by Chinese manufacturer of global
Brand ( US OPen and Head tennis balls).

We must force all the global brands like Adidas , and you have listed many to manufacture the goods in India . Sun Txu says

If your enemy is secure at all points, be prepared for him. If your opponent is temperamental, seek to irritate him. Attack him where he is unprepared,
The supreme art of war is to subdue the enemy without fighting.
Supreme excellence consists of breaking the enemy’s resistance without fighting

Problem statements
Our business folks are not going to listen
Solution sir
India must immediately ; HOLD and DELAY every single consignment coming from China in the customs , impose demurrage charges on importers so that their costs go up . Launch swadeshi aandolan and take steps you have listed .Recently their e-commerce platforms have become very active and circumvent our customs by sending goods as gifts . They will go to any extent to make profit .

There are low hanging fruits . Give tax free status to Taiwanese investors for specific projects and import substitution of things like API ( active pharmaceutical ingredients) must be taken up immediately . Just ban the import if this stuff because it’s strategic . Close economic and military cooperation with Vietnam and such friendly countries ( currently not good enough ) .we should promote unrest in places and countries where China is entrenched. Disrupt their supply chain particularly raw materials . Defame them within India. In short all out covert and overt steps must be launched . Thanks for bringing this up sir .