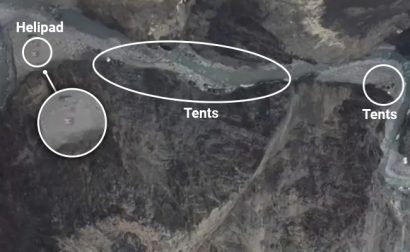 New Delhi. The new satellite images aired on July 7 night by China on state-run television do India the service of establishing its claim – that Chinese troops tried to prevent Indian soldiers from legitimate activity on India’s side of the border in the Galwan Valley region as early as May, a full month before deadly clashes – at the same spot – which saw 20 Indian soldiers killed in the line of duty.

China on July 7, began withdrawing its troops from three spots in Ladakh that have hosted massive border tension since early May.

A programme on CCTV-4, the Chinese state broadcaster, ran satellite images last night which, it said, pick up an Indian helicopter pad and camps on the Galwan River at Patrol Point 14, located at a height of about 14,000 feet above sea level in the Western Himalayas. A senior Indian army officer said “the authenticity of the images (on Chinese television) will have to be verified.” He cannot be named on account of military rules.

On June 15, Chinese forces crossed into Indian territory, triggering a huge pushback from Indian troops in a hand-to-hand assault. While India confirmed the loss of 20 soldiers, China has not offered information on its casualties. Indian army sources put the number at 45.

The images which aired in China last night are not dated and point to the concentrated presence of Indian soldiers at Patrol Point 14 as also a newly-constructed helipad – all on the Indian side of the Line of Actual Control.

This indicates that the Indian construction and soldiers were pushed back by the Chinese on Delhi’s side of the disputed border. Subsequent images from the days after show a sizeable Chinese presence here with debris visible on June 16, a day after the deadly clashes between soldiers. Satellite images from June 25 show significant Chinese construction activity at the river-bend.

The river-bend is of great tactical importance as it allows soldiers to look at the military build-up by the opposite side along the banks of the river. India has always argued that the embankment along the Galwan River is clearly its territory, all the way upto Patrol Point 14.

Last month, while commenting on the border hostility, the Foreign Ministry referred to a clash between India and China at Galwan that had taken place in May, much before the deadly assault with iron rods and nail-studded batons on June 15. “In early May, the Chinese side had taken action to hinder India’s normal, traditional patrolling pattern in the Galwan Valley area,” said Anurag Srivastava, the ministry spokesperson. If the new images aired on Chinese television are authentic, they prove that Chinese troops attempted a clearing out of Indian activity which is why the troops and helipad are missing from later images.

On July 7, India and China began disengaging in this part of Eastern Ladakh, a cooling off that resulted after a two-hour-long negotiation by phone on July five between National Security Advisor Ajit Doval and China’s Foreign Minister Wang Yi.

China’s aggression at the border in Ladakh is reportedly triggered by India’s changes to improve infrastructure including the construction of new roads to make travel for its soldiers easier.

On July 7, both sides thinned out their men in the Galwan, Hot Springs and Gogra areas by creating a “buffer” or no-man’s land between the two forces. However, there has been no significant change to Chinese positions in areas at the Pangong Lake which India holds as its own; nearly 190 Chinese structures including tents and accommodation have been set up in areas where the Indian Army used to patrol according to a mutual agreements.