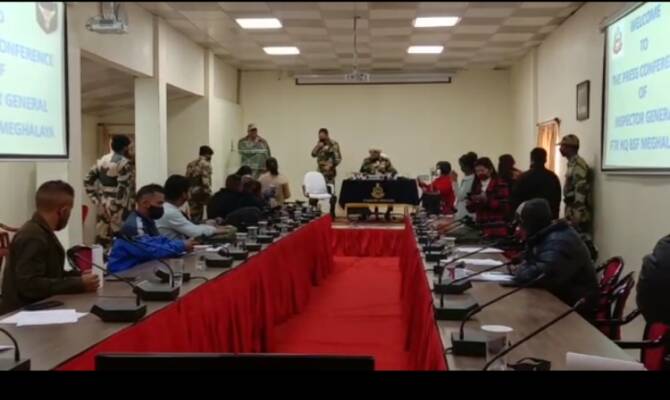 Shillong. The year 2020 was a year of turbulence for everyone; a challenging time for civilians and Armed Forces as well. Ranging from combating pandemic to curbing illegal border activities, Border Security Force Meghalaya Frontier has tremendously seized the smuggling goods at Indo-Bangladesh border and nabbed the illegal entrants. Not only this, they have left no stone unturned in completing the plenty of works under Border Development programme and always ahead in assisting the civil population at the border areas.

There were times when Border Security Force faced difficulties while performing duties due to certain reasons, however, they didn’t turn back and marched towards the border peace and prosperity. In a wider context, it can be said that BSF Meghalaya Frontier have shown the mighty power and determination to set the border free from all kinds of illegal and criminal activities and wave the harmony in the region.

Towards this end, BSF Meghalaya organised a high-level press conference at BSF Shillong HQ on January 8. Opening up the press conference BSF PRO Umesh Kumar Nayal said, “Previous year has been quite challenging for us. We had to fight at two fronts – one for keeping the border crime free and peaceful and other at fighting the pandemic. The time was a challenging scenario for us. Our selfless service towards the nation shall be continuing and we will keep doing our jobs no matter at what cost.” 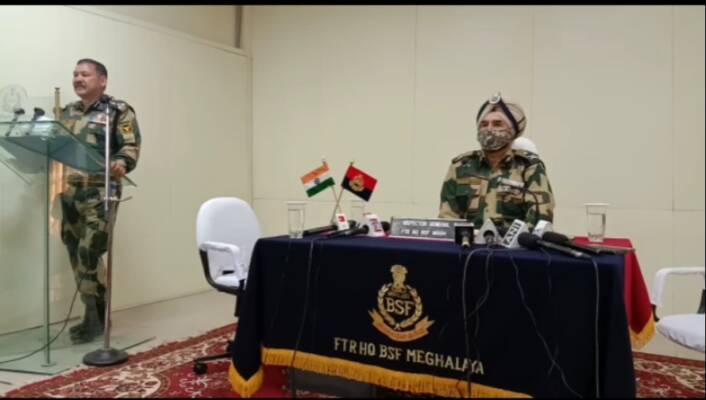 The area under the Meghalaya frontier is prone to the smuggling of livestock and drugs, as well as a variety of narcotics items. In such a scenario, these contraband seizures put a big boulder in the tunnel of smugglers zone who freely try to penetrate the Indian territory without a second thought. The BSF IG also told the media that “they have seized around 10,000 heads of cattle which were smuggled to Bangladesh, and the 300 are still in their custody. The smuggling of goods especially cattle were again on the rise as soon as the lockdown was lifted, and inter-state movement of vehicles was allowed.”

On questioning over the strategies to tackle the border crime and smuggling activities, Singh informed to this Defence Correspondent “we have taken various initiatives in order to curb the border crime activities and therefore our vigilant troops are deployed at the Indo Bangladesh border with surveillance equipment to nab the miscreants.

On the other hand based on the intelligence inputs, “Our soldiers are always on alert to apprehend the illegal miscreants’ day and night. We are having a high number of night patrolling at the border and we are on control at the border and there is no panic situation with regard to any tans-border crimes.”

Further speaking to this Defence Correspondent, he said one of the causes of smuggling activities taking place in border areas is partially unfenced, few unlit hilly terrains. At present we have completed around 70 per cent of 443-kilometre border fencing that Meghalaya shares with Bangladesh.

“We have issued an order to the construction agencies to expedite the construction in the areas which are yet to be fenced. There are some soft patches which they would require to take clearance from the Bangladesh Government. I hope that the whole border will be fenced very soon,” Singh said.

He further told to media that “we had also raised the issue concerning a demand to build the fencing from the zero line in 13 selected areas with the Deputy Commissioners and Chief Secretary of Meghalaya.

On enquiring about the Border Management plans with Bangladesh Border Guards, Singh said to the Correspondent: “We organise meetings at different levels time to time, like DG level talks, Nodal Officer meeting or Sector Commander level meeting to keep the border peaceful and curb trans-border crimes.

Under coordinated Border management we plan and conduct several joint patrolling carried out by both forces. Although there are some instances pertaining to injuries or firing on border area of some groups to derail the peaceful relations with our counterparts. But both the forces are mature enough to see through the nefarious tricks of those ill motivated groups.”

Denying on the allegations that BSF has killed one Bangladesh national, Singh informed the mediapersons, “We have no role to play in this incident as he was killed by his own Bangladesh Border Guards. However, we raised a strong protest against one of our Indian nationals killed by BGB and we have asked for further investigation in this matter as how he was killed.”

Addressing the press conference, the BSF Inspector General stated that a total of 27 companies of Meghalaya Frontier were deployed in various states to maintain law and order in the year 2020 with an aim to provide a peaceful environment. 20 companies of BSF Meghalaya are credited with conducting peaceful polling in Bihar assembly elections. Our four companies are still deployed in Meghalaya to help the civil administration.”

In addition to this, during the year 2019-2020 a total of Rs 81 lakhs was allotted for the works under civic action programme. Out of which 99 per cent has been spent on various social works like distribution of school gadgets, water cisterns, sports items, solar equipment etc. to help the border populace and improve their livelihood. “We also provide skill development programme at the border with the help of different agencies. We have also adopted few villages where they were deprived of mere survival and henceforth we have been aiding those villages.” 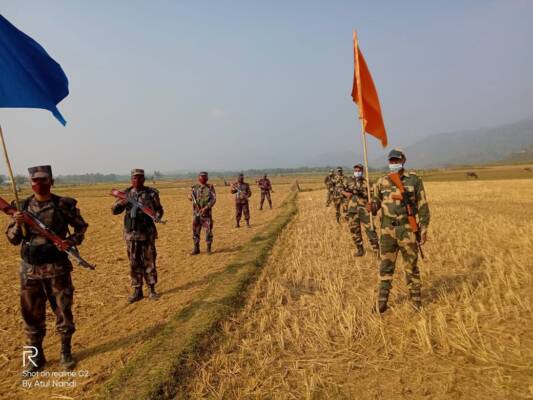 “Despite the challenges this year we performed our duties with sincerity and determination, with the vision of creating peaceful and crime-free border. Throughout the year 2020 when the civil population was clutched in pandemic, we distributed free rations in the interiors, zero-line villages at the border and other parts when civil population were in need of us,” Singh said.

“We also organised medical camps time to time under the supervision of BSF veteran doctors in which more than thousand villagers were medically examined and provided medical assistance. A special tree plantation drives were carried out during 2020 in which almost 10 thousand saplings were planted in various border including Shillong HQ.
In his final comment, the BSF IG stated: “Our BSF troops are ready to perform the various duties with the aim of creating peaceful border. A peaceful border is must for the development of nation. We have marked the number of targets to be fulfilled with the same amount of energy and get accomplished. At the same time, we are always in constant touch with Bangladesh Guard Forces and continue to have good relations with them.”

-The writer is a Meghalaya-based Defence Journalist