“Artillery adds dignity, to what would otherwise be an ugly brawl” Brief History. Mechanical systems used for throwing ammunition in ancient warfare, also known as “engines of war”, like the catapult, onager, trebuchet, and ballista, were referred to by military historians as artillery. The vase shaped Chinese artillery which includes long range cannon dated back year 1350 and was extensively used by the Ming Dynasty in the 14th Century. Indian artillery takes its lineage from Moghul Emperor Babur who is popularly credited with introduction of Artillery in India, during the Battle of Panipat in 1526. Regiment of Artillery in India was raised on September 28, 1827 with the raising of Bombay Artillery which was later renamed as 5 Bombay Mountain Battery. This day is celebrated by the Regiment of Artillery as the “Gunners Day”.

The First and Second World War gave Indian Artillery an opportunity to fight in East Africa, Gallipoli, Mesopotamia, Palestine, East and North Africa, West Asia and Burma (Now Myanmar). The Indian Artillery has proved itself time and again since Independence playing a pivotal role in all operations, the recent one being the Kargil war, wherein the gunners rose to new heights of courage and professionalism. 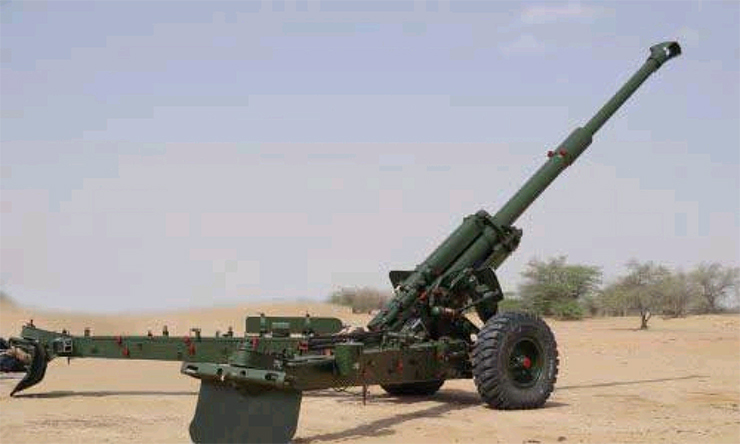 From its original status as a “Supporting Arm,” whose firepower neutralised large areas of ground with dispersion that was inherent in its functioning, artillery now has graduated to a full-fledged combat arm that dominates the battlefield with its accurate firepower that causes physical destruction and psychological dislocation

With the motto ‘Sarvatra Izzat-O-Iqbal – Everywhere with Honour and Glory’, the second largest arm of the Indian Armed forces have a distinguished record with a huge haul of gallantry medals in pre and post Independent India. Having spent these glorious years with Guns as its colours and the ammunition as its weapon it is aptly referred to as ‘God of War.’

Role of Regiment of Artillery

Today, the Artillery of Indian Army consists of a dynamic inventory which ranges from Ballistic Missile, Multi-Barrel Rocket Launchers (MBRL), High Mobility Guns, Mortars Precision Guided Munitions (PGMs) for destruction of enemy targets to Radars, UAVs and Electro optic devices for locating and carrying out Post Strike Damage Assessment (PSDA). The importance of the artillery in conventional warfare remains intact, especially with the artillery guns playing a major role in the ‘Integrated battle groups’. These battle groups are formations comprising of artillery, mechanised infantry, armoured and infantry elements along with the modern-day force multipliers like UAVs and electronic warfare systems. While artillery fire can be used for suppressive and destructive purposes to get an upper hand over the enemy, the role of modern artillery is to prevent conflict through deterrence and if it breaks out, to break the cohesion of the adversary by destroying its war waging machinery and ultimately his will to fight. From its original status as a “Supporting Arm,” whose firepower neutralised large areas of ground with dispersion that was inherent in its functioning, artillery now has graduated to a full-fledged combat arm that dominates the battlefield with its accurate firepower that causes physical destruction and psychological dislocation. In the integration and concurrent application of all firepower resources, artillery not only plays a decisive role but also acts as the coordinating agency for the employment of resources to strike hard and deep into the enemy territory.

In the integration and concurrent application of all firepower resources, artillery not only plays a decisive role but also acts as the coordinating agency for the employment of resources to strike hard and deep into the enemy territory

Another important role of artillery is acquisition of intelligence and conduct of Post Strike Damage Assessment (PSDA). PSDA is the concept of assessing the residual potential of the target after carrying out a successful strike of the target in order to engage it again if required with the desired weapon system depending upon the recoverability and residual potential of the target. The PSDA task involves an array of agencies and equipment. The primary means of gathering the data are the surveillance sensors which include satellites, UAVs, Electro-Optic devices, radars etc. which are inherent to the Regiment of Artillery, thus making it a force to reckon with various operations of war.

Future of Regiment of Artillery 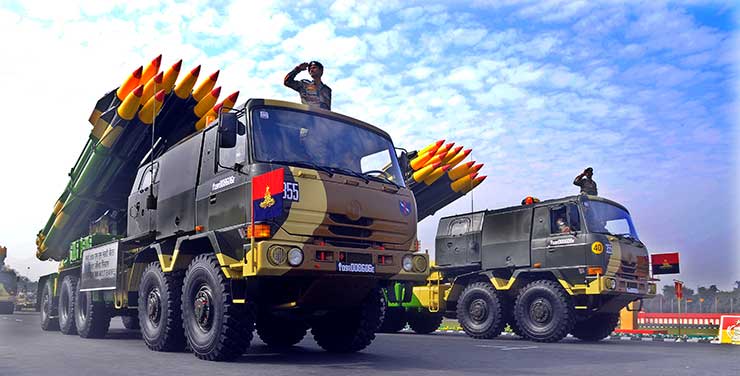 Future warfare will involve combination of kinetic and non-kinetic means. Traditional military power will be employed alongside technology-based influence, cyber and electromagnetic devices to target both military and civilian assets. The future battlefield will be concurrently contested in multiple layers including space, cyber, air, sea and land. In the backdrop of hybrid threat, the future wars will be characterized by:-

In such a battle arena, artillery will be an important instrument and enabler of non-contact battles, deep and precise fires and battle field transparency. To achieve this, certain attributes as given below will be pre-requisite for artillery: –

Indian Artillery has been meticulously planning and systematically preparing to transform itself into an arm of decision. The plans for transformation of artillery is well thought out and spread over almost the next two decades. Keeping in sync with the requirement of longer reach in the future battlefields and to reduce logistics burdens, Indian Artillery has undertaken the mediumisation programme in order to achieve the capability to fire deep and cause heavy destruction.

Around 30 years after the acquisition of the Bofors guns in 1980s, the new modernisation plans involve acquisition of 3,000 plus medium guns by 2025 at an estimated cost of eight billion dollars. This includes self-propelled and tracked K9 Vajra a 155 mm (45 calibres) gun being indigenously produced by Larsen & Turbo (L & T) under license with Hanwha Defence of South Korea. 10 pieces of the gun were bought from South Korea and 100 pieces are being produced by L & T on transfer of technology basis. Dhanush gun system is again a major step in modernisation of Indian Army. Dhanush gun system is a 155 mm/ 45 calibre towed gun system being produced by Ordinance Factory Board (OFB) and is able to achieve a range of 38 Km. 114 units of Dhanush will be handed over to Indian Army by 2023. The next platform being inducted is the 145 units of towed 155mm M-777 Ultra Light Howitzers under foreign military sales programme from United States which can achieve a range up to 40 km with excalibur ammunition. M-777 gun is made up of titanium alloy and hence light in weight and can be easily transported by air. 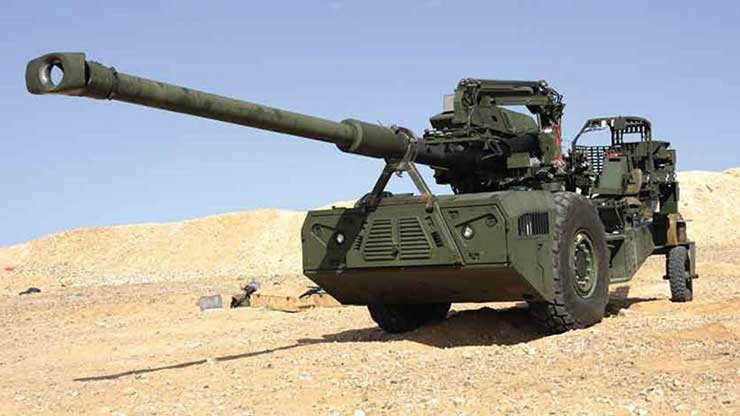 Another new induction in Indian Army is 155 mm/ 52 calibre Advanced Towed Artillery Gun System (ATAGS) being developed jointly by DRDO, Bharat Forge and TATA group which can achieve a range of 40 km. Indian Artillery has also undertaken a major project named Sharang, under which OFB is up-gunning 130 mm M-46 guns to 155 mm/45 calibre which will increase the present range of 27 km to 36 km and thus more damage potential at the target end. Indian Army is also planning to buy ATHOS gun system made by Elbit, Israel. It is a 155mm gun system capable of self-manoeuvre, fully automatic, long range with on-board tactical computers and inertial navigation system. Indian Artillery is also in the final stages of inducting the 214 mm Extended Range Pinaka Rockets of 60 km being developed indigenously by DRDO which will supplement the 300 mm BM-30 Smerch MBRL system having a range of 90 km. The greatest breakthrough has been in the field of Supersonic cruise missile BrahMos with ranges up to 400 km being inducted in the artillery which are apt for their employment in plains as well as mountains. It is imperative that artillery modernisation is undertaken with alacrity so as to generate both qualitative and quantitative fire power asymmetries to achieve unassailable dominance over the future battlefield.

As a fighting arm, that straddles the operational scenario from tactical to the strategic levels and as an arm that holds the bulk of the Indian Army’s surveillance and target acquisition equipment, the Regiment of Artillery is a force to reckon with – a force that will contribute extensively to guiding the manner in which the next war will be executed and how victory will be measured.

-The writer is a PhD scholar (Nuclear Doctrine), and retired as Chief of Staff from a Corps in Desert sector. The views expressed are personal and do not necessarily reflect the views of Raksha Anirveda