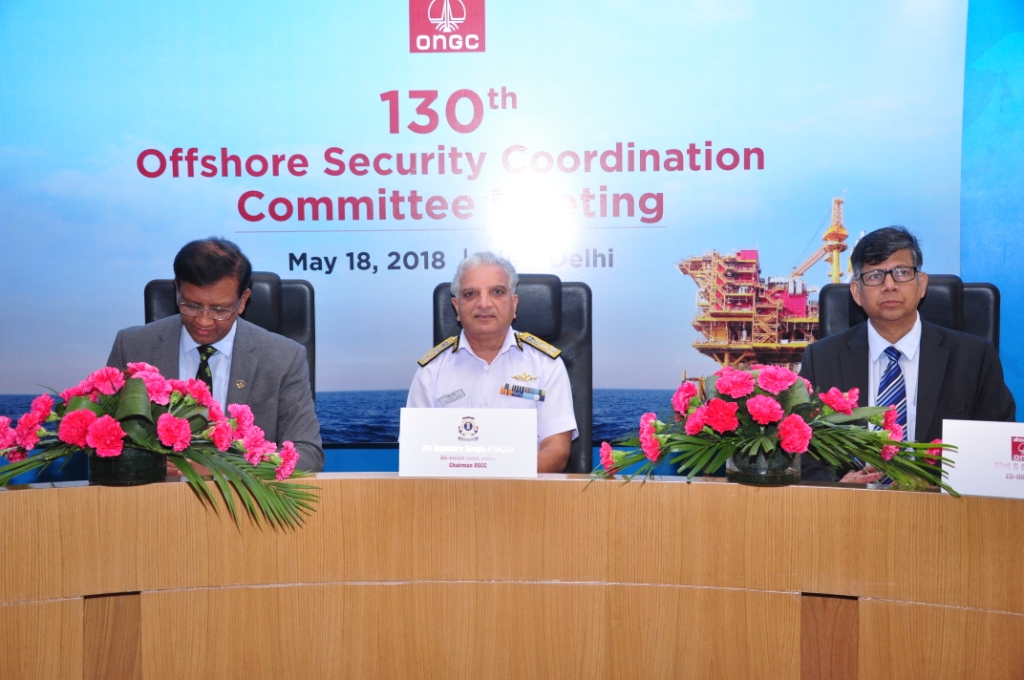 New Delhi, May 18, 2018: The 130th meeting of the Offshore Security Co-ordination Committee (OSCC) was held at ONGC Corporate Office Urja Bhawan, New Delhi on May 18, 2018, under the Chairmanship of DG Rajendra Singh, PTM, TM, Director General Indian Coast Guard, to review the preparedness and effectiveness of the security of India’s offshore installations.

Addressing the meeting, DG Rajendra Singh, PTM, TM, DGICG, Chairman of OSCC acknowledged the bold reforms in the energy sector such as National Data Repository (NDR), Open Acreage Licensing (OAL) under the Hydrocarbon Exploration and Licensing Policy (HELP) and the recently concluded Discovered Small Fields (DSF) Bid Round. He further added that in one of the largest offering of acreages, it was for the first time in India, 55 bidder selected blocks, each carved out by prospective bidders themselves in promising basins with an area of 59,282 Sq. KMs were announced for bidding. The Chairman also highlighted the implications of these reforms on maritime traffic and the need for a more robust offshore security.

The Chairman discussed issues related to Offshore security and expressed satisfaction over progress of Online submission of documents for security clearance, establishment of the VATMS (Vessel Air Traffic Management System), Community Interaction Programmes with fishermen and the increased cooperation between security and maritime agencies. He also highlighted the prompt and coordinated efforts of all agencies to Indian Coast Guard’s call in responding to a massive fire onboard MT Genessa carrying 30092 Metric tonnes of diesel off Kandla anchorage which prevented oil spillage and damage to marine ecology of the Gulf of Kutchch. Underlining the need of coordination, he appreciated the response by the Indian Coast Guard and other agencies in responding to a major fire onboard Maersk Container vessel engulfed in fire around 370 Nautical Miles from Agatti Island in Lakshadweep. 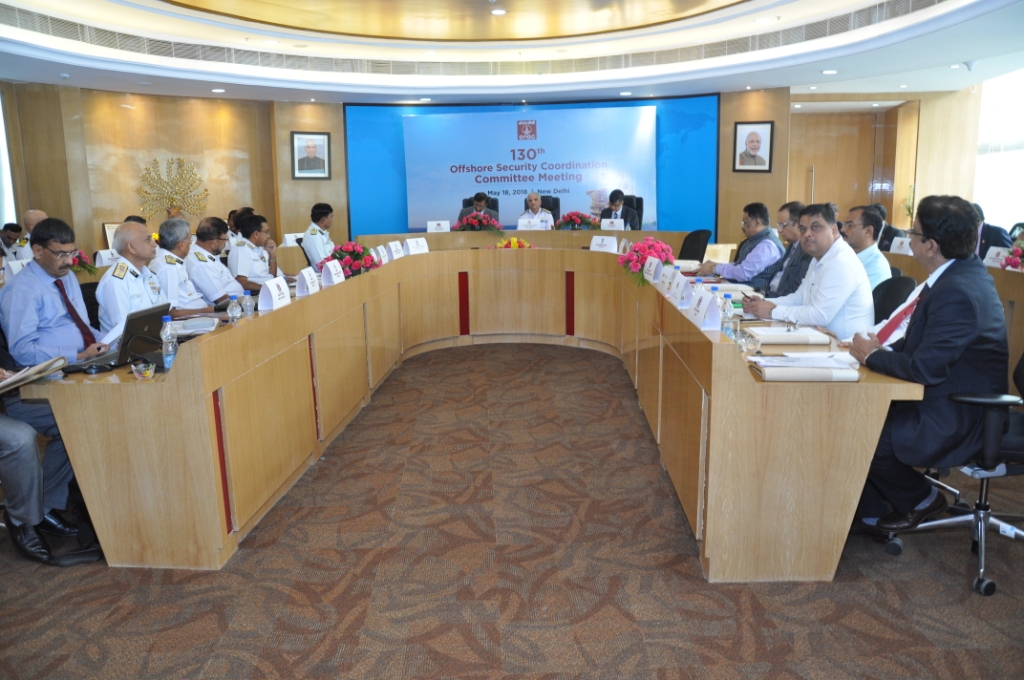 The Chairman emphasized that thinking of economic progress alongwith safety and security concerns will open the path to new synergies and contribute to a safe and sustainable development. While urging all agencies to brace up for monsoon, he re-iterated the importance of pre-emptive surveillance as the mainstay to achieve offshore security of our vast maritime domain. Giving a mantra of Offshore Security through Coordination and Cooperation, he urged members to continue reviewing, evolving and improving security apparatus through critical evaluation of existing practices and ingraining security consciousness into the work culture.

The OSCC was constituted by the erstwhile Ministry of Petroleum, Chemicals and Fertilizers in 1978, to ensure smooth and effective functioning of offshore security arrangements. The OSCC is the apex body for reviewing and evaluating Offshore Security in India. The Committee was revamped and expanded in 2006 under the aegis of Ministry of Petroleum and Natural Gas. The Committee comprises of members drawn from the Indian Coast Guard, Navy, Air Force, IB, State Police, DG Shipping and ONGC, which meets every six months to examine issues related to the safety and security of offshore assets.